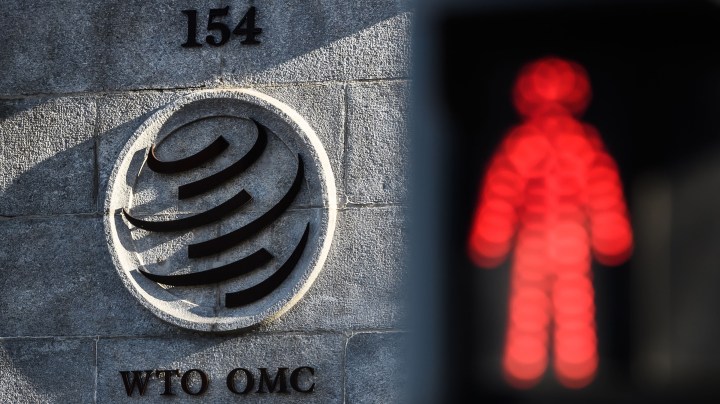 COPY
A red pedestrian trafic light next to the headquarters of the World Trade Organization (WTO) on December 10, 2019 in Geneva. Fabrice Coffrini/AFP via Getty Images

A red pedestrian trafic light next to the headquarters of the World Trade Organization (WTO) on December 10, 2019 in Geneva. Fabrice Coffrini/AFP via Getty Images
Listen Now

The World Trade Organization’s highest body is not functioning. The Appellate Body — think of it as a global supreme court for trade disputes — no longer has enough members serving on it to function.

The United States has been blocking replacements as panel members’ terms expire. There were seven at the end of the Obama administration and now, only one. Not enough, according to the rules, for the body to issue decisions.

The Trump administration’s objections to the WTO run from administrative qualms — that decisions take too long to issue, for example — to fundamental disagreements over sovereignty.

“There’s generally an objection that the appellate body is going beyond its mandate, creating law,” said Rachel Brewster, professor of law at Duke University, adding that in her view those objections “don’t have much credence.”

Brewster and other observers say the U.S. has been vocal in its criticisms but hasn’t been actively negotiating to reform the WTO, because, they say, the Trump administration believes it would be better off without it.

“The Trump administration is fundamentally opposed to a rule of law system in trade,” Brewster said.

The other 163 member countries who presumably still want the WTO to keep operating have a few options.

“It could be that the countries choose to exercise restraint,” said Jennifer Hillman, a senior fellow with the Council on Foreign Relations who used to serve on the WTO appellate body. Exercising restraint would mean countries might give up their right to appeal lower panel rulings at the WTO and, instead of appealing them, just live with rulings they don’t like.

“The other way that the European Union and Canada and Norway and others are proposing is to use, within the rules itself, an arbitration process,” says Hillman.

Both approaches have problems, said Richard Weiner, a partner at Sidley Austin.

“One is all parties to a dispute, including third parties, have to agree” to such workarounds, he said.

“The U.S. is a party to about 50% of proceedings and could object, and that would shut down the process.”

The WTO’s ability to settle disputes could be damaged for some time.

“It looks like it’s going to go on until a new administration changes its policy,” said Brewster. Until it’s resolved, more trade disputes might end up being waged the old fashioned way — through destabilizing trade wars and bare knuckled negotiation.