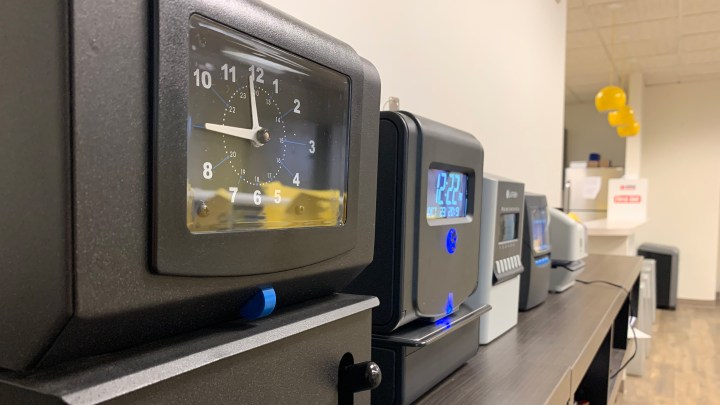 Atlanta-based Lathem Time Corporation had a good year in 1938. That’s when federal law began requiring employers to keep track of the comings and goings of workers eligible for overtime.

A century later, Lathem is still going strong, even as time is winding down on the mechanical time clock as we know it.

The clocks use “mechanical wheel technology to actually imprint and stamp the time,” said Lathem’s vice president of sales and marketing, Lance Whipple. That’s what causes the familiar “cla-thunk” when employees insert time cards into the gray metal box.

“You can find up to five Lathem time clocks in over 2,000 retail stores throughout the United States and Canada and North America,” Whipple said. “So we’re [really] proud of that.”

But the mechanical recording clocks are getting harder and harder to come by. This year, Lathem made the last of its 2100 Series machines.

“Two years ago, we made a very difficult decision that we were going to get out of the manufacturing of time recording machines completely,” said Bill Lathem. The mechanical parts and people to assemble them had become too costly.

The company trimmed 40 jobs, stopped assembling mechanical time clocks and outsourced the rest of its lineup.

These days, only a portion of Lathem’s revenues come from selling time clocks. Much comes from monthly subscriptions to cloud services that track and tabulate employee work hours.

The cloud-based time and attendance market is much more competitive than that of mechanical time clocks, said Nov Omana, chief operating officer of the International Association for Human Resource Information Management. To survive, he said, companies need to take the concept of “logging hours” to the next level.

“The ones that will distinguish themselves are the ones [that are] giving you, the customer, really strong analytic metrics and even predictive analytics,” Omana said.

In other words, companies won’t get by by selling systems that just tabulate and log worker hours. They’ll need to offer insights into how employees spend those hours and even predict what employees are likely to do, like taking time off.

Lathem is already working toward that future, and Bill Lathem predicts that technologies like biometrics and artificial intelligence will soon migrate to employees’ smartphones. Meaning no need at all for time clocks.

For now, employees still have to interact at least a little with machines. The latest iteration replaces paper time cards with employees’ index fingers.

“Employees simply put their finger on the sensor, and it’ll clock them in or out automatically,” Whipple said as the box — about as big as his hand — beeped to confirm a successful clock-in.