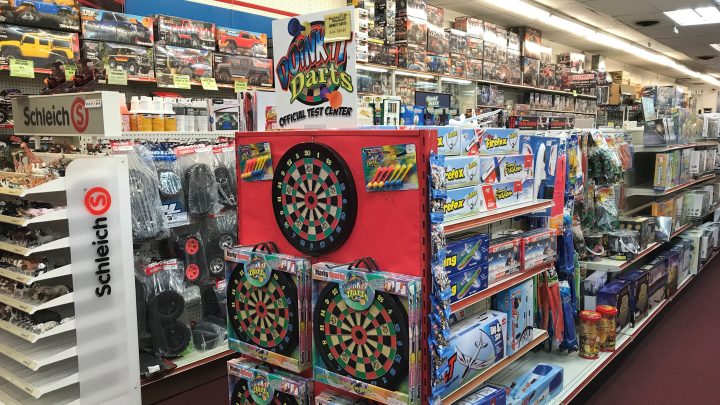 COPY
Much of what Hobby Works sells is from China — and destined for a 15% tariff scheduled to start Dec. 15. Nancy Marshall Genzer/Marketplace
The Season

Much of what Hobby Works sells is from China — and destined for a 15% tariff scheduled to start Dec. 15. Nancy Marshall Genzer/Marketplace
Listen Now

Hobby Works, a toy store in Laurel, Maryland, has an entire wall of puzzles, along with remote control planes, and lots of toy models of tanks, jets and artillery. Mike Brey, 55, owns it, along with a second location. He’s trim, energetic and a bit harried.

That’s not just because of the impending holiday rush. A lot of what Brey sells at his Hobby Works stores is from China, and a 15% tariff on toys made in China is scheduled to take effect on Dec. 15. Brey said this next round of tariffs would eat up almost half of his profits.

Take a model Soviet missile. The next time Brey places an order, the price for consumers will climb from around $46 to more than $50. And that’s a threshold he doesn’t want to cross.

“Forty-six dollars in a consumer’s head is, you know, they act differently than when it gets over 50 bucks,” Brey said.

As in, they put it back on the shelf. Brey said he’d shoulder a little of the tariff himself to keep the model under $50. Big box stores like Target have said they will force their suppliers to pick up those costs, but Brey doesn’t have their bargaining power. And so, he said, his customers will have to pay more.

Customers like Samim Manizade, who just bought four model rockets for his cousins. Brey told him they would go from about $24 to just under $30 if the tariff went into effect. Manizade said he’d still buy the rockets, especially since the price hike would be caused by tariffs.

“It’s more palatable than saying, ‘Oh, it’s a markup,’ where someone is price gouging along the way,” Manizade said.

That’s comforting for Brey, but he’s not just worried about his toy business. He also manufactures specialty carrying cases for things like remote control airplanes. The bags are made in China, and he now has to pay a 42% tariff, up from 17.6% last year. That added almost $9,000 to the latest order of about 2,000 bags.

Brey has thought about making his bags in Mexico to avoid the tariffs, but it would be a big logistical challenge and cost more. So he’s staying in China and hoping a trade deal brings those tariffs back down.

“It’s gambling,” he said. “You’re just guessing. Nobody knows what’s going to happen. Am I going to make a profit on this order or not?”

Or, Brey said, he might have to get out of manufacturing bags and just focus on toys.