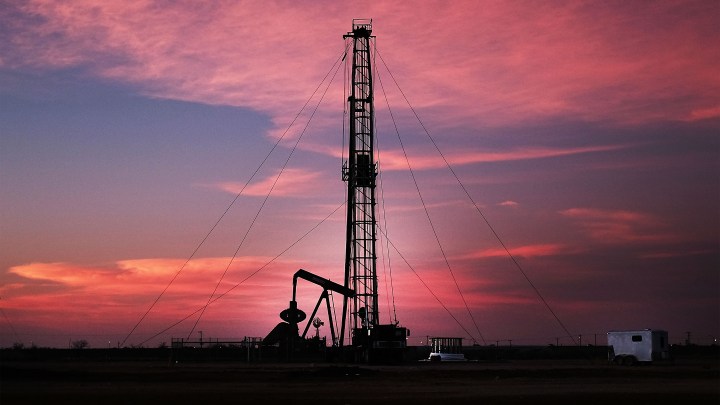 COPY
An oil boom in the Permian Basin has attracted a lot of workers. Above, an oil drill is viewed near a construction site for homes and office buildings in 2015 in Midland, Texas. Spencer Platt/Getty Images
Workplace Culture

An oil boom in the Permian Basin has attracted a lot of workers. Above, an oil drill is viewed near a construction site for homes and office buildings in 2015 in Midland, Texas. Spencer Platt/Getty Images
Listen Now

Last week the U.S. Commerce Department released new data on the incomes of Americans across the country for 2018. It’s a county-level look at where incomes are going up and where they’re steady or declining.

It reveals more evidence of a deepening income divide between urban and nonurban areas, but not just in the big, expensive cities that might come to mind.

“I think it’s been good for everybody around here,” said Jorge Hernandez, owner of the Midland Beer Garden. He said he’s seen business surge by about 20% each year over the last several years thanks to an oil boom in the Permian Basin that’s attracted a lot of workers.

“They drink when times are good, and people are out here and they’re spending money,” he said.

“It’s not as much of a difference in range as it was year-to-year before,” said Jeffrey Newman, an economist with the Commerce Department’s Bureau of Economic Analysis, which produced the data.

While incomes in both urban and non-urban areas grew by similar amounts, there’s a gulf between them when it comes to per capita income, averaging $56,000 in urban counties but just $41,000 in non-urban counties.

“We are learning that place matters a great deal for the economic opportunities that people and that families have,” said Ryan Nunn, who has been studying the disparity with the Hamilton Project at the Brookings Institution.

Cities of all sizes have generally fared better, Nunn said, as the economy has transitioned from manufacturing to service and knowledge-based work, which creates a kind of positive feedback loop.

Nunn’s research shows that counties that are almost entirely rural have among the worst wages, poverty and unemployment in the country.

Correction (Nov. 20, 2019): The broadcast version of this story misstated the rise in per capita income in Midland, Texas. The audio and web versions have been corrected.