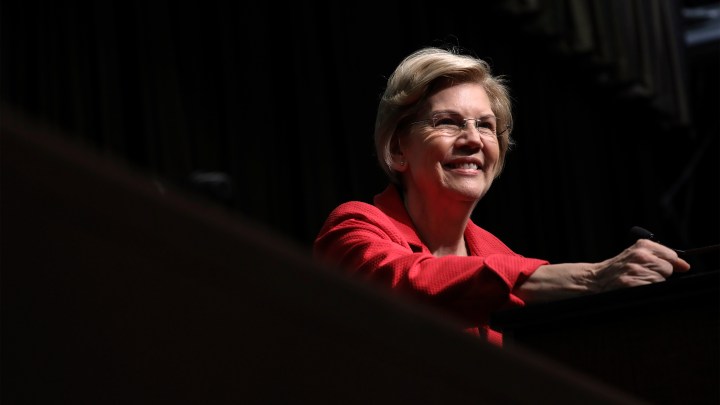 COPY
Sen. Elizabeth Warren has proposed a bill that would hold private equity firms accountable for the debt they accrue. Drew Angerer/Getty Images

The private equity industry and its critics will be answering questions in a hearing today before the U.S. House Financial Services Committee.

Democrats in Congress — including Sen. Elizabeth Warren of Massachusetts — have slammed some of the country’s biggest private equity firms for allegedly over leveraging and bankrupting companies they take over, such as Sears and Toys R Us. Warren has proposed legislation, the Stop Wall Street Looting Act, to reform the industry and make it more accountable to communities and workers it impacts.

Private equity firms gather investments from pension funds, foundations, wealthy individuals, sovereign wealth funds and the like. They buy up privately held and publicly traded companies, try to turn them around if they’re in trouble and then sell them off at a profit.

The firms often improve small and mid-sized companies’ long-term prospects through investment in new technology, management expertise and marketing, said Eileen Appelbaum at the Center for Economic and Policy Research and author of “Private Equity at Work: When Wall Street Manages Main Street.”

But Appelbaum, who is scheduled to testify at the House hearing, said the largest private equity firms often leave the companies they acquire weaker or even bankrupt.

“They mortgage the assets — real estate, any equipment that’s there,” said Appelbaum. “They use that as collateral, and they load them up with an enormous amount of debt.”

Warren’s bill would make private equity firms liable for that debt, along with pension obligations and other financial liabilities of the firms they invest in. It would also hike their tax rate to that for ordinary income rather than capital gains and increase protections for workers in the event of bankruptcy.

A representative from the American Investment Council, which advocates on behalf of the private equity industry, will appear at the House hearing. The group has recently launched an online ad campaign to promote the benefits of private equity.

The U.S. Chamber of Commerce has joined AIC’s pushback against Democratic private equity legislation. A new economic analysis published by the chamber concludes that Warren’s bill would lead to a decrease in private equity investment and firms, causing job losses and business failures to increase.

Bankruptcies like Toys R Us’ are unfortunate outliers, according to Tom Quaadman of the chamber’s Center for Capital Markets Competitiveness.

“Sometimes a turnaround just doesn’t turn around,” he said. “Opponents are cherry picking the failures. What is missed is the hundreds, if not thousands, of examples that have been successful.”

Quaadman points to private equity winners: Popeyes, Peet’s Coffee and Dunkin’, among others.