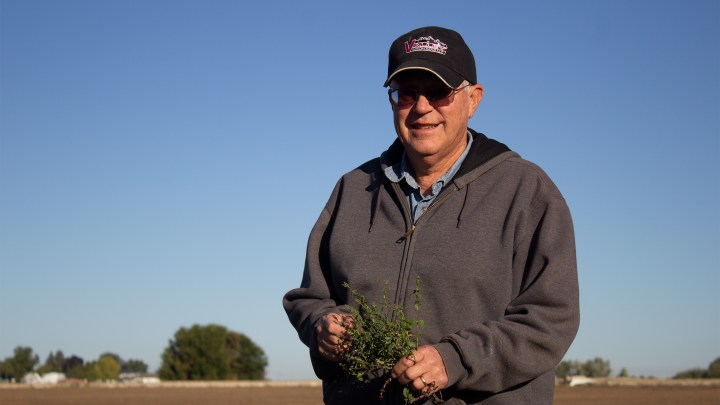 COPY
Recently-retired farmer Drew Eggers looks at a bunch of mint that was still growing at the edge of his field. Madelyn Beck/Marketplace

Recently-retired farmer Drew Eggers looks at a bunch of mint that was still growing at the edge of his field. Madelyn Beck/Marketplace
Listen Now

Drew Eggers plucked a patch of mint at the edge of one of his stubble fields in Southwest Idaho and offered it up for a whiff.

“You can smell the spearmint,” he said. It’s Eggers’s 41st year farming in Southwest Idaho, and his last.

“Two weeks ago, I had rented the farmland out to other farmers and so we’re starting retirement,” he said.

Eggers picked a good year to go out on, according to Garth Taylor, an associate professor at the University of Idaho. Last year, Taylor and others projected that Idaho farmers’ net incomes would keep slipping.

“And when (the U.S. Department of Agriculture) put out their numbers in September, we found — delightfully — that we were wrong,” Taylor said.

There were other factors at play. The trade war hasn’t had much of an effect on farmers in the Mountain West because they tend to export to Canada and Mexico more than China. Mountain West farmers also produce a wider variety of crops and products.

“I think generally it helps a state to have a more diverse mix,” said Carrie Litkowski, who studies farm income for the USDA’s Economic Research Service.

When farmers produce a lot of different things, they’re less vulnerable to price changes for a single commodity, Litkowski pointed out.

By contrast, Midwestern farmers tend to focus on just two crops: corn and soybeans. And the trade war is having a major impact on U.S. soybean sales to China, traditionally its biggest customer.

An improving dairy market is helping Mountain West farmers, too. After years of overproduction, supplies fell this year and prices went up, according to Rick Naerebout, chief executive of the Idaho Dairymen’s Association.

“Just recently, milk prices have gone above the break-even level to where dairymen are starting to make back make back some of that money that they lost over the last four years,” he said.

It’s not clear how long the good times will last, though.

“I hate trying to make any kind of forecast in the current political and trade environment,” said Michael Nepveux, an economist with the American Farm Bureau. “It’s one of those things that can change with a single tweet.”

Still, Nepveux said, farm debt across the nation is generally climbing faster than the value of what farmers own.

The weather hasn’t helped. There were torrential rains and flooding in the Midwest, while hurricanes have blasted the Southeast. Although the Mountain West is always threatened by drought, this year has been relatively clear.

Mountain West farmers have weathered plenty of financial and literal storms in the past, though. Drew Eggers in Idaho chalks his success up to planning.

“You know, a farmer anywhere needs to be a good business manager,” he said.

A little luck helps, too. Farmers in the Mountain West are hoping that an early frost won’t do too much damage to this year’s harvest.