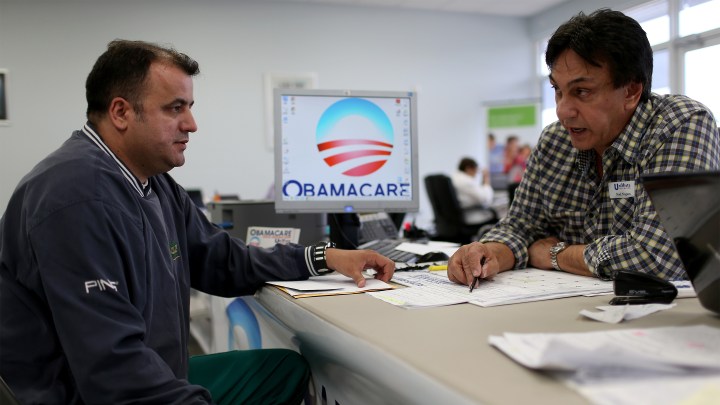 COPY
Big changes to the ACA are bound to cause confusion this year. Above, a man signs up for ACA insurance in 2015 in Miami, Florida. Joe Raedle/Getty Images

Big changes to the ACA are bound to cause confusion this year. Above, a man signs up for ACA insurance in 2015 in Miami, Florida. Joe Raedle/Getty Images
Listen Now

Thanks to the 2017 tax bill, consumers who decide not to buy health care plans won’t have a penalty added to their federal taxes. There are also new health insurance options outside the state and federal exchanges.

Like a lot of consumers, Alan Lastufka, 36, of Sandy, Oregon, is weighing his options. He’s been buying his health care on his state marketplace since it opened five years ago and his premium has gone up every year. This year is no exception.

Lastufka said it has been years since he’s seen a doctor. He’s thought about forgoing insurance altogether, but worries about what would happen if he had some sort of medical emergency. He said saving a few hundred a month isn’t worth it if he could face a massive hospital bill.

He could instead opt for a so-called “skinny plan,” also known as “catastrophic health insurance,” costing him less that $100 a month, around a third of what he pays now.

“That sounds more appropriate and more what I’m looking for,” Lastufka said. “I’m still young, I’m relatively healthy, I don’t have any ongoing medical issues and so getting a full-featured plan is not very important to me right now.”

Skinny plans, which can reject applicants with preexisting conditions and don’t have to cover prescription medication, don’t comply with the requirements of the Affordable Care Act. Resulting out-of-pocket expenses can run to hundreds of thousands of dollars.

“‘Skinny plan’ is the nice name for it,” said Elisabeth Benjamin, who advises people on health care plans for the Community Service Society of New York. “‘Junk insurance’ may be the more accurate name for it.”

The Trump administration expanded access to skinny plans last year as part of its effort to dismantle Obamacare. Benjamin said that’s leading to a lot of confusion online, with page after page of websites touting plans that could end up costing consumers tens of thousands of dollars during a health crisis.

The Affordable Care Act set aside funding for “navigators” who would help consumers pick the best plan, and the Trump administration has slashed that funding, too.

“Assistance from navigators, marketing outreach, may help [people] to make choices to enroll in health insurance coverage and without funding for that we may see fewer people enrolling,” said Christine Eibner, an economist at the RAND Corp.

Researchers have estimated that millions of people may go without insurance now that the individual mandate penalty is gone. Their departure would leave older and often sicker people in the pool, driving up premiums.

Jennessa Hooper, a 33-year-old from Richland, Washington, who has Crohn’s disease, said the idea of not having health insurance was “terrifying.”

She briefly thought about switching to a skinny plan, but she gets a subsidy to help pay for her ACA plan and the skinny plan wouldn’t be eligible for that subsidy.

“I need those tax credits because otherwise I can’t afford anything,” she said.

Parents with employer-based insurance are increasingly enrolling their children in Medicaid, or the federal government’s subsidized Children’s Health Insurance Program.

Pittsburgh-area resident Hannah Graves said she and her husband would have to pay $150 a month to cover their kids on his employer-provided plan. And, she added, they’d have to spend a lot of time on the phone with their insurer.

“Hey can you cover this, please? Or can you pre-approve this? Or what’s this bill that we got that we shouldn’t have gotten?” she said.

According to Harvard health economist Benjamin Sommers, there are a lot of reasons why parents are opting their kids out of employer coverage.

They include “the higher deductibles, the higher co-pays, the greater cost share premiums that workers are being asked to contribute,” he said.

Charlene Wong, a Duke University pediatrician and researcher, said that over the past decade, more families have been making that choice or, if their incomes are low enough, signing their kids up for Medicaid.

“The coverage benefits on many of the Medicaid, and particular the CHIP plans offered by different states, are better or more generous than what their children would have if they were covered under an employer sponsored plan,” Wong said.

Graves said there’s another benefit of CHIP: it has removed doubt when she and her husband have gone through periods of job uncertainty.

“So you don’t know for sure whether you’re going to remain employed and therefore have access to health insurance,” she said.

When they’ve switched jobs (and insurers and doctors) and they’ve been able keep their children’s health care constant by keeping them on CHIP.

On top of that, their income is low enough that CHIP coverage is free. Graves said that the $150 a month they save goes straight into her kids’ college funds.