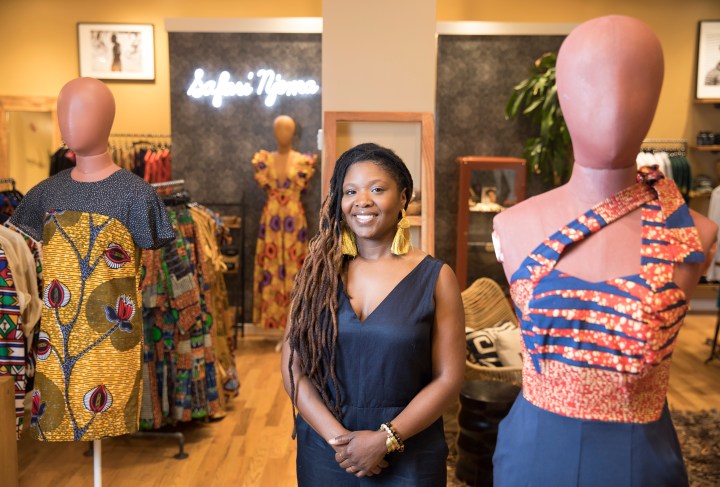 COPY
“I pay the living wage, but I want to pay so much more,” said Anika Hobbs, owner of Nubian Hueman, a fashion boutique in Washington, D.C. Tyrone Turner/WAMU

“I pay the living wage, but I want to pay so much more,” said Anika Hobbs, owner of Nubian Hueman, a fashion boutique in Washington, D.C. Tyrone Turner/WAMU
Listen Now

In some parts of the country, if you do business with the government with a contract valued at more than $100,000, or if you receive government funding, it’s the law to pay your employees a “living wage.”

The wage is based on a set of calculations and varies by region — it’s $14.50 in Washington, D.C., for instance — and is supposed to be the amount an individual must earn to be able to support themselves and their family. Businesses not affiliated with the government are not required to pay a living wage, but some choose to do so.

But as the nation’s capital gets more expensive to live in, some workers say $14.50 isn’t enough.

“What we accept as social norms is working all these hours and getting this wage and trying to piece money together, check to check, to try to provide — and it’s ridiculous,” said Jason Anderson, whose employer pays the “living wage” at Nubian Hueman, a clothing store in Washington, D.C.

The District’s rate dates back to 2006 and has been adjusted for inflation twice — once in 2016 and again this past January. The current amount is higher than the city’s minimum wage of $14 per hour, which became effective July 1. Under the law, the District’s minimum wage will increase progressively to $15 per hour on July 1, 2020 and will continue to rise each year starting in 2021.

“The minimum wage is a floor, and the living wage should be something that is much closer to what it really takes to live on,” said Ed Lazere, executive director of the DC Fiscal Policy Institute

“I believe in the vision“

In addition to his job at Nubian Hueman, Anderson, 44, has two jobs in the theater industry to help pay bills and support his two young children. He said he accepted the living wage job and has helped out in between his usual two weekly shifts because he supports his boss’s dreams for the African-inspired shop.

“When the employee and the employer are kind of on the same page, it’s easier to negotiate,” Anderson said. “Like, ‘I’m going to commit this much to you and your vision and your dream, but I’ve got these kids. Not putting pressure on you, but is there something that could be done?’”

For Anika Hobbs, owner of Nubian Hueman, paying a living wage is a small token of her appreciation for the handful of part-time employees she splits between the store’s two locations. But it’s often a sacrifice for her.

“I don’t get paid. There’ll be spurts of time when it’s like, ‘OK, we’ve got some good money’ — and the holidays is a really great time — so I’ll pay myself around that time,” she said. “It depends on where the business is that I’ll cut a check.”

Figuring out what it takes to cover one’s basic needs isn’t an exact science. Various researchers calculate cost of living differently, based on factors like rent, groceries and transportation. A formula developed by the Massachusetts Institute of Technology determines that a single person in the Washington region should be paid $17.64 per hour, $30.20 if they’re raising one child. According to MIT, the basic needs budget and living wage are as follows:

MIT’s living wage calculation doesn’t provide for income that would allow individuals to save and invest for the future. Researchers at the university say the living wage is the minimum income standard that, if met, draws a fine line between people who have financial independence and those that may need to seek out public assistance or endure food insecurity.

“Even if we update our living wage and/or create a standard for employers to try to aim for that’s tied to the living wage for a single person, we should remember that for the vast majority of people, if they have children, it’s still not a living wage for them,” Lazere said.

Waashington, D.C. is creating  a certification program in 2020 to encourage more businesses to pay a living wage. The Department of Small and Local Business Development has asked the organization Think Local First DC (TLFDC) to create a program that will certify small businesses that choose to pay a living wage as Living Wage Businesses, in the hope local shoppers will be inclined to patronize them.

“Large businesses may or may not qualify or it may not impact them as much because they have more resources. So, now the conversation is going from let’s highlight these businesses into what should be the [living wage] amount,” said Raj Aggarwal, co-founder of TLFDC.

Aggarwal said his organization is also looking at what other benefits small businesses provide, even if they can’t afford to pay employees the “living wage.”

“Are there other things that you’re doing as a business, like paying health insurance or providing for a 401(k), that should be calculated into this concept?” Aggarwal said.

At Nubian Hueman, Hobbs said she can’t afford to offer health insurance, but she does give her employees things like birthday gifts and discounts at the shop. She wants to provide more.

“I want to offer all those things and wrap around my team, so they feel like they don’t want to leave,” Hobbs said.

The question for her and for other small business owners is what they can afford to pay and survive in an increasingly expensive region.

A version of this story previously ran on WAMU 88.5.