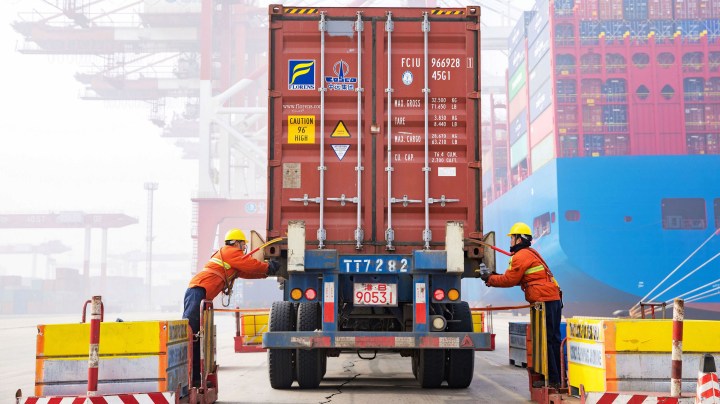 COPY
The IMF released a report saying global growth would be larger if the U.S.-China trade war ended. Above, workers prepare a shipping container at a port in the Shandong province of China in January, 2019. STR/AFP/Getty Images

The IMF released a report saying global growth would be larger if the U.S.-China trade war ended. Above, workers prepare a shipping container at a port in the Shandong province of China in January, 2019. STR/AFP/Getty Images
Listen Now

The International Monetary Fund released a report Tuesday noting that global growth would get a 0.8% boost if China and the U.S. dropped the various tariffs they have imposed on each other since 2018.

While 0.8% doesn’t sound like a lot, a number like that expands rapidly on a global scale, according to senior fellow at the Peterson Institute for International Economics, Gary Hufbauer.

“That’s, you know, like $800 billion,” he said. “It means adding to the world economy about as much as the Mexican economy is worth today.”

Mexico’s economy is the 15th largest in the world.

The IMF is anticipating that global growth will fall to its slowest rate since the financial crisis. And still some worry that the IMF’s forecast is too sunny.

“Although the headlines seem quite pessimistic in this report, the IMF is normally over-optimistic,” said Murray Gunn, head of global research with the market forecasting firm Elliott Wave International.