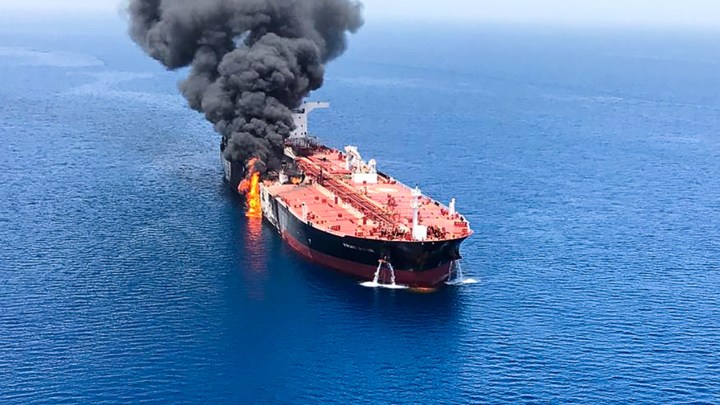 COPY
Fire and smoke billow from a Norwegian-owned oil tanker said to have been attacked in the waters of the Gulf of Oman in June 2019. AFP/Getty Images

Fire and smoke billow from a Norwegian-owned oil tanker said to have been attacked in the waters of the Gulf of Oman in June 2019. AFP/Getty Images
Listen Now

It’s a worrying time to be in the business of delivering oil in the Middle East.

Today, explosions reportedly rocked an Iranian oil tanker as it was steaming through the Red Sea. Details are murky — Iran initially indicated it was a missile attack but it’s unclear exactly what happened.

A string of recent tanker attacks — today’s would be the seventh since May if confirmed — is leading the tanker industry to take extra precautions and raise shipping and insurance rates in perhaps the most critical shipping area in the world.

“It’s an extremely concerning escalation of tensions, and in a region that has a very small room for error,” said Andrew Kinsey, marine risk consultant at Allianz.

He said oil ships are urged to defend themselves against mine, missile or pirate attacks.

“You’re looking at higher speeds, daylight transit, checking in, giving voyage plans so people know where you are. And trying to be that hard target,” he said.

Higher risk means higher prices to rent tankers in the Persian Gulf, the chokepoint for 30% of the world’s oil. Last week a tanker rental cost $85,000 a day, said James Jang, a maritime analyst and managing director at Aegis Capital. But he said the price is going up.

“So this is what I’m hearing from the shipbrokers,” he said. “They’re the middlemen between the producers and the shippers. The chatter around the rates right now is $200,000 to $300,000 per day.”

The price of insurance is going up, too. Oil vessels have to pay their insurers what’s called a “war risk premium” at times like this. And that premium has shot up, said Matt Smith at ClipperData, which tracks global oil flows.

“Since those events in May, we have seen war premium for vessels in the Middle East rising tenfold. We should likely only see those increasing as those incidents continue to occur,” he said.

Despite the nervousness on the oceans, and higher shipping and insurance rates, the price of oil hasn’t spiked. There are many factors in play there, including weak demand.

But Smith worries that tensions with Iran, Saudi Arabia, and the U.S. could yield more tanker attacks and potentially miscalculation and broader conflict.