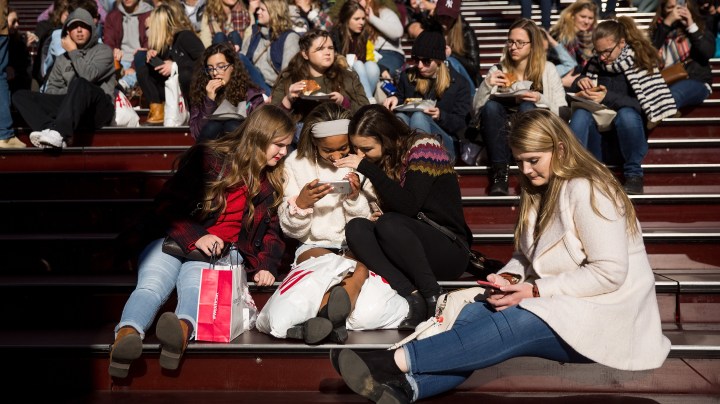 COPY
A group of teens look at a photograph they took on a smartphone in Times Square in New York City in 2017. Drew Angerer/Getty Images

A group of teens look at a photograph they took on a smartphone in Times Square in New York City in 2017. Drew Angerer/Getty Images
Listen Now

According to a new survey by the investment bank Piper Jaffray, American teenagers are spending less than they have since 2011.

Teen spending slipped 4% on 2018 to just under $200 a month, the lowest monthly spend by the average teenager in eight years.

Food and clothes were reportedly the two biggest spending categories; food for boys and clothes for girls. And although overall spending has fallen, teens continued to spend on technology, according to Mike Olson, senior research analyst at Piper Jaffray.

“Teens are interested in trying to ensure that they’re having all the devices that they need to keep up with their ability to consume the content that they want to consume,” Olson said.

Social media sites remain popular among teens. But today’s teenagers are consuming that content differently than the teens of a few years ago, said Jennie Vry Liu, executive director of Yale’s Center for Customer Insights.

“They’re really following people more than they are following brands,” she said.

Those people — influencers, celebrities, other teens — are driving spending on footwear and athlesiure wear. And handbags? Not so much.

“If you’re wearing casual clothes, that look doesn’t require accessories in the same way, so you don’t need a handbag,” said Barbara Kahn, a marketing professor at Wharton School of the University of Pennsylvania.

“You don’t need some of the fancy accessories which young people used to buy.”