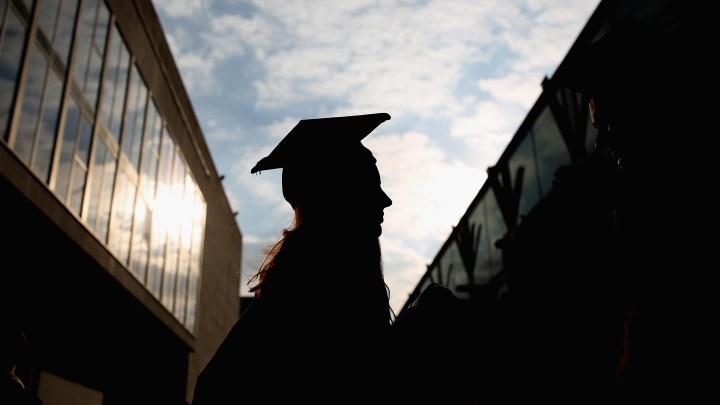 We’re in the midst of an ongoing national debate about the cost of higher education and how that’s shaping the lives of college students. But that’s the fiscal reality; the emotional reality of getting a degree can also be fraught, especially if you’re the first one in your family to go to college.

Heather Cantua Phillips is a lawyer working in the San Francisco Bay Area and was the first in her immediate family to get a four-year degree. She tells the story about how that degree has shaped her relationship with her family.

My name is Heather Cantua Phillips and I live in Alameda, California, and I am a lawyer.

I grew up in Livermore, California, as an only child to two parents who were high school graduates. Going to college was a goal that my mom always had for me.

Once I got to college, I had a really steep learning curve of figuring out how to play the game. You know, there are a lot of unwritten rules as to how you can act in college — when you approach a professor, what classes to take, how to prioritize things — and I sort of had to figure it out on my own.

Financially, my income is now substantially more than both of my parents had ever made combined. From a cash flow perspective, I feel much more financially secure than my parents, but on the flip side, I also feel less stable than my parents did. I think my parents have hope for the future. Even though they have experienced setbacks, they have built up a lot of equity in their house. They are now both happily recently retired.

I do think that I have anxiety about the economy that my parents don’t. First of all, it’s just much more expensive to live. So even with the increase in income, it doesn’t feel like I’m that much richer than my parents were. Combine that with, you know, my parents never had any college or professional school debt to pay off. So even though I’m making more money, I’m spending more money.

I don’t talk about finances much with my parents. I think one part of upward mobility that might get overlooked, or at least that I didn’t understand before, is that there’s a trade-off with that. Part of the trade-off is losing some of the deep relationships with your family that maybe you would have otherwise. My parents don’t have the ability to really relate to me when it comes to my profession. And I can feel it, and they can feel it. And so they mostly trust that I’m just taking care of myself, and I trust that they’re taking care of themselves.