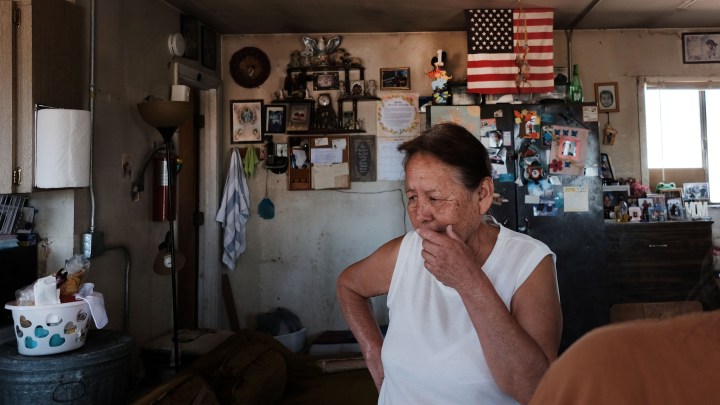 COPY
Marie Jones, a member of the Navajo Nation, receives her monthly water delivery in the town of Thoreau on June 06, 2019 in Thoreau, New Mexico. Spencer Platt/Getty Images

Marie Jones, a member of the Navajo Nation, receives her monthly water delivery in the town of Thoreau on June 06, 2019 in Thoreau, New Mexico. Spencer Platt/Getty Images
Listen Now

Today and tomorrow, some of the 2020 presidential candidates will take the stage in Sioux City, Iowa, to discuss issues affecting Native Americans.

Marketplace’s Kimberly Adams discussed the forum with Patrice Kunesh, assistant vice president and director of the Federal Reserve Bank of Minneapolis’ Center for Indian Country Development. Below is an edited transcript of their conversation.

Kimberly Adams: What are some of the economic issues that are top of mind for Native American voters?

Patrice Kunesh: I think at the top of the list are treaties and trust responsibilities. For decades, there’s been severe underfunding of these federal obligations that provide them basic means for survival on American Indian reservations, and that has really impact on infrastructure.

Adams: Let’s talk specifically about infrastructure. What are some of the conditions like on the reservations right now?

Kunesh: When I think of infrastructure, I mean the roads and bridges, water systems for clean water, broadband. We need broadband and internet connections for businesses, households and government services. There’s a very low rate of access in many areas of Indian Country.

Adams: Lots of the candidates have talked about economic inequality and economic mobility. How does that show up in Indian Country?

Kunesh: Most remarkably, and sadly, native women experienced the largest disparities in intergenerational mobility. But quite interestingly, we’ve found that native kids on or near the reservations show greater upward mobility. So we need to know what’s really going on there, because reservations may not be the commonly charged negative predictor of economic outcomes for native kids. There’s something there that, I think, is hinged on culture and community and identity.

Adams: What are some of the factors feeding into this struggle for economic mobility?

Kunesh: I think if you want to understand wealth and inequality in Indian Country, I think you have to understand the native land loss, of not just losing a piece of land but losing our home. So we need to understand that backstory. And so when we look at not just the land loss, but the way of life that was lost forever, we’re continuing to see ripple effects very, very deeply in our communities.