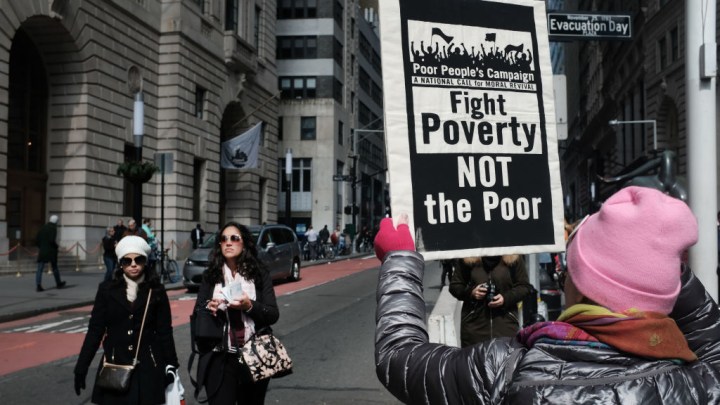 The wealth gap in this economy has been higher profile than usual lately. It has come up in the presidential race, and Federal Reserve Chair Jerome Powell has spoken about it. But closing the difference between the rich and the poor is obviously easier said than done, and it gets even more difficult when you add race into the mix. Maura Cheeks wrote about her own family’s past for the Atlantic. She spoke to host Kai Ryssdal about her reporting and her family’s story. The following is an edited transcript of their conversation.

Kai Ryssdal: I want to start up at the top of this. It’s a long piece, but right near the top, you talk about black wealth as being delicate, and I want you to explain what that means.

Ryssdal: So I can’t decide here, actually, whether I want to go to your dad — Maurice Cheeks, basketball player, now a basketball coach in the NBA for for many, many years — or your grandfather. And I think, really, what we have to do is go to your granddad, right?

Cheeks: Well, my grandfather started an HVAC company in Philadelphia. He started his company by selling air conditioners on the side while he was still employed with a full-time job, and eventually his side hustle, as I call it in the piece, afforded him the opportunity to be able to go out on his own. That was really the basis for my family’s safety net, was that, you know, him being the first generation of becoming an entrepreneur and really building that business. And, you know, moving us in to a nice neighborhood and a nice house. And I was given the opportunity to go to a fantastic school.

Ryssdal: Right. Except the house, then, it doesn’t end well, right?

Cheeks: In that particular instance, it did not end well, and for me it was very illuminating to be one of few black students in the school, and then suddenly I’m going through the process of us having to sell our home. And so having to sell that really opened my eyes to the fact that, you know, we didn’t really have a substantial safety net. And the reason for that partly is because of the policies that have affected African Americans for generations.

Ryssdal: Well, so let’s talk about some of those, right? And why was it that your grandfather has a business deal go bad, which is what happened, and you lose the family house. Structurally, what has happened in this economy to make, as you say, African American wealth so fragile, so tenuous?

Cheeks: Well, I mean, I think that, you know, I write a lot about data from the Panel Study of Income Dynamics, which is the world’s longest-running longitudinal household survey. And a lot of researchers have analyzed this data. You know, they found that the family circumstances of black middle-income Americans results in black families having 27% less wealth than their white counterparts. If you look at these numbers, it’s pretty apparent that the wealth gap isn’t an accident because of the lack of intergenerational wealth in black families.

Ryssdal: So let’s get now to your dad. Maurice Cheeks, as I said, played in the NBA. Made decent money for his time, but not exceptional money, right? And you write that the first thing he did when he started getting pro basketball paychecks was literally to send money home.

Cheeks: Yeah, and you know, I don’t want to make it seem like we’re victims and we’re not fortunate for where we’ve come from. I mean, he has done amazing. He’s in the Basketball Hall of Fame. He is successful. In a lot of cases, we look at these success stories and we think, “Well, they’ve made it.” And that isn’t the case. I mean his mom, my grandmother, was still living in the Robert Taylor Homes in the housing projects. And so that factors into wealth as well.

Ryssdal: Do you feel fragile?

Cheeks: I do not, but that’s the result of my family. And I think if you look at white counterparts in my same position, they would feel a lot more stability than I feel. And I think that that is a result of the fact that my family, like many, many African American families, are still, you know, grappling with the realities of the policies, and to be frank, the legacy of slavery.

Cheeks: Black people, for a very long time, were considered the wealth of this country. And so until we acknowledge that, I think there is still going to be issues with the way we talk about closing the wealth gap in a meaningful way.