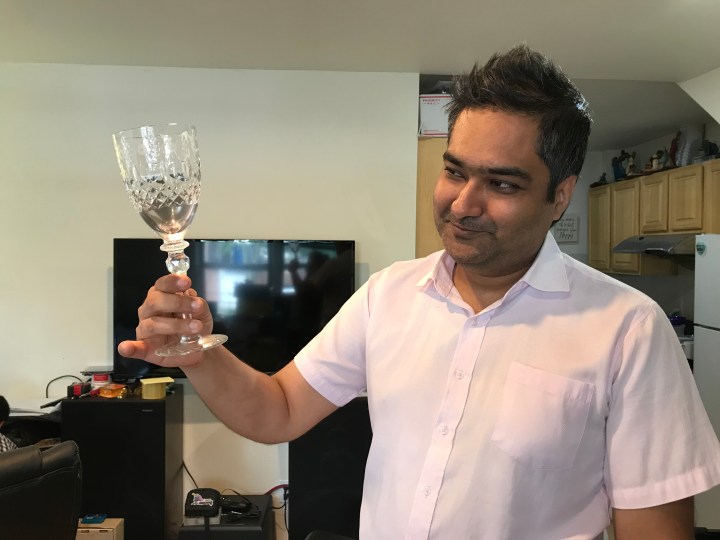 COPY
Naveed Ahmed uses his living room to sort through returned merchandise from pallets he bids on online. He says he makes between $150 and $200 in profit on each pallet he buys. Leila Goldstein/Marketplace

Naveed Ahmed uses his living room to sort through returned merchandise from pallets he bids on online. He says he makes between $150 and $200 in profit on each pallet he buys. Leila Goldstein/Marketplace
Listen Now

Nina Frank Williams of Portland, Maine loves the experience of sifting through secondhand clothes at Goodwill. But when it comes to finding jeans with that perfect fit, she turns to the internet.

“In Maine, there’s not a lot of brick and mortar stores,” she said. “I really like Levi’s jeans and they have a lot more selection online, as far as the styles go.”

She recently ordered three different pairs of Levi’s. Two weren’t right, so she sent them back. Williams was curious about what happened to her return.

“Where does it end up? Does it get resold? Does it get trashed?” she asked. “What’s the life of this returned merchandise?”

Her guesses are on the right track. Some returns might be put back on store shelves, others end up in a landfill, some are sold in bulk and some are donated. None of that is unusual. What is new is the amount of returns retailers are dealing with because of online shopping. Ecommerce sales in the US topped $500 billion in 2018, up almost 15% from the year before.

“Return rates on online sales are much higher than return rates from brick and mortar sales: three, four, five times higher,” said Jordan Jakubovitz, the head of product marketing at Optoro, which makes software to streamline the returns process. Its clients include big retailers like Target and Best Buy. Jakubovitz says the kind of automation that makes shipping orders so efficient is just not possible when returned items go back to the retailers.

“Returns don’t come back neatly packaged in pristine boxes,” he said. “You might get a truck at the warehouse that has a laptop on it, and it has a lawnmower, and it has a T-shirt and, it has a bouncy ball.”

So retailers make use of data analytics to reduce costs when sorting returns. Instead of putting every item through the same returns process, software systems help retailers determine which items are worth spending the resources to repair and repackage and which should be donated or liquidated.

Companies are also harnessing the internet to quickly liquidate the vast number of returns. Retailers bundle up returned merchandise and auction it off to resellers on sites like liquidation.com and bstock.com. This is where the treasure hunt comes in.

In his living room in Queens, New York, Naveed Ahmed sorts through a recent shipment. The furniture is covered with boxes of Amazon and Walmart returns. Stacks of DVDs form mini towers on the floor and a set of Ralph Lauren crystal drinking glasses rests on the couch.

Wooden pallets stacked four feet high with merchandise get delivered to his curb. Each one generally costs between $400 and $800. He does get to see a list of what is included before he bids, but the condition of the items is not guaranteed.

“Somebody just bought this. It’s all brand new,” he said, opening up a Milwaukee drill bit set from a pile of tool kits. “They took out one piece that they needed and they shipped all of this back.”

Once he inspects everything, he will donate the low quality items and trash the broken things. He pays for electronic waste to be taken away and also spends $900 a month on a storage unit.

The good stuff? He reboxes and resells it on Amazon and eBay.

He says he can make between $150 and $200 in profit on each pallet of returns. But there’s always the possibility that the things Ahmed sells will also get returned, which is hard on his business.

“Being a seller, I understand how painful it can be [to get returns] and how it can make or break businesses,” he said.

That has changed the way he shops for himself. Even though Amazon returns fuel his business, he says in the last year he hasn’t personally returned a thing.