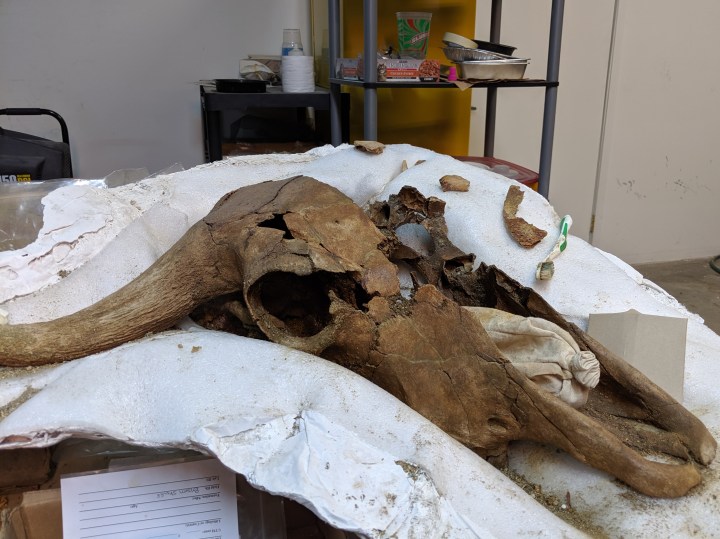 Long before Hollywood cooked up movie versions of dire wolves, mammoths and saber-toothed cats, these beasts roamed what’s now known as Los Angeles, California. Even back in the Pleistocene era, more than 10,000 years ago, LA had good weather that brought in a diverse group of inhabitants — and the type of rock conducive to preserving their remains.

As the city builds miles of new subway lines, contractors are digging up millions of cubic feet of that rock, and paleontologists are finding thousands of new fossils.

In a cinder block warehouse in Riverside County, Cogstone Resource Management — LA Metro’s paleontological contractor — stores fossils found in expanding the city’s transit system. In the backroom of the company’s unmarked lab, finished and cleaned bones sit on metal shelves, while fossils in other states of preparation clutter tables and floor space.

“Any animal you can think of from the ice age, we have found them, plus the ones you don’t think of,” said Ashley Leger, a Cogstone paleontologist.

How to extract fossils from the subway

Construction workers with bulldozers and other heavy machinery work 60 feet below Wilshire Boulevard, one of the busiest arterial roads in the U.S., digging out a new subway station. Bethany Ader, another Cogstone paleontologist, follows them on foot. She’s looking for fossils.

If she sees the right signs, Ader will signal for workers to dig elsewhere so she can look more closely at the site. If she finds a potential fossil, possibly just a nub of bone peeking out of soil, or a rock that’s too light to actually be rock, Ader will record the location and begin extracting the fossil. If it’s fragile, her crew will build a plaster jacket around the fossil so it will not break in transit back to the lab. For a heavier find, the construction crew might help get it out of the ground.

Back at the lab, Cogstone technicians will remove any plaster jacket and then begin the painstaking process of removing the dirt. Mike Morris uses a set of dental tools, including picks and a toothbrush. Sometimes he will blow air through a straw to push dust away from his work. Often, sediment closest to the bone will have hardened to a cement-like crust. Morris will use another tool, essentially the world’s tiniest jackhammer, to chisel down to the bone.

Paleontologists at Cogstone bestow names on their most significant finds. The core of the horn from a species of giant bison is “Andy.” The almost-intact pelvis of a giant ground sloth, with a cavity in the middle large enough for an adult human to crawl through, is “Shakira,” because “her hips don’t lie,” Leger said.

The prize subway fossil thus far, though, is “Hayden,” the nearly complete skull of a juvenile Columbian mammoth.

“Hayden is a big deal. To find a juvenile nearly complete, with both of its tusks still in socket, is unfathomable,” Leger said. “It is literally, like, the dream. It is the thing you want to find in your career.”

Paleontologists say the main way they find fossils in California is from construction projects, such as this subway. State law requires developers to plan for how they’ll avoid or mitigate damage to fossils as they dig. But most states lack those protections.

“It’s a completely different experience out here. In the rest of the world, you rely on luck and generosity [to preserve fossils],” said Leger. “If you were to build this same subway in Oklahoma, you can legally bulldoze these fossils, which is heartbreaking.”

Oregon is one state where paleontologists rarely receive fossils from new development, according to Edward Davis, curator at the Museum of Natural and Cultural History in Eugene.

“I’ve been in Oregon about 12 years now. I’ve gotten maybe one set of fossils from a mitigation-related project,” said Davis. “It’s disappointing, from a science perspective. I think it’s disappointing, a little bit, from a prehistoric preservation perspective as well.”

Preserved at the museum

All of the fossils from the subway will be given to the Natural History Museum of Los Angeles.

Only the prettiest, most well-preserved fossils go on display for visitors — it’s possible Hayden could join them — but most of the subway fossils will end up on the museum’s top floor in the rows of wooden cabinets that make up the museum’s collections.

“Then it’s part of the record. That’s what we try to store here and keep track of, so it’s available to current and future generations,” said Sam McCleod, a paleontologist at the museum.

Paleontologists say even the smaller bone fragments — that would never make sense to display — help them understand history and how life evolved.

“A lot of the research that we’re doing now, especially on [ice age mammals], is trying to understand the history of extinction of those groups,” Davis said. “Understanding those extinctions and their relationship to changing environments and the arrival of the first Americans, can help us understand how to better steward resources.” 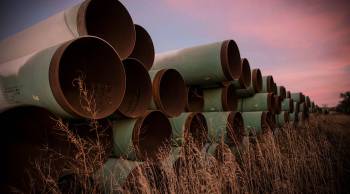