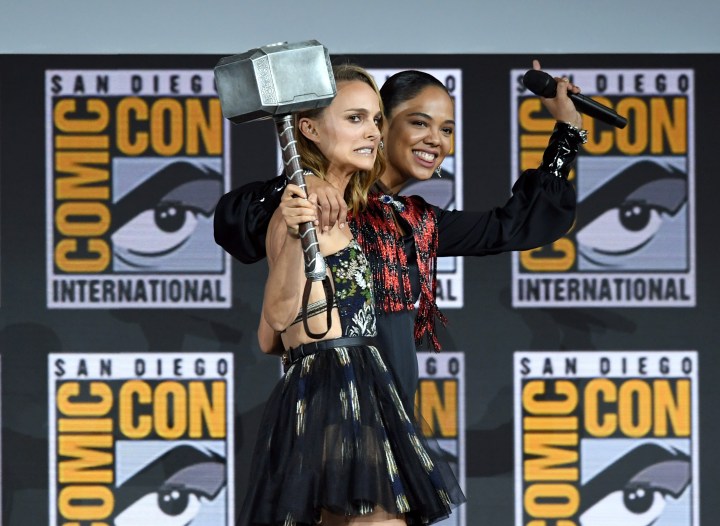 Marvel announced some new milestones as it presented its upcoming Phase 4 of the Marvel Cinematic Universe at San Diego Comic-Con. The new slate of films will include the first ever Asian superhero in a lead role in “Shang-Chi” to star Awkwafina and Simu Liu, the first deaf superhero in “The Eternals,” starring Lauren Ridloff alongside Salma Hayek, Angelina Jolie and Kumail Nanjiani, and the first openly gay superhero in “Thor: Love and Thunder,” in which Tessa Thompson’s character Valkyrie will be out as a lesbian and the title character will be gender-changed to be played by Natalie Portman.

Marvel fan Dallas Schwab, 24, has seen plenty of homophobic references onscreen, like in the 2002 “Spider-Man” in which the hero — then played by Toby Maguire — makes a pejorative comment about a male opponent’s unitard, saying “that’s a cute outfit. Did your husband give it to you?”

“I watched that in the theater when I was a kid as kind of an insult,” said Schwab. When he heard that the upcoming Thor installment will feature a lesbian storyline he was encouraged.

“To have a movie franchise like Marvel be so big and to really lean into the representation I think is going to be extraordinarily meaningful to people,” he said.

That can translate to more lucrative returns for the studio as well. Darnell Hunt, a professor of sociology at UCLA who tracks diversity in Hollywood, said films with broader representation perform better at the box office.

“Let’s face it — everything that we’ve seen in our studies suggest that audiences want to see this, and they will go and they will support these films,” he said, noting the trend set by the massive success of “Black Panther” and “Crazy Rich Asians” will only intensify.

“The present and certainly the future — as America becomes more diverse— will be dependent upon having films that are populated with characters that look like America,” he said.

“Audiences are really savvy now they want to see authentic storytelling,” she said. “They want to see parts of the story that really embrace and reflect their lived experiences.”

And that means increasing diversity behind the scenes as well. Marvel has announced it’s bringing on diverse directors and writers for their upcoming films, including Chloé Zhao, Taika Waititi and Destin Daniel Cretton.

Dallas Schwab said he’s not yet sure he’ll run to see the new Thor movie just because of a diverse character, “unless they make it kind of a sticking point in the movie and not just an afterthought.”

But done right, the move could recruit a whole new legion of fans to the Marvel universe.