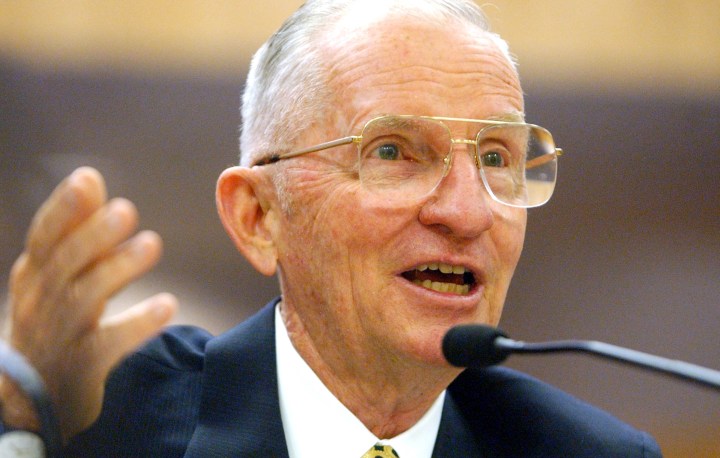 H. Ross Perot, the colorful, self-made Texas billionaire who rose from a childhood of Depression-era poverty and twice ran for president as a third-party candidate, has died. He was 89.

Perot may well be best remembered as a third-party presidential candidate. But before he took to the campaign stage with charts and graphs — along with memorable lines like “that giant sucking sound” to describe what he believed NAFTA might do to the U.S. economy — Perot built Electronic Data Systems, a company that helped other companies manage their computer networks.

Perot worked in sales at IBM in the late 1950s, back when computers took up entire rooms. Gerald Posner, author of the biography “Citizen Perot: His Life and Times,” said that’s when Perot realized those huge computers could start digitizing the reams of paperwork filling up offices around the country.

“It wasn’t reinventing a new wheel,” Posner told Marketplace. “He just found a way that the wheel could be pushed a little bit faster, and that’s how he came up with Electronic Data Systems.”

“EDS said: We will furnish you the hardware, we will operate your computers, we will build your computer center and we will just give you the reports you need,” said Richard Shlakman, who spent years as EDS’s general counsel.

“Companies that were buying these huge computers didn’t have the vaguest idea how to run them or how to get the most out of them,” Shlakman said.

Eventually, said Posner, other companies recognized that, too, and started using EDS to launch their own services, such as payroll processing.

“There was sort of an ancillary group of industries that grew off of Perot’s core business,” Posner said.

As a boy in Texarkana, Texas, Perot delivered newspapers from the back of a pony. Yet the most famous event in his career didn’t involve sales and earnings; he financed a private commando raid in 1979 to free two EDS employees who were being held in a prison in Iran. The tale was turned into a book and a movie.

Perot’s wealth, fame and confident prescription for the nation’s economic ills propelled his 1992 campaign against President George H.W. Bush and Democratic challenger Bill Clinton. Some Republicans blamed him for Bush’s lost to Clinton as Perot garnered the largest percentage of votes for a third-party candidate since former President Theodore Roosevelt’s 1912 bid.

His second campaign, four years later, was far less successful. Perot was shut out of presidential debates when organizers said he lacked sufficient support. He got just 8% of the vote, and the Reform Party that he founded and hoped to build into a national political force began to fall apart.

But he continued to speak out about federal spending for many years. In 2008, Perot launched a website to highlight the nation’s debt with a ticker that tracked the rising total, a blog and a chart presentation.

In September 2011, Forbes magazine estimated Perot’s wealth at $3.5 billion and ranked him No. 91 on its list of richest Americans.