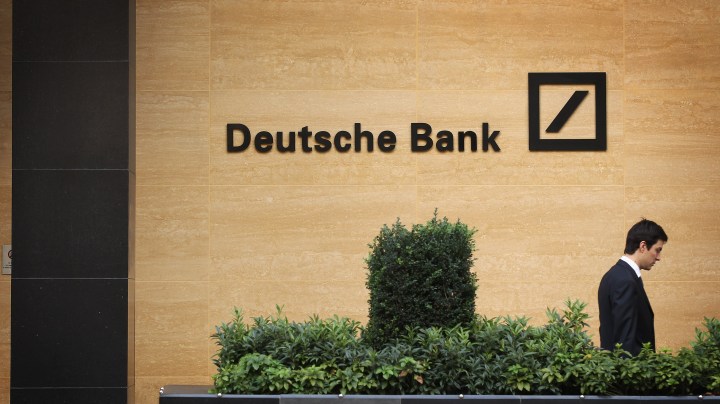 German banking giant Deutsche Bank announced it is cutting 18,000 jobs over the next few years. The layoffs are part of a big overhaul at the bank, which also said it’s going to pare down its investment banking division and basically exit the stock trading business.

The bank says it will focus on retail banking and wealth management — in sharp contrast to its ambitious global expansion in the 1990s.

“Deutsche Bank was among many that tried to establish a significant footing and a meaningful business in the U.S.,” said Anil Shivdasani, a professor at the University of North Carolina’s Kenan-Flagler Business School.

That expansion also placed the bank in direct competition with big U.S. banks with decades of experience in investment banking and stock trading.

“If you’re trying to expand in an area that you have no presence, you are not going to be getting the best deals, because you’re not established,” said Nate Tobik, the founder of Complete Bank Data.

“Some of the professionals there have been involved in LIBOR manipulations, foreign exchange manipulations, money laundering scandals,” Rodríguez Valladares said.

European banks, in general, are also facing ongoing recovery from the financial crisis. Shivdasani said that after the crisis, the U.S. was faster than Europe at making its banks undergo stress tests.

“As a result, the European banks were not under the same pressures to build up their capital ratios, coming out of the financial crisis, as the U.S. banks were,” Shivdasani said.

Still, with Europe’s economy slowing, and interest rates at rock-bottom levels, he said it’ll be harder for Deutsche Bank to make money on loans.