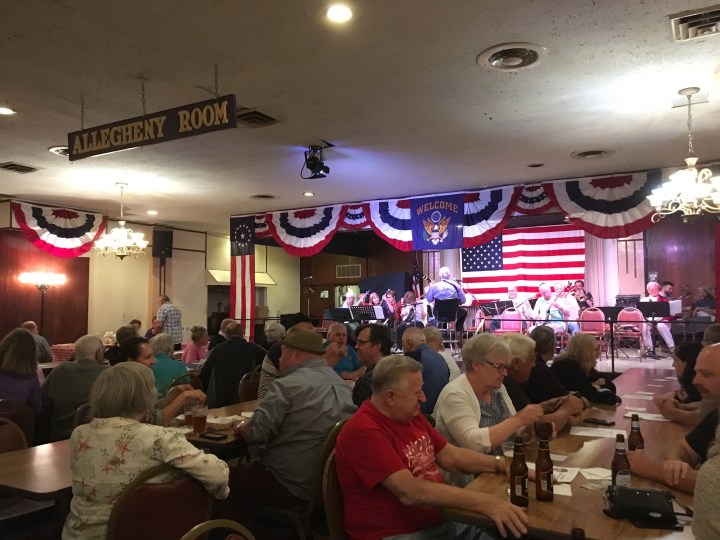 COPY
Many of the regulars at The Allegheny Elks Lodge in Pittsburgh had a love/hate relationship with their 65th birthdays. Erika Beras/Marketplace

Many of the regulars at The Allegheny Elks Lodge in Pittsburgh had a love/hate relationship with their 65th birthdays. Erika Beras/Marketplace
Listen Now

For a lot of people, turning 65 is a kind of love-hate experience. At the Allegheny Elks Lodge in Pittsburgh, Pennsylvania, the people who’ve seen their 65th birthdays come and go refer to themselves as “geezers.”

For Linda Nehrer, who turned 65 nine years ago, the 65th birthday came and went. She continued working as a school administrator, spending time with her friends and singing with bands. Still, she says, when she thinks of her age: “Some days I don’t like it as much as other days.”

“I actually couldn’t wait till I turned 65 so I could collect social security,” Azinger said.

Medicare also kicked in on Azinger’s 65th birthday, because of something set in motion by President Franklin D. Roosevelt back in 1935. That was the year Roosevelt signed the Social Security Act and the idea of federal “old-age benefits” became a reality. The age selected for these benefits to begin was 65.

“There was nothing at all magical about age 65,” said Edward Berkowitz, a retired history and public policy professor. But, Berkowitz says, that age was practical.

The country was in the throes of the Great Depression. Adult children who had traditionally taken care of their parents in old age no longer could. Roosevelt believed a social security program would solve that problem and he also put an expiration date on work, which made it easier for younger people to join the labor force.

To get Congress to agree to pass this transformative bill, concessions had to be made and one big question had to be answered.

“What is old age? When does it start? They knew it doesn’t start the same for everyone but they had to come up with a plausible proposal,” Berkowitz said.

Age 60 was too young; too many people would qualify, which could bankrupt the system. But 70 was decided to be too old; many people might not live that long. So, the drafters split the difference and settled on 65.

Once the Social Security Act was in place, according to Dora Costa, an economic historian at UCLA: “It really did say ‘OK, this is when you basically become old. It’s age 65.’ It did sort of kind of enshrine this.”

The law had a ripple effect. The idea that everyone should retire at a certain age started showing up in popular culture, like in the 1930s radio drama “Mama Bloom’s Brood.”

The federal government created public service announcements to reassure people that it was safe to retire, that they would be taken care of.

Private companies started handing out gold watches when employees retired at 65. Annuities and other investments were designed around that number. People started planning for life after work. By the time President Lyndon Johnson signed Medicare into law in 1965, there was no question that eligibility for that new federal program would begin at 65.

The original Medicare budget was about $10 billion. Now, with nearly 60 million Americans on the rolls, the tab is more than $700 billion. Historian and gerontologist Andy Achenbaum says a rising social security bill wasn’t what lawmakers expected.

“Now we have it where people tell me: ‘I’m going to live to be 90.’ I think that was sort of inconceivable to many people, except really far-sighted people, in 1965, and we haven’t really adjusted to that,” Achenbaum said.

It wasn’t just politicians who couldn’t imagine that future. When The Beatles’ Paul McCartney recorded “When I’m 64,” he was in his 20s. But he was already starting to feel his age.

He’d written the song as a teenager, so he had his producer speed up the tape so his voice would sound thinner and higher.

McCartney is now well past 64. In fact, he recently turned 77. But retirement? Nope. He’s currently on tour.