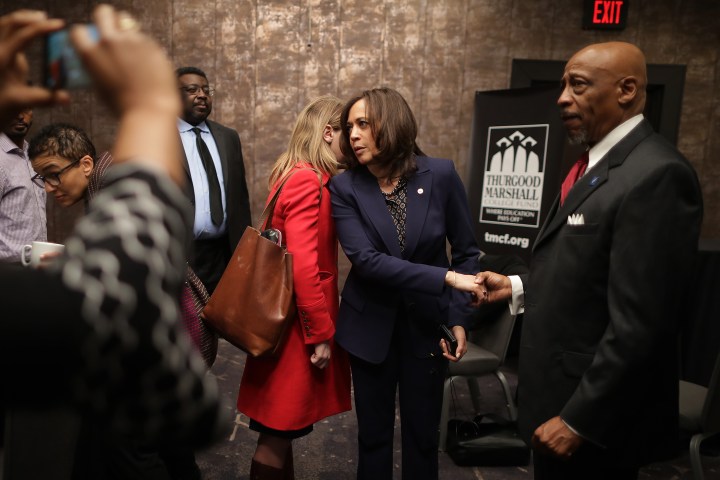 COPY
Democratic presidential candidate Sen. Kamala Harris (D-CA) talks with a member of her staff while meeting with leaders from historically black colleges and universities in Washington, D.C. in February. Chip Somodevilla/Getty Images

The race to become president is well underway, with more than two dozen Democratic candidates already vying for their party’s nomination. As more candidates opt in, there are also more job openings for campaign staff. This year’s group of strategists, press staff and campaign managers is different from previous election cycles: it’s more diverse.

According to recent analysis, more women and people of color are joining in the race than ever before. Jennifer Lawless, commonwealth professor of politics at the University of Virginia, spoke to Marketplace host Kimberly Adams about what seems to be driving the change. The following is an edited transcript of their conversation.

Lawless: The biggest difference is gender. Until this election cycle, we certainly have been far from legitimate gender diversity when it comes to the people occupying the top tier of congressional campaign roles. And this cycle, among the Democrats, there are many many women working not only as campaign managers, but also as high level operatives. And that represents a fundamental change from the past.

Adams: Can you tell me a little bit more about what drove that increased number of women into the pipeline?

Lawless: I think it’s a few different factors. The first is that it’s a matter of simple patience. The women that have been working in presidential politics for the last 10 or 12 years now have the kind of experience to make them well positioned to get these top jobs. But part of it is certainly enthusiasm and energy on the Democratic side of the aisle surrounding the importance of diversity. And so in the 2018 midterms we saw more female candidates run than we’d ever seen before. It’s not a surprise that we’re also seeing more women step up to run the campaigns among the Democrats as well.

Adams: You mentioned that the biggest change in diversity that we’re seeing is in regards to gender. What else are you seeing?

Lawless: There’s racial diversity, there’s gender diversity. There’s also increased diversity in terms of the different kinds of backgrounds and credentials that campaign managers have. And something that I would note here is that the Democrats have two dozen people running for president. That creates a lot of opportunities for people that might not typically look the part, or seem the part, to play a really important role in presidential politics.

Adams: What trends are you seeing in regards to racial diversity on the Democratic presidential campaigns?

Lawless: We’re seeing an uptick in terms of high level professionals working in presidential politics among the Democrats as well. Something that I would note that makes racial diversity a little bit different than gender diversity is that women aren’t monolithically Democratic. So, when it comes to racial diversity, almost every African-American, almost every Latino in elected office today, is a Democrat. And so, when you have a lot of Democratic candidates run, that really opens the door for a lot of African-American and Latino voters to get enthusiastic, and also for operatives to get jobs.

Adams: Given that we are seeing more women and people of color on the campaign staffs of the Democratic candidates, what has it changed in regards to how they’re running their campaigns or the policy proposals they’re putting out?

Lawless: It’s too early to tell. We’re focused on these campaigns and we’re focused on the nuances of policies, but at this point we, with the exception of a few candidates, don’t know much about those kinds of nuances. The first debates will be a good opportunity for the candidates to begin to flesh out some detailed plans. But at this point, I think it’s sending a signal to the voters, and to the Democratic Party more broadly, that they’re walking the walk. They’re not just saying that they want to make sure that they represent all Americans, they’re actually making sure that their campaigns symbolically represent all Americans as well. As far as policy differences and rhetorical differences, I think that will become a lot more obvious over the course of the next few months.