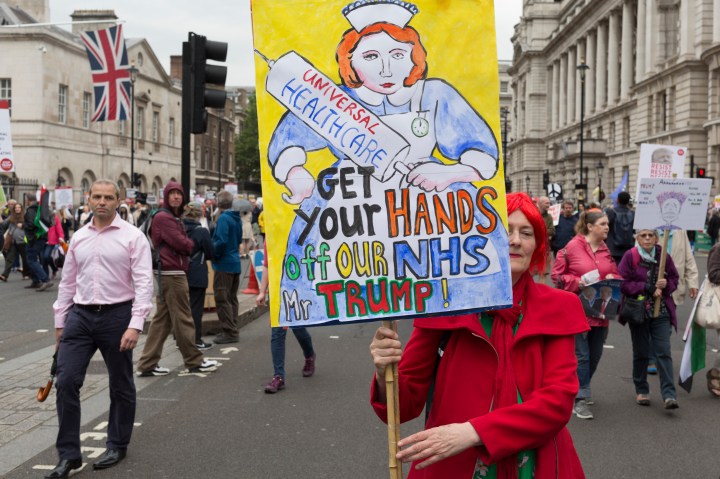 COPY
On US President Donald Trump's second day of a controversial three-day state visit to the UK, protesters voice their opposition to the 45th American President, (Photo by Richard Baker / In Pictures via Getty Images)

On US President Donald Trump's second day of a controversial three-day state visit to the UK, protesters voice their opposition to the 45th American President, (Photo by Richard Baker / In Pictures via Getty Images)
Listen Now

When it comes to trade negotiations, the definition of “on the table” seems to be up for debate … at least when it comes to putting Britain’s National Health Service — and it’s $125 billion in spending a year — on it.

At a press conference with Prime Minister Theresa May on Tuesday as part of his state visit to the United Kingdom, U.S. President Donald Trump said that everything — including the NHS — is fair game in any future bilateral trade talks between the two nations. But seconds after Trump’s comments, Health Secretary Matt Hancock tweeted, “The NHS isn’t on the table in trade talks — and never will be. Not on my watch.”

Privatization of the NHS — a taxpayer-funded health system that provides care to everyone regardless of their ability to pay — is a controversial issue in the U.K.

Supporters argue it increases patient choice and competition and helps reduce wait times to see doctors or receive treatment. But critics say that the competitive bidding process to outsource various services — like elective surgeries, providing medicines and equipment, or running hospitals — undermines the NHS’s core value of providing equal care for every person of any means.

But, politics aside, the big question is: Because the NHS already looks to the outside, is it possible to be more open to private investment?

Last year, Britain’s Department of Health reported the NHS spent nearly $280 million on outsourcing, which was roughly $100 million less than it spent the previous year. Current law requires the NHS to open bidding to private companies on any contract worth more than $779,741.81. This year, 19 new contracts worth $45 million have been put to tender.

Among the bidders for such contracts — which include multinational corporations like UnitedHealth Group and HCA, as well as medical colleges and universities — is billionaire businessman Richard Branson’s Virgin Care. Over the last five years, the company has secured more than $2 billion in NHS contracts to provide services like school immunizations, health care in prisons or elderly dementia care. In fact, the company has become one of the country’s biggest health care providers, according to analysis conducted by the Guardian newspaper.

So when it comes to future trade negotiations, aside from widening the pool of services available for outside companies to bid on, there’s not much more opportunity that could be included in any new deal with the United States, according to Mark Dayan, policy analyst at health think tank Nuffield Trust. He said between 8% and 15% of NHS services by value are already delivered by the private sector.

“European Union law sets quite a high bar in terms of having to accept private companies bidding for tenders on an equal basis … so it’s quite difficult to see how American companies could have more access to the NHS than they already do,” he said. “Health care and pharmaceuticals and related sectors are a very big chunk of the American economy because America spends a lot on health care. So it’s not particularly surprising that it’s top of mind for them during trade negotiations.”

Trade negotiations or not, as it is, a political battle is already raging around the NHS: The opposition Labour Party has pledged to “bring an end” to privatization and what it views as profiteering of the public health system.

Given the contentious nature of the current debate, whomever becomes the first prime minister in a post-Brexit Britain may be judged the future of the NHS.