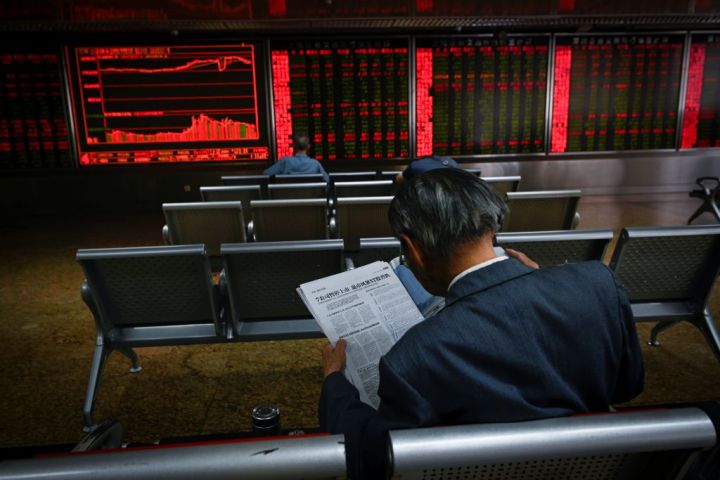 COPY
An investor reads a newspaper in front of screens showing stock market movements at a securities company in Beijing on May 14, 2019. WANG ZHAO/AFP/Getty Images

An investor reads a newspaper in front of screens showing stock market movements at a securities company in Beijing on May 14, 2019. WANG ZHAO/AFP/Getty Images
Listen Now

The Financial Times reported this past weekend that a bipartisan group of U.S. Senators, along with intelligence officials, have been meeting with American business leaders and academics to warn them of the dangers of doing business with and in China, covering subjects like intellectual property theft and forced technology transfer.

What makes this latest effort different? They’re sharing classified information to make their case. Democratic Senator Mark Warner, one of the senators involved, spoke to Kai Ryssdal about the process.

Below is an edited transcript of their conversation

Kai Ryssdal: So, here you are, the vice chair of the Senate Intelligence Committee, holding briefings with American companies. Sharing, as I understand it, classified information with them to alert them to the nature of the threat. First of all, are you sharing classified information with American companies? And, second of all, how unusual is that?

Warner: Well, I’ve convinced the intelligence community that we really aren’t doing our job unless we can also read in American businesses, American academic institutions, American venture capital funds. We’ve put together a process where firms are read in for a special classified briefing. I always do this with a Republican partner, Republican senator, so that we can show that this is not just the Trump administration, or the variety of heads of our intelligence agencies, and FBI, and Department of Homeland Security, but it’s also a bipartisan group of senators that believe this is a issue of national security; that they need to hear about why we think this is such a threat.

Ryssdal: What is the reaction from these companies? And let me just pick one, Apple, which, as you know, is enormously dependent on the Chinese market. What are CEOs like [Apple’s] Tim Cook saying to you when you say: “You know what? You need to rethink your relationship with China.”

Warner: I think, from some companies, we are hearing that willingness to rethink. We hear from a number of companies who made major investments in China. In many ways, a number of American companies almost sold their soul to try to get into the Chinese market, and make compromises they would have made nowhere else. And I think many of those companies realized: “Oh my gosh, this may have been a mistake because there’s been theft of our intellectual property.” We’ve seen from some of the startup companies a recognition of: “Oh, yeah, I wondered why that Chinese firm was willing to pay me five-to-one over what a Western firm was willing to pay for an investment.” But there are also some others that, candidly, don’t want to hear the whole story and, you know, that’s where we continue the conversation.

Ryssdal: You have seen, I’m sure, in the press or perhaps heard here on Marketplace, this phrase: the “tech Iron Curtain coming down.” With news of Huawei and Qualcomm, and everything that’s been happening, what do you make of what looks to be a separation of the global technology supply chain, and what will that mean?

Warner: I think we’ve not fully thought through the implications. I do think the idea that if you can buy a piece of hardware or software at a 30% discount, but the cost of that is really to have a vulnerable system … not only our communications systems, but all of the so-called “Internet of Things” devices that may be connected to that next-generation system, are vulnerable. I think that’s not a good deal for American or for Western companies. And my beef is not with the Chinese people, or the China as a nation. They are a great nation. My concern is with [Chinese] President Xi [Jinping] and the Communist Party in China. And I hope it will be something that we’ll keep in mind as we go down this policy front.

Ryssdal: So look, sir, you’ve been a senator for a long time, you were governor before that. But before that, you were a business person. You were a venture capitalist, that’s how you made your money. So let me talk to Mark Warner, the business person, and say, look, you sell one of anything to 1.4 billion Chinese people, you’re doing pretty well. What is the answer to this problem from a business person’s perspective? Who feel that they have to be in that market?

Warner: The answer is, if you’re selling short term into that Chinese market but the price of selling into that market means that you have to build facilities and leave some of your intellectual property there, and three years later there is a Chinese equivalent with exactly your business practices and intellectual property, I’m not sure you’ve made, long-term, a smart business deal. Because you may not only lose out on the Chinese market, but that Chinese company may then be able to take your technology and sell to the global market at large, with a level of subsidies and support from the Communist Party in China that, candidly, the American government and Western governments don’t do for our companies.