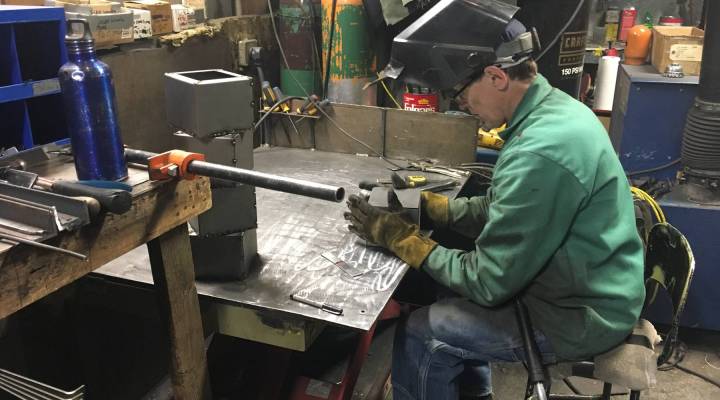 On a busy manufacturing floor  inside a cramped 85-year-old converted dairy creamery in the city of Tower in northeastern Minnesota, a handful of workers are welding together a wood-burning furnace certified by the Environmental Protection Agency as the cleanest on the market.

Just as the federal government is about to tighten its regulations on wood heaters, Lamppa Manufacturing is preparing to expand. Instead of slowing things down for Lamppa, the new rules could give the tiny company a leg up on its competition. Daryl Lamppa traces his company’s roots to his grandfather, who built wood-burning stoves for the saunas of Finnish settlers during the Depression.

“Everybody in that area, they wanted a Richard Lamppa sauna stove, because my grandpa was the head welder at the shipyards in Duluth when they were first welding down there,” Daryl Lamppa said.

Lamppa’s grandfather made the sauna stoves in his spare time. He taught Lamppa’s father, who, in turn, taught him. After a scare one winter when his own chimney caught fire, Lamppa and his dad decided to try to design a wood furnace. It’s like a wood stove, only big enough to heat an entire home.

The Lamppas reasoned that if they could build one that burned efficiently, they’d be able to eliminate the creosote — the black, sticky, highly flammable residue that can build up inside of chimneys — which caused the fire at Daryl Lamppa’s house.

“My dad was right: If you burn wood with no smoke, you get rid of the creosote and you more or less get rid of pollution. And what’s better than that?” Lamppa said.

Daryl Lamppa sits in the little office at the front of his creamery-turned-manufacturing plant in Tower, Minn.

Lamppa, 70, is a wood-burning evangelist. He started tinkering with wood furnace designs nearly 50 years ago. In the late 197os, the Lamppas began producing wood furnaces, in addition to sauna stoves. Their timing was good. After the oil embargo earlier that decade, Americans, by the millions, started heating with wood. But in those early days, wood heaters weren’t required to meet environmental regulations.

“That has left the country with a legacy of these very basic, smoky boxes,” said John Ackerly, president of the nonprofit Alliance for Green Heat. “And we’re still living with that legacy. The majority of wood stoves are old ones that are not regulated.”

Those old devices emit a lot of pollution. In Minnesota, about half of all fine particulate pollution comes from wood combustion, which can cause bronchitis, asthma and other respiratory problems. In 1989, the EPA placed emissions standards on smaller wood stoves. It wasn’t until 2015 that the EPA placed regulations on larger wood boilers and furnaces. In May 2020, those regulations are scheduled to get a lot stricter. New furnaces will have to emit 84% less particulate matter than they do now.

The new regulations will only apply to new wood-burning appliances and not to the millions of stoves, furnaces and boilers already installed in homes around the country. So far, only two companies have met that standard: Lamppa, and Missouri-based HY-C.

The industry overall has fought the new rules. Opponents argue they’re too strict, and the deadline is too soon. The Hearth, Patio and Barbecue Association sued the government over the 2020 update. John Crouch, the organization’s director of public affairs, said he agrees there needs to be a uniform federal regulation.

“But it does need to be well thought out and attainable,” Crouch said. The new regulation would make it illegal to sell a product that doesn’t meet new standards. “So, that means that one day, you can sell whatever is in your warehouse, and the next day, if you haven’t sold it, it’s a boat anchor. You can’t even give it away,” he said. “It’s a fairly draconian rule.”

The Trump administration is now considering whether to relax the standard, and has proposed allowing retailers to sell less efficient stoves for two more years. But a number of states, including Minnesota, want the new rules to go into effect.

“We really do need to improve wood-burning practices, and this is a good first step,” said Minnesota Pollution Control Agency engineer Anne Jackson. Jackson said companies have known since 2010 that the new standards were coming — and they’ve had time to prepare. Daryl Lamppa said he thinks he should be rewarded for the time and money he’s spent perfecting his furnace, which sells for about $5,700, several thousand dollars more than some of his competitors.

About 25,000 wood-burning furnaces are sold every year in the United States. Reaching even a 10% market share would have a huge impact for Lamppa — and Tower, Lamppa said. To get there, the company plans to move into a new and bigger manufacturing facility next month.

In the converted creamery, the company can make about eight to 10 furnaces a week, general manager Dale Horihan said. In the new building, Lamppa Manufacturing plans to increase that production significantly.

“Two years ago, there were three employees,” Horihan, said. “We’ve got nine right now. We really can’t hire any more because we just don’t have space.”

By the end of the year, Lamppa said he hopes to have 20 employees welding together wood-burning furnaces.