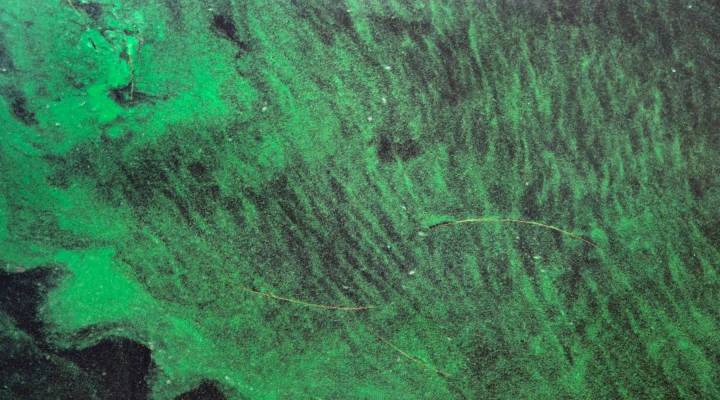 COPY
Water in the St. Lucie River is covered by a blue-green algae bloom, plaguing the river as it accumulates at the St. Lucie Lock and Dam in Port St. Lucie, Florida, on July 5, 2016. RHONA WISE/AFP/Getty Images
Marketplace Tech Blogs

Water in the St. Lucie River is covered by a blue-green algae bloom, plaguing the river as it accumulates at the St. Lucie Lock and Dam in Port St. Lucie, Florida, on July 5, 2016. RHONA WISE/AFP/Getty Images
Listen Now

It’s been called “‘American Idol’ for science geeks.” The George Barley Water Prize will award $10 million to the team that develops the most promising technology to remove excess phosphorus from freshwater lakes and streams. Phosphorus pollution, from chemical fertilizers and septic tanks, has led to the growth of toxic blue-green algae in the Florida Everglades and elsewhere.

Marketplace’s Amy Scott talked with Loren Parra, director of the George Barley Water Prize. She said the goal is to spark innovation. The following is an edited transcript of their conversation.

Loren Parra: The way that we’ve previously been looking at the issue, or how it sometimes is reported on, is attempting to remove the blue-green algae. While you can probably effectively skim off blue-green algae, you’re not really tending to the root cause of the problem, which is excess phosphorus. I kind of liken it to the algae being a symptom of the flu. You might be able to soothe a cough, but unless you actually attack the root cause of the sickness, you’re not really going to affect the overall well-being of the system.

Amy Scott: What are some of the ideas the teams have come up with so far?

Parra: We’ve had a great showing from all around the world from the beginning of this program. We had over 100 applicants from 13 different countries. Again, it just really drove home the fact that this problem is not specific to Florida or the Everglades. It’s a global issue. We’ve got a number of different technologies, a number of different approaches. One that I really love talking about, we actually have a U.S. Geological Survey agency team participating in the program. They’ve essentially decided to use a local byproduct, an iron ochre, which is really specific to the industries in West Virginia where this group is out of. They’ve decided to use that waste product as the filter to help remove phosphorus from water. They’re taking this essentially waste product and transforming it into a technology that could affect and clean the waterways.

Scott: Why do you think we need a prize to solve a big social and environmental problem like this? I mean, obviously Americans love a good competition, but why shouldn’t the companies that caused this problem be solving it?

Parra: I think part of why we’ve been so successful in garnering stakeholders is because our prize and our program. Prizes in general are just really solutions-oriented programs, and around the world there’s such a rich, rich history with the global implementation of prizes. They’ve been used in the past to solve problems that the free market simply wasn’t addressing quickly enough on its own. This infrastructure of rewards and prizes has historically helped catalyze significant accomplishments. Certainly we’re hoping to do that with the Barley Prize, but things like the Orteig Prize in 1927, which spurred Charles Lindbergh’s first transatlantic flight from New York to Paris. That reward at that time in 1927 was $25,000, which today is all of $300,000 I think, but it was that flight that led to today’s $300 billion aviation industry, which is something basically impossible to have imagined at that time. What we know is that historically, these prizes can help catalyze massive changes and huge technological breakthroughs, and we’re really hopeful that the Barley Prize can do the same.

Scott: Has the competition actually spurred those breakthroughs, new ideas to remove phosphorus, or are they ideas that were being developed prior and they’re just getting a boost from this?

Parra: I think that we collected a number of ideas that were in different stages of development, but certainly none of these were being implemented on a commercial scale yet. We’ve definitely moved the needle without a doubt on research and development. But I would go so far as to say that our third stage, which was an actual field test in Canada, really did manage to move the needle on the economics of phosphorus removal. Here in Florida, the most typical way to address the phosphorus pollution issue is through stormwater treatment areas, which are STAs. But the problem with STAs, while they’re remotely effective, they’re incredibly land intensive. With each of our teams to get as far as they’ve gotten in this competition, they were given pretty strict land constraints because what we want to be able to do is implement these types of technologies anywhere in the world, regardless of available land. That alone, the shown efficacy of being able to remove phosphorus from water and removing the massive land component necessary here in Florida, is a huge win for us.

Scott: If we don’t solve this problem soon, what are the stakes?

Parra: The stakes get higher and higher every year. We know with global warming, with sea level rise, what we’re seeing is not only more frequent algal blooms, but they’re more intense. They’re more damaging and they’re more harmful, not only to human health but ecosystem health. Certainly in Florida, what’s at stake is the drinking water supply for a third of the state. Our state here in Florida relies so heavily on tourism. So without clean waterways, without pristine beaches, we’re missing out on the No. 1 driver of the state’s economy.

The prize is sponsored by the Everglades Foundation and the Scotts Miracle-Gro Foundation. Scotts, the company, still uses phosphorus in some of its fertilizers but dropped it from lawn products several years ago. The competition is now down to five final teams. They’ll spend the next year testing and refining their technology. That $10 million grand prize will be awarded next year.

Loren Parra mentioned the rich history of prizes to solve big technological challenges. Researchers publishing in the MIT Sloan Management Review compiled some fascinating examples. As far back as 1714, the British government offered 20,000 pounds for an accurate measurement of longitude. In more recent times, prizes have been awarded to increase fuel efficiency, build a better algorithm for recommending movies on Netflix and land a robot on the moon. The authors found that in many challenges the competitors end up spending far more money collectively, and sometimes individually, than the size of the award. Entrants also tend to overestimate their chances of winning.