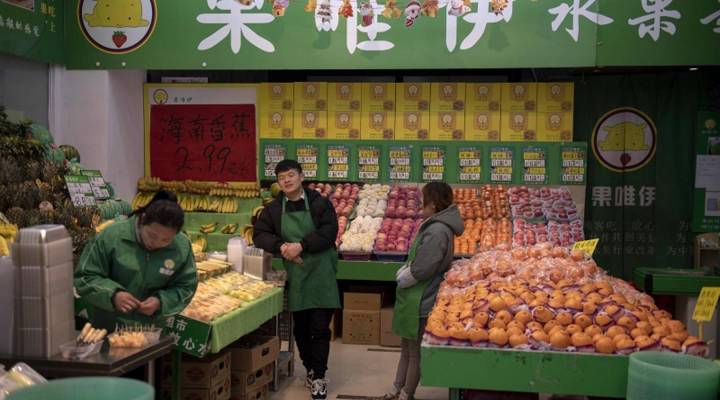 China’s economy grew 6.4% in the first quarter compared with a year earlier — faster than many economists expected.

The White House had previously argued that China’s weakening economy would give the United States an advantage in trade negotiations with the Chinese. “China wants very much to make a deal,” President Donald Trump said in March. “China has not been doing well. We’ve been doing unbelievably well.”

But even with a rebounding economy, China is highly motivated to reach an agreement with the United States, according to Nick Consonery, director of China macro research at the Rhodium Group. Government stimulus drove much of its recent economic recovery.

“The Chinese government has been easing monetary policy and stepping up fiscal support for the economy since the second quarter of last year,” said Consonery. “So it doesn’t come as a big surprise that we’re starting to see the fruits of those efforts translate into stronger economic data.”

It’s a shift from the Chinese government’s previous efforts to reduce debt and boost financial stability. Now, to boost growth, the government is encouraging lending. Corporate borrowing shot to a six-year high, according to data from China Beige Book International, which surveys thousands of Chinese companies.

“This is almost entirely a credit-driven or a credit-soaked recovery,” said Shehzad Qazi, China Beige Book’s managing director. “What you see is that anybody who wanted a loan in the first quarter got one, and that’s what’s really propelled this first-quarter recovery.”

That prompts questions as to how long the recovery will last, said Qazi, adding that China still wants to reach an agreement with the United States, to stave off longer-term economic pressures. Eswar Prasad, a trade policy professor at Cornell, agrees.

“The U.S. still has some leverage over China, because China clearly wants a deal,” he said, though he cautioned that, because the White House also wants a deal, the United States doesn’t have a huge advantage in these negotiations.

“U.S. financial markets also seem to have been boosted by the prospects of a U.S.-China trade deal,” Prasad said. “So I think it could have a negative effect on both financial markets and economic activity in both countries if a deal is not struck.”

Prasad said the question continues to be what that deal looks like and how comprehensive it might be.