Gone are the days of the crackly speakerphone piping unintelligible, disembodied voices into the conference room. The rise of video meetings has spawned tech stars like Zoom, set to go public this week with a value of about $9 billion.

Once the stuff of futuristic science fiction (see “Back to the Future 2” below), videoconferencing has become part of the everyday rhythm of businesses today, reshaping the way many people live and work.

The technology has been a game changer for Omar Zaki, a product manager at a software company with teams spread around the globe, who works full-time out of his home office in Atlanta.

“I think that it allows a certain amount of inclusion, with people who aren’t there,” he said. “Using video in addition to the audio really helps me build my personal brand so that people know who I am. They put a face with the name.”

Communicating visually can have a powerful effect on relationships, said Catalina Toma, a digital communications professor at the University of Wisconsin, Madison.

“Nonverbal cues could be successfully used for getting people’s attention and engagement, and can facilitate a feeling of closeness, liking and trust actually,” she said.

That fosters better collaboration and puts remote employees on a more even playing field with their peers in the office. Gallup polls show remote work is increasing in the U.S., with more than 40% of workers surveyed skipping the office at least part of the time.

That can have big benefits for employers, like attracting talent that could be based anywhere, and saving money on travel. For employees it can improve productivity and quality of life: no commute, no distractions, time to pick up the kids from school or even catch a wave, like non-profit consultant Sarah Schacht does.

“I spent a month in my favorite surf spot surfing four hours a day and putting in a full day of work,” she said.

Schacht is based in Seattle but she once spent a month working remotely from a Caribbean island, where she met with clients over video — quickly pulling her wet hair back into a neat bun and applying a little makeup.

“Because you’re only visible from here up, right?” she said, gesturing at her neck.

But not everyone is so camera savvy, said Carol Kinsey Goman, a corporate communication coach. She once worked with an executive who conducted an entire video meeting while looking down at his desk.

“Literally what people saw was the top of his bald head while he was reading these notes instead of actually looking at people,” she said.

Video conference etiquette can vary place to place. Most colleagues won’t mind the odd kid or pet walking into frame from time to time. But fixing and eating lunch while on camera is probably not a good idea.

Whether people present well on camera or not, Goman said there’s still no substitute for in person eye contact.

Even if you manage not to stare self-consciously at that little image of yourself on screen (who can resist?), camera position makes it tough to keep a natural gaze, it’s difficult to read the room and you’re missing out on those spontaneous connections that happen in the hallway between meetings that feed relationships and creativity.

“In a fortieth of a second, you can create a bond with someone simply by shaking their hand,” Goman said.

That’s something technology still hasn’t been able to replicate. 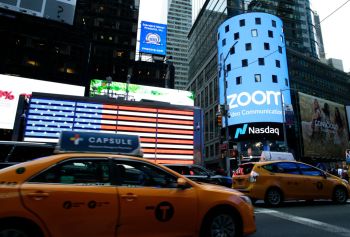