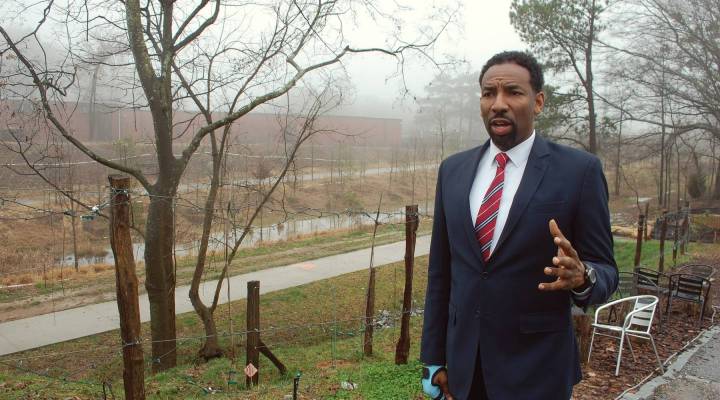 COPY
Atlanta City Council Member, Andre Dickens, who pushed for a policy known as “inclusionary zoning” in a bid to create affordable housing in some of the city’s most sought-after neighborhoods. Stephannie Stokes for Marketplace

Atlanta City Council Member, Andre Dickens, who pushed for a policy known as “inclusionary zoning” in a bid to create affordable housing in some of the city’s most sought-after neighborhoods. Stephannie Stokes for Marketplace
Listen Now

In cities around the country, some rents are rising faster than paychecks.

In Atlanta, rents have gone up by 30% in the last five years, according to the real estate site Zillow. Some of the greatest increases have been in areas surrounding a new walking trail, the Atlanta BeltLine. Real estate on the 22-mile loop has become the landlocked city’s version of beachfront property.

“You see new stuff is coming in,” said Atlanta City Council member, Andre Dickens. Old warehouses are being converted into breweries and shops as part of the new development around the BeltLine. “This area is transforming, and it’s some needed change and revitalization,” he said. But Dickens knows that revitalization also can drive up rents. That’s why he pushed for “inclusionary zoning” around the BeltLine, a policy several cities around the country have already adopted.

Atlanta’s inclusionary zoning rules requires apartment builders within half a mile of the trail to keep between 10% and 15% of their units affordable for low-income renters.

That’s the idea. But inclusionary zoning is based on the assumption that developers will keep building. And since Atlanta implemented the rule more than a year ago, only two projects have applied for and received permits to build in the zone.

Developers like Tim Schrager wonder if the policy is to blame. “Development deals, they’re very challenging. The cost of construction. The cost of land. Everything is very expensive today,” Schrager said. He said it is hard to get any project financed, especially where developers have to tell investors they’ll need to give up revenue on as many as 15% of units built.

“I don’t think that the electricians and the framers are going to start reducing the cost of their labor because of inclusionary zoning,” Schrager said. “The deal’s not going to pencil out.”

Meaning, investors won’t fund the development. The only projects that have moved forward under the rule rely on significant help — from federal subsidies or philanthropic donations.

But supporters of the policy don’t see any cause for concern. “The numbers do not support any notion that the inclusionary zoning has deterred development,” said Dan Immergluck, a professor at Georgia State University’s Urban Studies Institute.

Immergluck compared apartment construction around the BeltLine to the rest of the city. He found it to be in decline — everywhere. He said real estate worked in cycles. “I think it’s a clear mistake to read this as a failure of the particular policy design. If anything, it’s a failure of doing it soon enough to capture the building cycle.”

Debate over the impact of inclusionary zoning has become as common as the policy itself. Portland, Philadelphia and Minneapolis all have faced similar conversations.

A few blocks from the BeltLine on the city’s west side, Jeanette Sellers has opened a new business: a vegan, natural foods store.  The shop is something Sellers wanted in the neighborhood, known as the West End. She also lives here as a renter, although she isn’t sure for how long. She’s a single mother of four, and concerned about rising housing costs. “I mean, I’d love to stay in the West End. I don’t know if I could afford it,” Sellers said.

Dickens, the council member, said inclusionary zoning may not provide relief for residents like Sellers right away, but he’s confident the policy will make a difference in the long term.