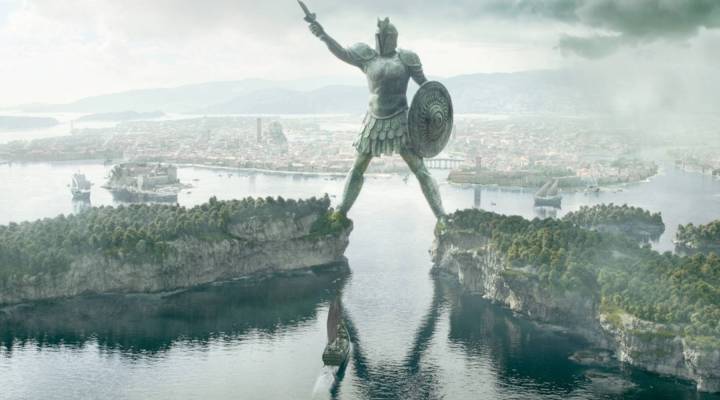 Running kingdoms and fighting wars can get expensive. When that happens in “Game of Thrones,” rulers end up turning to the Iron Bank.

The Iron Bank of Braavos (located on the fictional continent of Essos) is an incredibly powerful and wealthy institution, lending money to governments and military commanders. The bank plays a key role in the series, serving as one of the financial backers for the Iron Throne —  a chair made of swords that represents the current government in Westeros, where many of the series’ events take place.

But its alliances are dubious, shifting throughout the series. In real life, failing to pay your bank loans on time might ding your credit score, or lead to visits from a collection agency. In “Game of Thrones,” the Iron Bank will find that archrival of yours who wants to kill you and decide it’d be fun to finance them instead.

“Because they have the resources to do this, they’re guaranteeing their long-term survival, potentially at the risk of short-term liquidity,” said Zachary Feinstein, an assistant professor at Washington University in St. Louis who analyzes fictional economies on the side.

We see this in season four of the TV show, when the Lannister family — which controls the Iron Throne — is unable to pay back the money it owes. At the beginning of the TV series, the bank has lent the Iron Throne millions of Gold Dragon coins.

In retaliation, the Iron Bank helps fund Stannis Baratheon, one of the throne’s competitors. But by the the show’s seventh and latest season, Cersei Lannister, who’s currently on the throne, ends up paying its debt. That satisfies the Iron Bank and leads it to grant her a new loan, allowing her to hire more soldiers.

How the Iron Bank started

The founders of Braavos stored their treasures in an abandoned iron mine. As the city became wealthier, they began lending out their treasure.

If you want to draw real-life parallels, the Iron Bank and the region has similarities with Venice, Italy, during the emerging Renaissance era, according to Matthew McCaffrey, a lecturer in enterprise at the University of Manchester and an economist who’s studied “Game of Thrones” extensively.

“They seem to be … a hint at Renaissance Venice as a place of emerging commercial culture, a relatively wealthy area involved in early banking and financial markets,” McCaffrey said. “Which at that time, in early Renaissance Europe, was mostly unheard of in the rest of the continent.”

Feinstein said one of the key advantages the Iron Bank could have is its proximity to the Faceless Men of Braavos, a group of assassins whose members have included Arya Stark. Fan theories suggest that the two are part of the same organization.

“Having a skilled assassin next door that they can hire if they need to to eliminate threats definitely helps them survive in the long-term,” Feinstein said.

The show and the books haven’t explicitly revealed how much money the bank has in reserve, and it’s difficult to come up with precise numbers.

“Given that they are heavily financing some really significant credit risks in a world that is already extremely uncertain and very risky for them, presumably they would have millions and millions of pieces of gold tucked away,” McCaffrey said.

Feinstein, however, makes the argument that they could have nothing at all.

In season 2 of the TV show, Xaro Xhoan Daxos — a merchant in the city-state of Qarth — asks Daenerys Targaryen, the Queen of Dragons, to marry him and promises to share the fortune in his treasure vault. But at the end of the season, Daenerys discovers it’s actually empty.

“So there is the potential, if no one ever goes into the vault, that the Iron Bank has lent everything out,” Feinstein said. “The amount of wealth they have, in pure terms, in their vault, could vary drastically.”

Too big to fail?

The amount of power that the Iron Bank wields could be dangerous. Feinstein has even dubbed the bank a systemically important financial institution. In other words, “too big to fail.”

Feinstein said one of the risks that the Iron Bank faces is the possibility of a bank run. “In which case, all the depositors of the bank ask for their money back, but of course it’s been lent out. That would cause the bank to default on everyone’s deposits, which will destroy the bank,” he said.

The effects of a collapse would ripple across continents.

“If the Iron Bank were to default, a lot of kingdoms, a lot of nobles and merchant people of wealth would potentially have lost millions of Gold Dragons that they were operating under the assumption that they had, which would cause massive unrest,” Feinstein said.

Mark Wright, senior vice president and research director at the Minneapolis Fed, said he’d be very worried about the Iron Bank’s lending practices. “I certainly want to take a closer look at the assets they have in their vault, to make sure that they are able to withstand an adverse outcome of the war,” Wright said.

If the Iron Bank is too big to fail, could it be bailed out? This is where the politics of the whole situation get tricky. Westeros, which is where the Iron Throne is located and has a stake in the bank’s success, could not bail it out.

“The problem would be that this is a bank operating in Braavos. This would be comparable to saying, ‘Well, would the U.S. bail out a Japanese bank?’” Feinstein said.

And it’d pose a problem for Braavos, an independent city-state. “As a parallel to 2008, this would be akin to asking New York City to shoulder the entire burden of bailing out the financial system,” he said. “It is an extremely wealthy city, but it does not have the resources of a massive nation.”

Secondly, the U.S. and modern economies use a fiat currency, Feinstein noted. That means that the government is able to determine its value, as opposed to physical currencies that are composed of something valuable (the Gold Dragons in “Game of Thrones” are made of gold).

“If we need to bail someone out, we can print more dollars and use that to bail out the banks,” Feinstein said. But to produce more Gold Dragons, you’d have to mine actual gold.

No matter who ends up surviving at the end of the series, or even if the Iron Bank ends up betting correctly on the victor, McCaffrey said one of the important themes running through the series is the consequences of war.

“War is always a terrible thing for the economy, and for society, it just destroys wealth. It impoverishes everyone,” McCaffrey added. He pointed out that in the show’s universe, economic conditions have stagnated.

“You have these problems with wealth accumulation, because there isn’t really a particularly well-developed commercial system. Technologically, things have been pretty much the same for centuries and centuries,” he said. “So there hasn’t really been any developments. Nobody’s really innovated or come up with anything particularly new in the economy.”