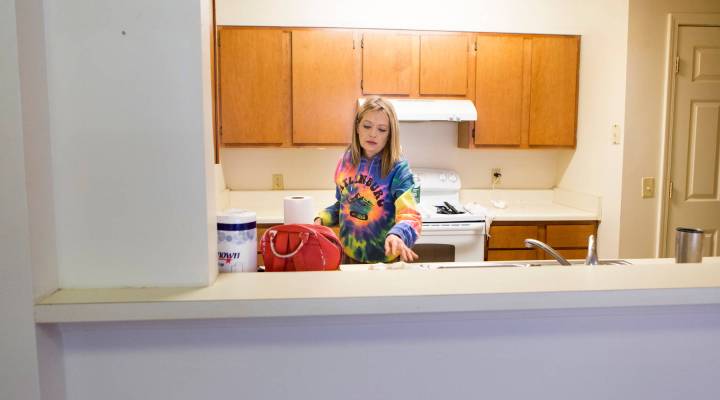 Mitzi Bowen, 44, of Wise, Virginia, cleans up after a resident moved out of the Commonwealth Apartments on Dec. 7, 2018. Bowen said she became addicted to opioids after her dentist prescribed Lortabs for tooth pain. "One day I woke up and I couldn't feel good without the pills," she said. Julia Rendleman/Marketplace
The Uncertain Hour

Mitzi Bowen, 44, of Wise, Virginia, cleans up after a resident moved out of the Commonwealth Apartments on Dec. 7, 2018. Bowen said she became addicted to opioids after her dentist prescribed Lortabs for tooth pain. "One day I woke up and I couldn't feel good without the pills," she said. Julia Rendleman/Marketplace

If you spend time in Wise County in the mountains of Virginia, you’ll see folks doing the kind of odd jobs you’d find in any rural community.

People are out painting lines on the little league field, fixing the town pool or helping out at the animal shelter.

But they’re not paid employees or volunteers. They’re felons, working off their charges.

It’s part of a new program called Wise Works, in which some people convicted of nonviolent felonies, usually for drug crimes, are sentenced to community service instead of jail. Since the program started a year and a half ago, local government and charities have saved about $200,000 in labor costs, according to program director Brian Caldwell.

The number of inmates in the regional jail has more than doubled in the past 14 years, and county spending on it has tripled in the past decade, even as the county’s population has declined, according to jail and county records.

When Slemp was running for office in 2015, knocking on doors, constituents told him jail wasn’t solving the drug problem.

“Almost every single person said one of two things,” he said. “You got to do something about those bad doctors, and I can’t believe that they locked up Uncle Johnny. Uncle Johnny was a good guy. He needed help, not jail.”

Wise Works is based on a similar program one county over. Instead of jail time, participants plead guilty to felonies and are sentenced to hundreds, sometimes more than 2,000, hours of community service. Lots of people work full time and raise kids on top of that.

But for people like Jessie Shuler, 29, it beats jail. Shuler became addicted to painkillers, mostly OxyContin, after high school. She finally left Wise in her mid-20s and got into treatment.

When she applied for a passport recently, she found out there was a warrant out for her arrest. Back when she was in the throes of addiction, Shuler would write and cash checks in her father’s name. Now she was wanted for check fraud, grand larceny and prescription fraud.

Shuler immediately returned to Wise County, found a lawyer and turned herself in. Her son was just 8 months old.

Jessie Shuler, seen her at her Wise Works job, answering phones at a local library.

“I was a wreck the whole time … I had never been in trouble,” Shuler said. “And I’m sitting here thinking, am I going to miss his first steps?”

In the end, she didn’t miss her son’s first steps. She ended up taking plea deal and joined Wise Works. Instead of jail, Shuler was sentenced to 1,440 hours of work without pay.

When we talked with Shuler she was answering phones at the community college library. It took her nine months of full-time work to complete her sentence.

Wise Works doesn’t work for everyone. Fifty percent of people graduate. The rest are removed for violations and end up serving jail time anyway. Right now, there are just 25 participants. Collectively, they’ve avoided thousands of days in jail. And the county saves costs on incarceration.

For Shuler, the program is the difference between jail and going home at night to her son.

“You hear stories of drugs being in the jail or, you know, you get right back up with people who are not ready to change,” she said. “They’ll just come, do their time, go back and do the same thing. And I could be right there going the opposite direction.”

Johnny Deel, 29, of Lee County, plugs in Christmas lights Friday, December 7, 2018, in Big Stone Gap, Virginia. Deel was busted for distributing marijuana and instead of serving time in jail, he participates in Wise Works, working for the Big Stone Gap Department of Parks and Recreation. The program has allowed Deel to stay at home, where he lives with his wife and infant daughter.

To learn more about how Wise County is fighting the opioid crisis, listen to The Uncertain Hour wherever you get your podcasts.

This story has been updated on April 12