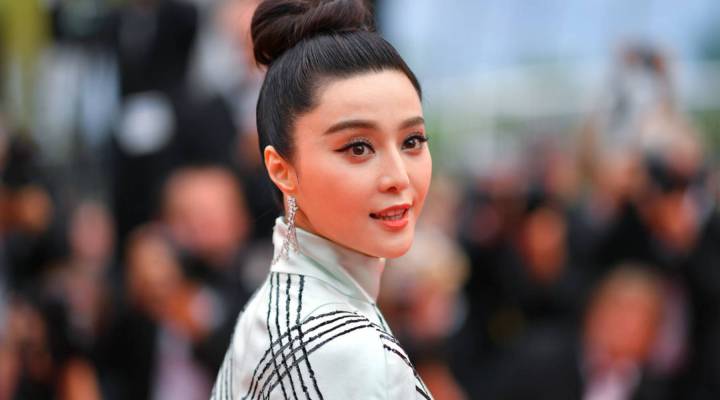 COPY
Chinese actress Fan Bingbing arrives on for the screening of “L'Amant Double” at the Cannes Film Festival in southern France in 2017. LOIC VENANCE/AFP/Getty Images

Chinese actress Fan Bingbing arrives on for the screening of “L'Amant Double” at the Cannes Film Festival in southern France in 2017. LOIC VENANCE/AFP/Getty Images
Listen Now

Chinese actress Fan Bingbing is one of the world’s biggest movie stars. She has more than 60 million followers on Chinese social media. So it was a scandal last year when she disappeared from the public eye for months.

Marketplace’s Kimberly Adams spoke to reporter May Jeong, who wrote about Fan’s disappearance for Vanity Fair and what it reveals about China’s economy. The following is an edited transcript of their conversation.

Kimberly Adams: So what happened to her last year?

May Jeong: One day she just dropped off the face of the earth. She reappears with a very obsequious post wherein she apologizes for her mishandling of events. And then after that the world learns that she’s actually been taken in for tax fraud. And later we learn that she was actually under house arrest for three or so months. During these three months, she didn’t have access to her phone. There was always a minder with her even when she was taking showers.

Adams: In your piece in Vanity Fair, you talk a lot about how this is happening as the Chinese economy is slowing down. But what does one person, Fan Bingbing in particular, what does she have to do with that?

Jeong: The double-digit growth that China has been seeing for a long time, with that slowing down, there’s been a great need for the Xi Jinping government, the current regime, to figure out alternate sources of income, and realizing this coincided with this weird little scandal in the Chinese film industry. And as the tax authorities began looking into it, they realized, “Wow! This is actually — there’s incredible wealth here that can be collected.”

Adams: So what made Fan, of all the wealthy people in China, the ideal target for this?

Jeong: A lot of the reasons as to why people suspect she, in particular, is targeted is that the government knew that she would actually comply with their wishes, which is not something that comes as a guarantee necessarily with other members of the Chinese show business.

Adams: So it sounds like a lot of this was to send a message. Was it received?

Jeong: Yeah, I would say so. When I was there, people were maniacally sort of going back through their past papers, you know, saying, “I got to go see my accountant,” “I’ve been called in to tea.” That’s the euphemism that’s used to go see the tax authorities. And they were really trying their best to get their ducks in a row in a way that they tell me they hadn’t really experienced before. People sort of talked, made reference to the Cultural Revolution to say that, you know, this is the first time since the Cultural Revolution that there’s been so much government control over what we do here.