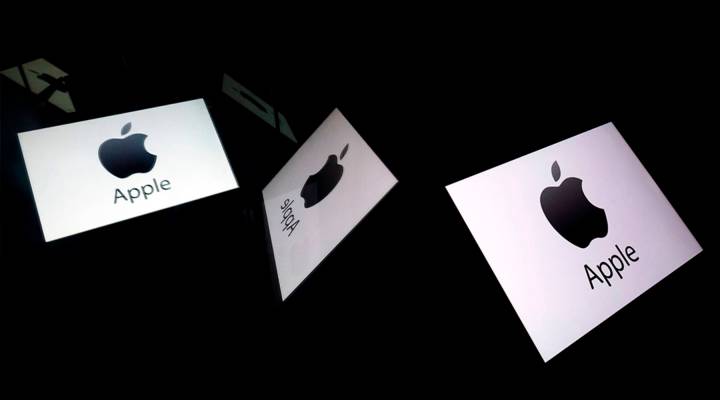 This illustration picture shows the Apple logo displayed on a tablet in Paris on February 18, 2019. Lionel Bonaventure/AFP/Getty Images
Listen Now

On Monday, Apple is holding a special event tagged with the line “It’s showtime!” That’s led to wide speculation the company will finally reveal its streaming service. Recode reports, seemingly based largely on its own intel, that the announcement will mainly involve packaging and selling other companies’ content. So maybe not the Apple-takes-on-Netflix battle some were hoping for. Is Monday’s announcement going to be less Showtime, more Crackle? Marketplace’s Jed Kim talked with Brian Wieser, who leads business intelligence for advertising firm GroupM. He says if you were paying attention to Apple’s reported budget for original content, around $1 billion, you could’ve guessed its latest play isn’t becoming a giant entertainment studio.  The following is an edited transcript of their conversation.

Brian Wieser: Believe it or not, $1 billion doesn’t get you very far. You can make a few series that are really high production value at that level. You can license a lot of content, but you may not be a huge source of viewing at that level, given the amount that other companies are presently spending.

Jed Kim: Apple is very successful at selling phones and computers. Can’t they not do this?

Wieser: Certainly Amazon has demonstrated that spending on video content can have a lot of ancillary benefits for the company providing that content. To the extent that, if you’re Apple, you’ve decided that you can sell more hardware if you have this content, and who knows if you have to have the hardware to get the content, but if they think that somehow it will help them with the rest of their businesses, then that could make a lot of sense. I think it would be interesting to see if there’s any attempt to tie the content to the hardware or if, in fact, the content could be available to anyone and everyone.

Kim: Could advertising fit in with Apple’s potential model, whatever that ends up being?

Wieser: Apple is not as allergic to advertising as, say, Netflix is. It’s probably the case that advertising can be a part of it. I think how much will depend in large part on the scale. If it’s a big business, then, obviously, there will be more of an opportunity for advertising. But they may also say that, for the kind of content they have, for the overall offering, they think the consumers don’t want to have exposure to ads and therefore they won’t start out as an ad-supported service. That’s also a very realistic approach.

Kim: Apple really changed the way we listen to music with iTunes. But TV today isn’t like the Wild West that MP3s were back in the day. Is there a need for this service?

Wieser: There’s plenty of opportunity to offer new video programming. Will the form in which it’s delivered change? They may have a different idea about what TV and video entertainment would be. It’s up to someone to invent what that is.

Also expected at Monday’s event is the unveiling of the new Apple News subscription service. Pay a monthly fee and then read as much news as you want from a whole bunch of outlets. That’s what Apple wants to give, in what’s being called the “Netflix for news.” The problem is, Apple could keep half of the revenue. That’s what the Wall Street Journal reported earlier this year. Apple apparently doesn’t want to share customer data with the news companies in its service. That’s a big problem for news media outlets that are trying to build their customer databases. The New York Times and the Washington Post aren’t part of it. The Wall Street Journal is.

Recode has reported on some good reasons for many publishers to join. They could get a lot more subscribers, and Apple’s going to promote the heck out of its news service.

And our own Molly Wood pointed this one out: a piece from The Verge breaks down where Apple is making money these days. Services brought in nearly $11 billion last quarter. Need a list of all the ways Apple has wormed its way into your life? Apple Music, the App Store, iCloud — it goes on.