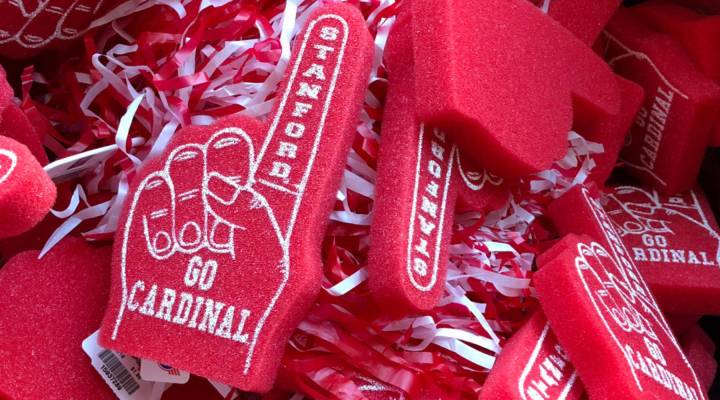 COPY
Parents allegedly spent up to $6.5 million dollars in bribes to help get their kids into top schools. Justin Sullivan/Getty Images

Parents allegedly spent up to $6.5 million dollars in bribes to help get their kids into top schools. Justin Sullivan/Getty Images
Listen Now

Federal prosecutors indicted 50 people yesterday for scamming the college admissions system. To help get their kids into top schools like Stanford and Yale, parents allegedly spent up to $6.5 million in bribes to coaches, professional test-takers and university administrators.

The man behind the scheme, Rick Singer, has pleaded guilty, as has Stanford’s sailing coach. The parents allegedly involved include the co-chair of a major law firm, senior executives from a wide variety of industries and the chief executive of Hercules Capital (the shares of which closed down 9 percent after the news broke).

Marketplace’s Sabri Ben-Achour spoke about the scandal with Jessica Calarco, assistant professor of sociology at Indiana University, and discussed the existing — legal — ways in which wealthy families can manipulate the school admissions system. The following is an edited transcript of their conversation.

Sabri Ben-Achour: Behind this entire scandal, the reason these people allegedly defrauded schools and gave and took bribes is clearly because they believe that getting into elite schools is worth it. So I want to ask you, in our society, how important to an individual’s success in life is going to an elite school?

Jessica Calarco: Certainly research tells us that going to an elite school is good for kids’ life chances, but these are kids of extremely privileged, extremely wealthy parents, and arguably they would do well even if they didn’t go to these elite schools. And essentially what I think might be going on here, and what research backs up, is this idea that privileged parents are defining their worth as parents by the kinds of schools that their kids get into, and go to, and how well they do for themselves in life. There’s something else going on, as well. These privileged parents, there’s research on sort of emotional safeguarding where they feel like they have to protect their kids’ self-esteem. We saw in some of these cases that came out through the filings that a lot of these parents wanted to have their children never know that they didn’t actually get the S.A.T. scores that they thought they got.

Ben-Achour: Is our society so status-driven, so name recognition-driven, that getting into, say, a super elite school is that much better for someone than getting into just, say, a good school?

Calarco: If you’re looking at students who got into those elite schools and ultimately went to other state schools instead, they do just as well as if they’d gone to those kinds of elite schools. So certainly there’s something about being that type of student who can get into an elite school, regardless of whether you actually go, that matters. But at the same time, there’s also that social status that goes along with that and not just the monetary value of a particular degree.

Ben-Achour: The U.S. attorney presenting these allegations said, you know, we’re not talking about donating a building, we’re talking about fraud. But he brought up there, implicitly, the fact that there is a socially acceptable way to buy your child’s way into an elite school. You just pay for a building, pay for a program. How much better is it that you can literally buy your way into elite schools, just in a different way?

Calarco: The whole system isn’t fair, whether it’s buying your way into an elite school, or having enough money to live in the kind of neighborhood where you have access to high-quality schools that have more than enough resources to go around and highly paid teachers, and the preschools that you go to, the colleges that you go to. There are plenty of ways for parents to legally game the system, and they’re all unfair. But they exist, and that’s certainly how the privileged people in our society are able to maintain their privilege.