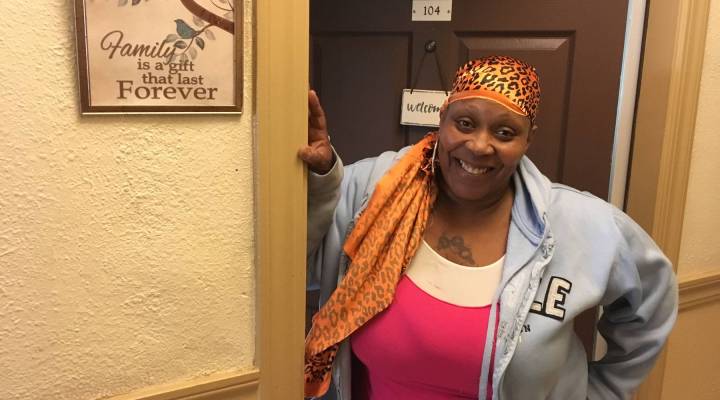 When an apartment building sells in gentrifying parts of Oakland, California, tenants often brace themselves for the worst. Rent hikes, disruptive renovations and evictions can follow. But when one building recently changed hands, city officials and housing activists celebrated.

Kensington Gardens, a 41-unit building in the working-class, immigrant neighborhood of San Antonio, was sold last November. “I was feeling somebody was going to get it and they were going to raise the rent,” said Ameria Lipscomb, who lives in a first-floor studio in Kensington. Tenants there generally pay below-market rents.

When the building changed hands, Lipscomb expected a rent hike and for many of her neighbors — retirees on fixed incomes, janitors, childcare workers, a couple of families with children— to be pushed out. But neither outcome came to pass. Why? The new owner is the East Bay Asian Local Development Corporation, a nonprofit affordable housing developer.

“I am so happy that they bought this building. I don’t know what I would have done if the rent went up,” Lipscomb said. Facing sky-high real estate prices, EBALDC’s current strategy is, rather than building affordable units, to buy them and hold rents steady. The idea is to keep people from getting displaced.

“You just cannot build your way out of this crisis,” said Charise Fong, the nonprofit’s chief operating officer. The challenge, however, is finding enough capital to buy in Oakland’s overheated housing market. “You’re running against private investors with all-cash and they often will beat you out,” Fong said.

EBALDC got a low-interest loan of $5.2 million from Kaiser Permanente, the health care company with headquarters in downtown Oakland, to acquire Lipscomb’s building. Kaiser’s chief executive, Bernard Tyson, announced the loan at a city hall press conference in January. It was about half the money needed to buy Ameria Lipscomb’s building.

Kaiser also promised to partner with local social service agencies to provide health care and housing for 500 homeless people in Oakland, though it didn’t give details on exactly how it plans to provide that care. Yesterday, Kaiser announced plans to spend $3 million in 15 communities nationwide to combat chronic homelessness.

What’s in this for Kaiser? Sure, it’s good public relations. But according to Robert Friant of the Corporation for Supportive Housing, health care companies are recognizing that for people to be healthy, they need homes. “Not only does the health of the patient improve, the outcomes are better, but we all benefit because the cost of health care goes down,” Friant said.

Kaiser is investing $200 million in low-interest loans for affordable housing nationwide. This may be part of a growing national trend of health maintenance organizations investing in housing to improve community health. In Phoenix, United Healthcare lent money to a community development corporation, Chicanos Por La Causa, to purchase apartment complexes for Medicaid recipients. In Chicago, the University of Illinois Hospital helps to find permanent housing for homeless people who regularly present at its emergency department.

In order to maintain their tax status with the IRS, non-profit hospitals are required by law to give back to the communities they serve. Traditionally, this takes the form of charity care, according to Anthony Galace of the Greenlining Institute, a policy group that promotes economic justice.

But with more people covered by the Affordable Care Act, nonprofit hospitals are fulfilling their community benefit requirements by getting into housing development, clinic-building and workforce training. Housing individual homeless people and supporting social services can count toward IRS requirements, but loans do not, Galace said.

Oakland estimates that by between 2020 and 2024, to meet the growing demand for housing, the city will need to build 17,000 additional housing units, and protect 17,000 existing units from rent hikes and evictions.

For Ameria Lipscomb, there’s a clear connection between health and home. She’s a cancer survivor. And when she got sick, she lost her job as a cook and found herself on the street. She’s still not working, and her rent is subsidized.

“I love my honeycomb hideout,” she said, as she proudly gave a tour of her studio. “I come into my apartment and I breathe a sigh of relief because I lived one more day, and I have a roof over my head one more day.”

Correction (March 13, 2019): Previous versions of this web and audio story included an incorrect professional honorific for Bernard Tyson. They have been corrected.