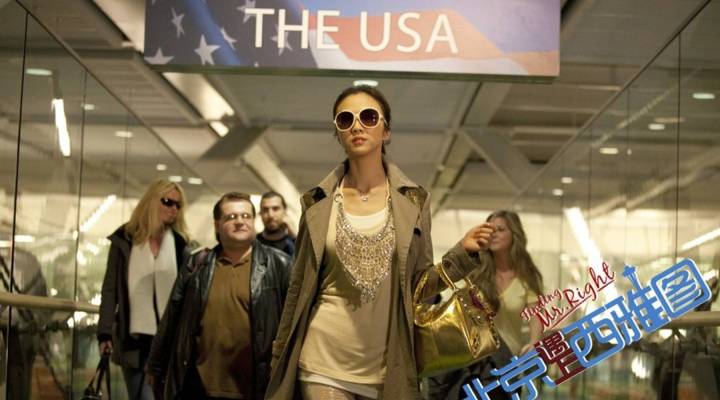 COPY
The 2013 movie "Finding Mr Right" is a romantic comedy focused on Wen Jiajia, an unmarried pregnant woman from Beijing who flees to Seattle to give birth. It raised awareness of the trend of Chinese women having American babies. Courtesy of Mtime

The 2013 movie "Finding Mr Right" is a romantic comedy focused on Wen Jiajia, an unmarried pregnant woman from Beijing who flees to Seattle to give birth. It raised awareness of the trend of Chinese women having American babies. Courtesy of Mtime
Listen Now

As part of a series on birthright citizenship, Marketplace’s China correspondent Jennifer Pak explores why Chinese parents come to America to give birth. You can read an overview of the journey parents take, and learn more about how they make the decision to have a child in the U.S., and the medical care they receive on arrival.

Thousands of parents-to-be travel from China to the U.S. every year to give birth on U.S. soil so that their children are born American citizens, according to experts who study so-called “birth tourism”. Many of those parents arrange the trip through agencies that operate in China and in the U.S.

The operators of three of those agencies were arrested in California in late January. They are among the 19 people federal prosecutors have charged with visa fraud, defrauding landlords and other crimes stemming from the birth tourism businesses.

But many agencies in China say they do business legally. And their marketing materials make giving birth in the U.S. sound like a vacation.

In a promotional video for Shanghai’s Meijiabei agency, pregnant moms and their husbands cook juicy steaks and sip red wine in a Los Angeles home, where the kitchen alone is bigger than a lot of Shanghai apartments.

Their answers are edited for grammar, style and space.

How did you get into the business?

Wang: It started in 2009. I knew the U.S. well because I used to work in the luxury goods trade and I own property in America. My classmates and friends who were giving birth in the U.S. asked me to help find translators to accompany them to the doctor’s office and find professional Chinese maternity matrons.*

(Marketplace note: These are caregivers who look after and cook for new mothers after childbirth in a traditional practice called “sitting the month.” See below.)

Chao: I saw there was a demand in the market (in 2017) and an American friend asked me to go into the business in mainland China. This friend had previously helped clients from Taiwan give birth in the U.S.

Who are your clients?

Chao: Most of my clients are professionals or work for big companies like Tencent, where I used to work. Typically, my clients are residents in big Chinese cities with an annual household income of at least 300,000 yuan ($45,000).

How much do you charge for your services?

What services do your agencies offer for that price?

Wang: We are a one-stop service provider, from visa applications to accommodation in the U.S. We also arrange doctors, hospitals, and provide maternity care services according to a Chinese tradition called “sitting the month.” The practice has a long history in China. After a woman gives birth, her body is vulnerable and needs to be shielded from the cold and wind. She is advised to stick to a strict diet to recover [with the help of a professional caregiver or “maternity matron”]. The new mother needs to eat special foods, such as brown sugar water or pig liver fried with sesame oil, and these items are specially prepared by our Chinese “maternity matrons”. There’s a belief that if new mothers don’t respect these rules, they will experience health problems later.

Chao: We will advise clients on how to do the visa application and what to expect during the face-to-face interview with U.S. immigration officials. After clients arrive in the U.S., we provide transportation from the airport to their accommodation (sometimes referred to as “maternity clinics”), meals, doctor and hospital recommendations, and organize shopping trips and up to two group tours a week. We also assist families with the proper paperwork to help their American babies return to China with their parents.

It isn’t easy for Chinese nationals to apply for a visa to the U.S., and people are not that familiar with the U.S., so our full-service package is attractive for our clients.

Why do your clients want to give birth in the U.S.?

Wang: For my generation, we grew up with the NBA, Michael Jackson and Hollywood movies. I think the U.S. is a great country with a good fusion of races. My wife also gave birth in the U.S. a few years ago, and we’re raising our daughter in Shanghai. I think the U.S. has good higher education. But the basic education in China is also good, so we prefer to keep our child in China until junior or senior high school and then she can choose where to go for university. Most Chinese parents would give everything for their children’s education.

So the main reasons my clients want to have an American baby are:

Do your clients choose to give birth in countries other than the U.S.?

Wang: Yes. Eighty percent of my clients chose to give birth to babies in America (and about 80 percent of those happen in L.A.), while the rest of them go to Canada.

Do your clients tell visa officers and customs officers their real intention?

Wang: Yes. We will declare our client’s true intention [to have a baby in the U.S.] and provide financial evidence that our clients have enough assets to sustain their stay in the U.S. and enough incentives in China that they will return.

Chao: Yes. We advise our clients to tell the truth about the purpose of their visit.

(Marketplace note: A U.S. consulate spokesperson in Shanghai said in a statement to Marketplace that travel to America for medical purposes – such as giving birth – “does not in and of itself make an applicant ineligible for a tourist visa.”)

How big is your business?

Wang: The market was very small at first, but from 2013 onward it experienced an explosive growth, for three reasons: Hong Kong banned mainland Chinese mothers from giving birth there (so families were looking for an alternative); it became easier for Chinese nationals to get U.S. visas after the U.S. and China began reciprocally offering 10-year tourist visas in late 2014; and films like Finding Mr Right popularized this idea of having American babies.

(Marketplace note: The movie is a romantic comedy where the heroine is single and pregnant, from Beijing, and fled to the U.S. to give birth. As an unmarried mother, she would be penalized thousands of dollars in China. In the movie, she could bypass this fine by giving birth in the U.S. and returning with an American baby, which is a status symbol.)

There are about 20 big agencies helping mothers give birth in the U.S., compared to 10 from six years ago. My agency helps 600 to 1,000 pregnant mothers to the U.S. every year. We own more than 15 properties that can be rented out to clients during their stay, in cities like L.A. and San Francisco. We have 40 employees in China and 30 employees in the U.S., including drivers, cooks and maternity caregivers.

I do not see the number of pregnant Chinese women to the U.S. rising much higher in the future because there are limited hospitals and doctors in the U.S.

Chao: My company is small, with only a couple of employees in China. As more people become wealthy in China, I think the demand for our services will start to diminish. They will find their own accommodation through Airbnb and apply for their own visas. I have a new business plan to introduce Chinese patients to doctors from around the world, not just obstetricians in the U.S., but also specialists in other areas.

President Donald Trump says birthright citizenship is costing the U.S. billions of dollars and wants to change the policy. Are you concerned about your business?

Wang: This is not the first time someone in the U.S. has made this proposal. We don’t believe the policy can be changed that easily, but America might get more strict about its visas. Our biggest challenge now is the uncertainty in government policy. If it goes the way President Trump wants, it will destroy our industry. And it’s unlikely we can transfer the business model to another country, because Canada is a less attractive destination than the U.S.

Chao: I think Trump is right in his opposition. Chinese people don’t want to give birth to children in China and do it abroad instead. The Chinese government should seriously think about why this is happening. Trump’s comments have caused some panic in the market. No other country can replace the U.S. if the policy is changed. Canada will be the only option left.