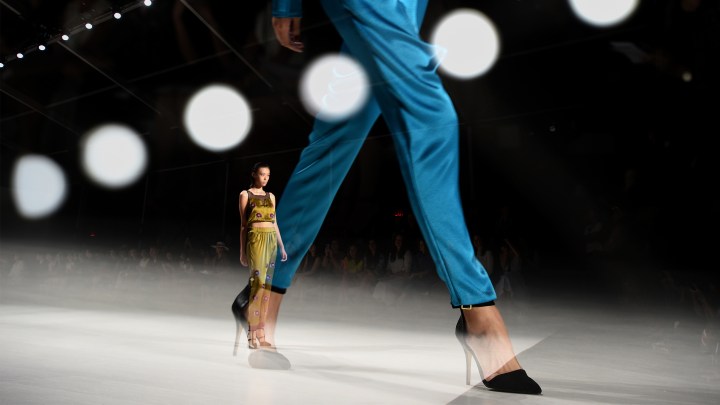 New York Fashion Week ended with a bang on Wednesday when 50-year-old Christy Turlington closed Marc Jacobs in a black feathered gown, a matching hairpiece, and leather combat boots. It was the veteran supermodel’s first catwalk appearance in over 20 years.

In a sea of young faces (many of whom had not yet been born when Turlington left the runway in 1994) the model’s cameo might seem progressive; a signal of change for an industry that usually prioritizes youth.

But Turlington isn’t an outsider vying for representation. She’s considered one of the “Big Five” supermodels of the ’90s and she represents the pinnacle of the fashion industry’s old guard.

So what was the message of Jacobs’ closing act?

Nostalgia for the designer’s own heyday, amid rumors of business troubles. Last year the New York Times reported that Marc Jacobs has been losing around $61 million annually, with flat revenues, for the past few years.

But also another, bigger nostalgia — one reflected in the collections of heavyweights Tom Ford and Ralph Lauren who leaned into familiarity and resurrected silhouettes from decades earlier.

The nostalgia is for a simpler time in fashion, before fast fashion and social media influencers irrevocably changed the industry and left designers like Jacobs “taking up the rear.”

A lot of these changes are happening in the front row.

Back in the day, the coveted seats went either to industry professionals, like editors and stylists, or to celebrities. But ten years ago, fashion influencers appeared on the scene and started to shake up front row real estate.

“Fashion week has always existed for people who already enjoy a level of influence in the industry,” explained Rebecca Jennings, a reporter who’s covered NYFW for years and wrote about its decline for Vox last week. “The shift that occurred a decade or so ago was brought on because social media and personal fashion blogging democratized the barrier of entry into who, actually, has that influence.”

Now, household names like Kim Kardashian and Cardi B sit next to people with large Instagram followings who are being paid to wear the designer’s clothes, attend their shows, and share it on social media.

Both types of guests are valuable PR: the celebrity’s presence will generate buzz about the designer in the media while the influencer’s posts about the designer will reach their fans directly. “To a brand, it’s an opportunity to target consumers the brand wouldn’t reach on its own,” said Alexandra Mondalek, a reporter who’s covered fashion and business for Racked, GARAGE and Money magazine.

Designers typically outsource their seating charts to PR companies whose job it is to coordinate invites in order to maximize press and social media coverage of the show. This is what Mondalek calls “stacking” the front row.

After seats are assigned, it’s time to dress the front row.

Because designers will pay influencers to show up their clothes, they have a lot of control over how the front row looks as a whole. And, said Mondalek, it’s not uncommon for designers to dress guests in outfits that will complement those of guests that will sit next to them.

Another change to hit fashion week in recent years is the adoption of the “see-now, buy-now” model.

Traditionally, designers would show collections six months ahead of the clothes reaching stores. February fashion weeks were for autumn/winter clothes; September fashion weeks were for spring/summer clothes. It was based on a retail calendar where store buyers attended fashion shows, decided what to buy, and placed their orders — and only then would designers make the clothes to fill those orders. Global supply chains meant that the process of sourcing, producing, and shipping the clothes took months.

But that model has been increasingly threatened by the rise of fast fashion brands like Zara and Fashion Nova that can take clothes from design to production to shelf in a matter of weeks as opposed to months.

That also means that a fast fashion brand might see a Marc Jacobs jacket on the runway in February, design their own cheap version, and have it on the racks for consumers to purchase by March — while Marc Jacobs won’t be selling the jacket until the fall.

“Shoppers who aren’t concerned with having the authentic jacket are going to buy the knockoff because it’s out faster and it meets their price point,” explained Mondalek.

“Trends come and go much, much quicker thanks to fast fashion brands continuing to exploit labor and the earth to make disposable clothing at an even more rapid pace,” Jennings said. “For the traditional fashion calendar, on which Fashion Week is based, this means that by the time clothes hit stores they already feel played out.”

So some designers are trying to adapt — like Ralph Lauren, an early adopter of the see-now, buy-now model. He showed his spring/summer collection last week and nearly everything was available for purchase immediately afterwards.

One advantage to the see-now, buy-now model for designers is that they can immediately monetize the buzz generated by runway shows. “There’s a desire to capitalize on the marketing efforts that go into producing a show and the social media engagement that happens while it’s happening,” Mondalek said. “Brands want to turn those eyeballs and those clicks into purchases.”

But it’s an imperfect system and some designers are caught in the fray. After testing the see-now, buy-now model in 2016, Tom Ford decided to switch back to the traditional calendar, citing inconsistencies between store shipping schedules and fashion show schedules. Fall merchandise ships to stores in August, but fashion week doesn’t happen until September — and because designers can’t put clothes on the runway that have already been in stores, they’re forced to hold the clothes until after the show. “We lost a month of selling. We had merchandise sitting in stockrooms all over the world,” Ford told Women’s Wear Daily.

These challenges are reflected in a feeling that fashion week is losing relevance for consumers.

“Last September’s NYFW was my first time not attending any shows and honestly, I don’t really miss it,” Jennings said. “Our readers don’t really care about it because it has no bearing on their lives, so why should I as a reporter?”

Click the audio player above to hear a conversation between Rebecca Jennings and Marketplace’s Kimberly Adams, produced by Bennett Purser.