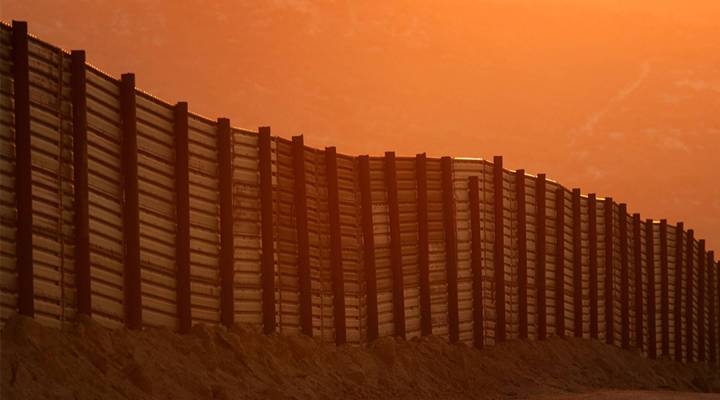 More than 600,000 Americans are growing up in Mexico. They are the American-born children of Mexican nationals, part of mixed-status families that have had to make difficult decisions as immigration policies in the United States changed. Their parents chose or were forced to return to Mexico, taking their children, some of whom didn’t speak Spanish, with them. Brooke Jarvis, contributing writer for The California Sunday Magazine, profiled some of these children in her piece “The Deported Americans” (Spanish: “Los Americanos Deportados.”)

The following is an edited transcript of her interview with Marketplace host Kai Ryssdal.

Kai Ryssdal: Do me a favor, would you, and let’s start with Ashley Mantilla, one of the students you talked to. Tell me about her.

Fifteen-year-old Ashley Mantilla is one of the estimated 600,000 American children attending school in Mexico.

Brooke Jarvis: So Ashley is a girl who was born and grew up in South Carolina near Greenville. And when she was about 9 years old, the state of South Carolina passed what was then called a “show me your papers” law, what was referred to that way, that basically turned routine traffic stops into immigration checkpoints. And Ashley’s parents saw the writing on the wall. They also had been interested in returning to Mexico, where they had been from, but it had never felt like a real possibility to Ashley or her siblings, but Ashley in particular had refused to learn Spanish when her mother had tried to teach her because she said, you know, “I’m American, why am I going to need that?”

Ryssdal: So she lands in Mexico. They go out bus rides away from Mexico City, you say, to where the parents are from, and she’s plunked down in the Mexican school system not speaking Spanish.

Jarvis: Right, which was a really hard transition for anybody. Ashley in particular found it hard because she was used to being so successful in school and that was a big part of her identity. And then all of a sudden, the teacher sees her as stupid and as not trying hard enough. And that’s something that from educational researchers I spoke to is fairly common. Teachers may not know that they don’t speak Spanish because they have conversational Spanish, but they don’t read it. They don’t write it. They’re not ready to learn in it. And so it’s very common that researchers will go to schools and say, “Do you have any American students here?” And schools often will say, “Actually we don’t, we don’t have any students like that.” And then when they look harder, they may realize they have dozens of students like that.

Ryssdal: And in fact, there are, as you say in this piece, best guesses are there are 600,000 American-born, which is to say American citizen children, in the Mexican school system.

Jarvis: Mmm hmm. And that’s an estimate. I mean, there are children who are missed because they don’t end up re-enrolled in school because of the paperwork and documentation difficulties. But that number represents something like 3 percent of the students in Mexican public schools.

Sisters Lesly, left, and Ashley Mantilla in front of their grandparents’ home.

Ryssdal: So play this out for me as you do in your piece. These people are American citizens. They have the right whenever they choose to come back here and work, so they could go through the Mexican school system and come and move to Des Moines. But they would do so without any of the cultural grounding that they would otherwise have.

Jarvis: Right. I mean, they will have missed out on the kind of education they would have gotten in America. Something that can happen with these kids is even though they have that right, they may not know it and they may not believe it. And the idea of coming back and of paying for college or finding a job can feel incredibly daunting. And in some cases, you know, I met some children who were worried that they might do something to lose their citizenship or that they would get in trouble if they did try to re-enter the United States even though they’re American citizens.

Ryssdal: There’s another kid in this piece — and I’m sorry I chuckle, but it’s a great little anecdote — Leo who was brought back to Mexico by his parents when he was like 6, he’s 15 now, and he thinks he’s an American because he eats pizza, but his mom is like, “No man, you’ve got an American passport.”

Jarvis: Yeah, Leo is a great kid. Very vocal and thoughtful about what the cultural differences are that that makes someone American or Mexican.

Fifteen-year-old Leo Gutiérrez Rojas, who grew up in Virginia, moved to Mexico when he was 6.

Jarvis: His mom really thinks that he’ll come back to the States. Which is something that, you know, when she talks about it, she cries. It makes her sad to imagine, but she also is sad to imagine that he would have his opportunities cut off by not coming back. You know, an example about Leo, he loves math. He wants to have a career in robotics, but at the school where he goes, he’s been put in the agricultural program where you learn to be a small-scale farmer of things like avocados and peaches that grow in this region.

Ryssdal: This is a very cold way to think about this, but this is a workforce that could be useful to American companies.

Jarvis: Yes. And if you think about the fact that the U.S. has already invested in their education before they left but then in a way, it doesn’t follow up on that investment. And then another economic way to look at it is for a society to function, you need an educated workforce and also people who haven’t experienced a lot of trauma and dislocation. That all will have an effect on what kids are able to do when they grow up.

Jarvis: She still doesn’t know. Something that I sort of noticed is that they love the idea of coming back until it gets closer and then it feels much scarier and more daunting. You know, in some cases they have other family members here that they could live with or that could support them and in other cases they don’t.