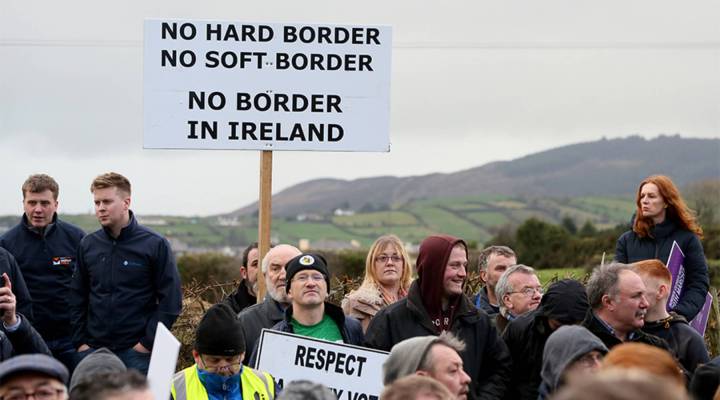 It’s called “the backstop,” and everyone in the European Union is talking about it: in France, it’s “le backstop”; in Germany, “der Backstop.” It’s all about the border between the British province of Northern Ireland and EU member the Republic of Ireland, and it’s part of the United Kingdom’s Withdrawal from the EU Agreement.

It’s also the single-biggest stumbling block on the path to a smooth and orderly Brexit.

If enacted, the measure would require Britain to stay in the EU’s customs union — perhaps indefinitely — in order to ensure that there is no hard border between Northern Ireland and the Irish Republic after Brexit.

Many British lawmakers hate the backstop and refuse to approve the withdrawal agreement unless it is removed or radically changed.

At a news conference after he met with EU officials in Brussels this week he said, “We agreed again today that the backstop is needed as a legal guarantee to ensure that there’s no return to a hard border on the island of Ireland.”

He also took a swipe at the political shambles in Britain.

“I think the events in London and the instability in British politics in recent weeks demonstrates exactly why we need a legal guarantee,” he said.

On this issue, Varadkar has overwhelming support in the Republic of Ireland, where there’s widespread concern that Britain leaving the EU without a trade deal could reignite the paramilitary war over the status of Northern Ireland.

In an interview with the BBC, Lt. Col. Michael Murphy of the Irish Defence Forces spelled out the dangers.

“You would have to bring back customs posts somewhere along the border, along the main roads,” he said. “You might have people using violence against those posts, and then police services from the north and south would be drafted in to protect the posts. That could ratchet up, and eventually you’d have to bring in the military right along the border once again to prevent the terrorists succeeding in what they wish to do.”

The backstop would prevent the re-emergence of physical border checks between the north and south.

But there may be another way of achieving the same goal. Lars Karlsson, former director of the World Customs Organization and former head of Swedish Customs, advocates a “smart” or invisible border: a combination of trusted trader registration, cellphone and GPS tracking, and vehicle license plate identification that would check trade flows and levy tariffs well away from the border itself.

“Instead of doing all these formalities by the border, you actually do them at the exporters’ premises and at the importers’ premises in a simplified way,” Karlsson told Marketplace. “Trucks do not need to be stopped and checked at a border post.”

The U.K. proposed this approach during the Brexit negotiations; the EU dismissed it as “magical thinking.”

But Karlsson said that many of these techniques are already in use around the world and have been successfully tested in an EU trial involving Norway and Sweden.

“That worked very well,” he said. “And remember, that was done under the European Union customs law and with the scrutiny and supervision of European Union institutions.”

Brexiteers claim that the success of the Scandinavian trial proves the backstop is a cynical ploy to use the issue of peace to lock the U.K. permanently into the EU’s customs union.

They also contend that the backstop could provide political benefits for Ireland’s Prime Minister Varadkar.

Paul Bew, a British academic historian from Northern Ireland, believes that Varadkar is whipping up anti-British nationalist support for his fragile, minority government. Bew, who wrote a paper denouncing the backstop as a potential threat to the peace process for the Policy Exchange think tank, argued that Varadkar is seeking to raise Ireland’s profile in the European Union in a way that panders to a powerful, historic sense of grievance and resentment.

“Ireland now has got itself a new mode of operating in Europe, which is very satisfying because you’re now beating up the old historical adversary,” Bew said. “‘Brit bashing’ is what they call it.”

But with the British Parliament in turmoil over Brexit and the British government in disarray, the Brits seem to be doing a pretty good job of bashing themselves.