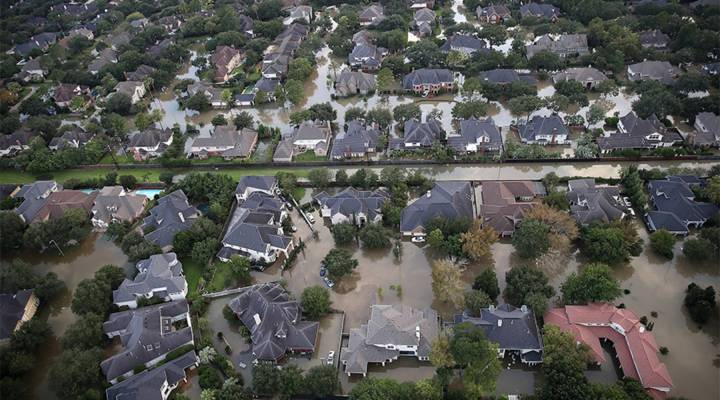 In Texas, hundreds of victims of the flooding in the wake of Hurricane Harvey are are suing the federal government. They say the U.S. Army Corps of Engineers purposely flooded their homes and should pay for the damage. The cases center on how the government managed Houston’s main reservoirs during the storm, and the outcomes could have implications across the country for who’s liable when disaster strikes.

On a normal day, when Houston’s not underwater, the Barker Reservoir is the perfect spot for a bike ride. The reservoir and a similar one near it are usually dry; they double as public parks.

Out walking the trails, Michelle Friede said like many people, she learned something else about the reservoirs after Harvey.

Most of the reservoir land is federally-owned, but some of it is private, so rows and rows of large suburban homes and gated neighborhoods sit within the boundaries. As the storm filled the reservoirs to the brim, those homes inside flooded. At the time, the Army Corps said that’s the way the reservoirs were designed to work.

“Quite frankly, our home should never have been built,” said Tim Schauer, who owns of those houses.

Schauer said his home took on more than a foot of water thanks to the storm. He and his wife escaped by wading through brown, sewage-filled water while dodging floating mounds of fire ants and snakes.

Tim Schauer, whose home lies inside Houston’s Barker Reservoir, next to his aquarium, his new post-Harvey hobby.

Now, he thinks back to how years ago, when he was going to check out the house with a realtor, the car went over a little hill.

“And I said, did we just go over a dam?” he recalls asking. “And she’s like ‘oh yeah, yeah, but that was built back in the ‘30s, and they didn’t know what they were doing, and it’ll never flood, the engineers allowed us to build because it’ll never flood.’”

Legal experts say both sides face an uphill battle. But attorney Vuk Vujasinovic said the case for his clients, who live inside the reservoirs, is different, because the Army Corps knew the homes were a problem.

“The government foresaw this would happen,” he said. “They foresaw it to the extent that they discussed having to defend litigation because of it.”

The U.S. Department of Justice is arguing the case for the federal government, and declined an interview request. But in court filings, Justice Department lawyers argue that it was impossible to avoid flooding somebody’s home. The homeowners, for their part, say the flooding was essentially a land taking, like when a government entity takes private property to build roads or bridges.

Peter Byrne is a Georgetown Law expert on “takings” cases. He said the homeowners may have a tough time arguing this case fits that definition.

“There is a long tradition in takings law even outside of the flooding context, that emergency actions to prevent greater disasters that impose losses on some property owners are not takings,” he said. If the homeowners do win these cases, Byrne said, it could make the federal government skittish about investing in flood control at all.

Hester said with climate change expected to spawn more intense and more frequent hurricanes, what happens with these cases could shape the legal precedent for future disputes over who’s responsible for the damage from stronger storms.

“Usually we try to give the government breathing room, to make mistakes, but to act in good faith,” he said. “But as the stakes keep getting higher, and we start seeing this happen more and more often, there’s a certain change of expectations as to what sort of care we expect.”

Back at Tim Schauer’s house, there’s a big new aquarium, his new hobby. He points out one tiny blue fish he’s dubbed “the lone survivor,” the only one that survived the flooding.

After the storm, Schauer re-painted his walls vibrant tropical colors, all light blues and turquoise. Big leafy plants line the entryway, and Schauer said the beach vibe is on purpose: the brown and tan colors the walls used to be just reminded him too much of the floodwaters.