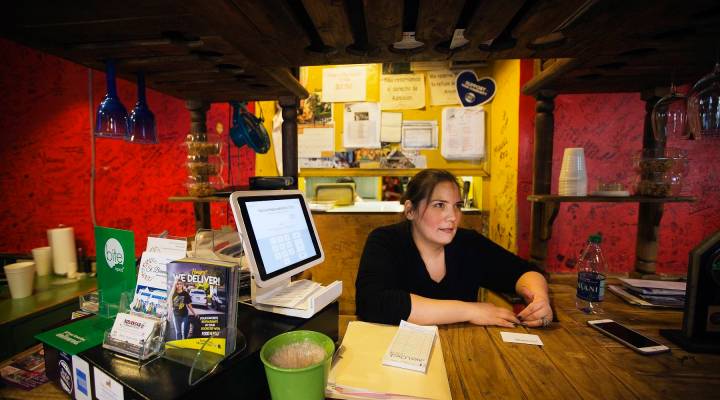 Editor’s note: Marketplace’s Andy Uhler is spending the week reporting about doing business on the Texas-Mexico border, during a time of intense debate over U.S. immigration policy and a push by President Donald Trump to build a border wall. Uhler is sharing some small stories along the way. Below is the second entry from his reporter’s notebook. You can read the other entries here.

LAREDO, TX — Officially, technically, legally, however you want to phrase it, any Mexican citizen crossing the border into the United States needs a visa. Anyone from the U.S. who wants to spend more than 72 hours in Mexico or plans to travel beyond the 16-mile border zone, regardless of length of stay, needs to get a visa to do that, too.

But the reality in a border town like Laredo, Texas is very different.

Sandra Bernal helps run her parents’ restaurant, El Meson de San Agustin, in Laredo’s San Agustin historical district. Her mom and dad came into the U.S. as teenagers and established residency. Sandra and her five sisters were born in Texas and are U.S. citizens. She lives and works in Laredo.

“A lot of people that are U.S. citizens work here (Laredo) and live over there (Nuevo Laredo),” Bernal told me after I finished paying for my mole chicken enchiladas and lemonade at El Meson de San Augustin.  She put it simply: Getting paid in dollars and spending pesos makes a big difference. “There’s no way that some people can live on that budget over here. They live like kings over there.”

People crossing the border from Nuevo Laredo, Mexico to Laredo, Texas, pay $0.25 (5 pesos). After paying the toll, they cross a 1,000-foot bridge to wait in line at customs and border patrol to show documents to get into the country. Depending on time of day and day of the week, the process can take hours. Pictured here on Monday, Jan. 28 2019.

Technically, a person is supposed to live where he or she works. Sandra said as long as border crossers mind their own business, and don’t make any trouble on either side of the border, agents aren’t going to give them any trouble.

Down here the border is fuzzy and many people speak freely about the way things work. I’ve gotten my fair share of head shakes and eye rolls when discussing the legality of what I’m being told.

“Everybody pretty much knows each other already,” Bernal said. “And we are so, like, one, that you can’t tell one city from the other or one citizen from the other because we all have family on either side. We’re just so connected, and the lines are so blurred.”