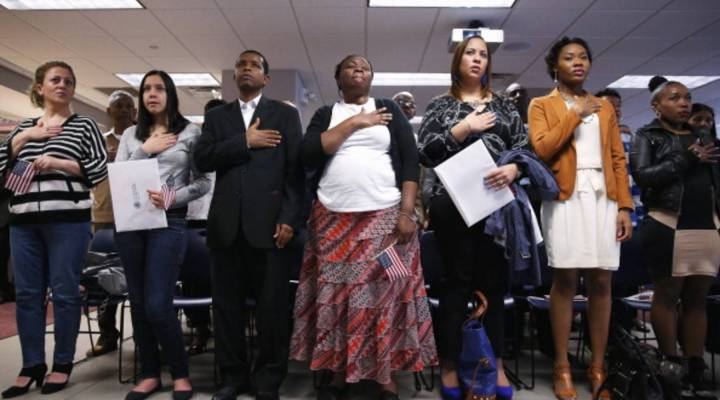 COPY
Immigrants stand for the national anthem before becoming American citizens at a naturalization ceremony held at the U.S. Citizenship and Immigration Services in New York City in 2013. John Moore/Getty Images
Fertility and the economy

Immigrants stand for the national anthem before becoming American citizens at a naturalization ceremony held at the U.S. Citizenship and Immigration Services in New York City in 2013. John Moore/Getty Images
Listen Now

For our series on how fertility rates are tied to the economy, we have been asking demographers, economists and other experts about their theories. A Centers for Disease Control and Prevention report that came out earlier this month sparked our interest in the topic. It showed that fertility rates in the United States are at historical lows, 16 percent below the number needed to reach replacement.

Jack Goldstone, a professor of public policy at George Mason University, told host Sabri Ben-Achour that historically, America had cultural subgroups that were more regionally defined. Populations in the South, the Midwest, and New England all had differing cultural expectations, so fertility varied as a result.

“We used to see higher fertility among the Hispanic population and the immigrant population.” That’s not the case anymore. Today, those subgroups, including immigrants, are moving toward having the same fertility rate as white women, which is about two children per woman.

Why is that? Goldstone said that in today’s America, there are more similarities with regards to fertility between people living in major cities than by geographic region. In essence, there’s more of an urban-rural divide than a regional one. When it comes to fertility, “its very much a question of desired lifestyle. We see more and more women, whether they are immigrant, minority or highly educated seeking to pursue a situation of greater autonomy and greater participation in the workforce,” Goldstone said. And when women work or get a higher education, they are likely to have fewer children.

Goldstone argues that to reach a high enough population to keep up with global economic competition, we need more immigration. In 2008, the U.S. Census Bureau estimated there would be about 450 million Americans in the U.S. by 2050. Its most recent projection from 2017 estimates just 400 million people. Those missing 50 million people can be attributed to lower fertility, especially among immigrants, Goldstone said.

“Someone once said America can’t get rich by bringing in other people’s children. Well, that’s the way America did get to be the richest country in the world,” he said. And the way to do that while maintaining a cutting edge over other growing economies in the world, Goldstone said, is to bring young workers to the U.S. from other countries. “We’re in a world where young people who can be productive workers are the new scarce resource. More than capital, more than oil, more than rare metals.”

This is the last of our mini-series on fertility and its link to the economy. Below is an edited transcript of Ben-Achour’s conversation with Goldstone.

Sabri Ben-Achour: So we’ve been asking different people there for their theories on why fertility is down in the U.S. What’s yours?

Jack Goldstone: I think it’s straightforward. The United States used to have a population that was divided into groups with different fertility. We used to see much higher fertility among the Hispanic population, the immigrant population, and we saw a larger number of unintended births, particularly among the African-American population. All of those things have changed, some gradually, some more dramatically. But the overall result has been a convergence of all groups across the United States toward the general fertility pattern of white women, which is a roughly two children per woman. The big differences now seem to be more with regard to education than with regard to ethnic or immigrant background.

Ben-Achour: So that’s interesting that different groups are converging. What should we make of that?

Goldstone: Well, the long-term trend in the 20th century across the United States has been a convergence of different groups and a blending of different cultural expectations. For example in the ’50s and ’60s, America had very distinct regional cultures — the South, the Midwest, New England all were considered very distinct in the set of values family patterns and so on. All of those things have evened out. It’s now the case that there’s more similarity between people in major cities and there are more similarities among rural and small-town populations. What we see with regard to fertility, it’s very much a question of desired lifestyle. We see more and more women, whether they are immigrant, minority, highly educated, seeking to pursue a situation of greater autonomy and greater participation in the workforce. And the more women engaged in the workforce, the more they develop a career ambitions, the fewer children they tend to have.

Ben-Achour: Do we actually need a stable or growing population?

Goldstone: It depends on your goals. But I think it’s important for most Americans, particularly those who are under 50 and have to think about “Can the U.S. economy continue to support my health care and my Social Security for another several decades?” If you want to have an economy that’s fast growing and competitive. you need more young workers. You need more high-skill, top-of-their-game energetic entrepreneurs and workers. And to get those, we need either higher birth rates or more generous immigration policy.

Ben-Achour: Some of our previous guests have mentioned that countries with particularly low birthrates have a lot of trouble raising them, and so the solution for them is immigration. Is that applicable here?

Goldstone: Yes. America used to have a higher population growth rate than European or Asian countries. That’s no longer true. And in fact the impact is so dramatic that 10 years ago the U.S. Census forecast America’s population in 2050 — you know, 30 years away roughly — to be about 450 million Americans. In the most recent projection, their new estimate is for about just under 400 million. So where did those 50 million potential workers go? That’s the loss of higher fertility in immigrants and minorities. So yes, the United States needs to think about how to keep its labor force growing and on the cutting edge.

Ben-Achour: By bringing in people.

Goldstone: By literally bringing in people. You know, someone said America can’t get rich by bringing in other people’s children. Well, that’s the way America did get to be the richest country in the world, and there’s no reason to expect that to change. In fact, it’s probably become more critical as birthrates in the United States have fallen.

Ben-Achour: There are people out there who complain or are fearful of immigration because they say or are afraid that it in some capacity might take jobs from Americans. But you’re pointing out that we need immigration to fill the gap in our fertility rate.

Goldstone: If our unemployment rate was still at 10 percent, I would say, “Hey, maybe it’s time to hold the line on immigration.” That’s not the world we live in. We’re living in a world where the biggest problem of employers is finding people to do the jobs that are open. There are more job openings in this country now than there are people who are unemployed. It’s also the case that our population is aging. That’s fine. We have a lot of seniors who are still active and productive. But over a 20-year period, if you have someone who enters the labor force at age 25 with the latest education and skills and spends the next 20 years improving their productivity, the economy benefits. So yes, the more young people, in a sense, the faster we grow, and we’re in a situation where it’s not just us. Even Japan and South Korea have started to change their policies to try and attract immigrants. This is a global competition. We’re in a world where young people who can be productive workers are the new scarce resource. More than capital, more than oil, more than rare metals, productive young people are going to be the key to growth.