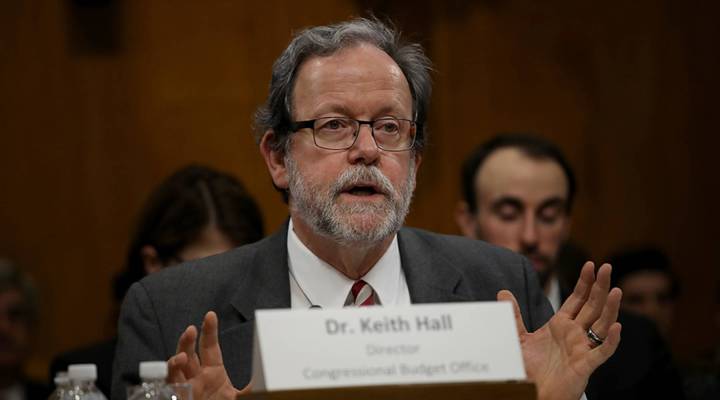 The Congressional Budget Office released two reports today — one on the agency’s 10-year economic forecast and one on its best estimates of how much the partial government shutdown cost. CBO Director Keith Hall talked about both those reports with Marketplace host Kai Ryssdal today. The following is an edited transcript of their conversation.

Kai Ryssdal: So you have quantified this shutdown for us. What are the headline numbers?

Keith Hall: Well, let me build up to it just a little bit. We think the effect on fourth-quarter [gross domestic product] of 2018 was about $3 billion. First quarter of this year was about $11 billion. And that $11 billion is a little bit smaller because two months of the quarter we have recovery.

Ryssdal: Right. Well, let me get you to the recovery then, sir. How much of that are we going to get back? Because people are going to have to go out and make up some of that spending, right?

Hall: That’s right. Federal workers get paid, federal government gets back to spending their appropriations — we think they’ll spend it all — so we think it will take about three months to get as much recovery as we’re going to get. So the net shortfall and it’s all over and done with is we think we’ll be down about $3 billion of GDP.

Ryssdal: It’s entirely possible, Mr. Hall, that we’re going to be back here again on the 15th of February. Without trying to pin you down one way or the other on what you think is going to happen, how bad would it be if we go through this all over again?

Hall: For the most part, it just starts again. But there is an impact. It’s a bit bigger if the shutdown is longer than something like five weeks. At some point, the lack of federal permits and certifications can start affecting the economy. And then, of course, the morale aspect of federal hiring. That can impact that over time.

Ryssdal: Well, to that morale point, if I’m a federal worker now and I’ve got three weeks of paychecks coming in — did you all model what federal workers may or may not decide to spend their money on in this three weeks that they’ve got money?

Hall: Not so much. I think the one thing that’s notable perhaps is because they’re getting a large paycheck, they’re withholding tax is likely to be a little too high.

Ryssdal: Huh. So that is the back pay, right? They’re going to get a chunk taken out of it.

Hall: That’s right. Because we have a progressive tax rate. So probably likely to get a little over withholding.

Hall: But we think they’ll get back to it, I’ll say about three months for it all to sort of get back as much as it is going to.

Ryssdal: With a nod to the fact that the Congressional Budget Office is nonpartisan and has been through its existence, this is kind of a subjective question, but I’m going to see what you say, and it goes like this: Is this any way to run a railroad?

Hall: Well, I can say this: When we hire people here, one of our selling points, of course, is that we work so closely with Congress; if you want to support public policy and better government, we are a good place to work. But we’re also a pretty safe place to work, the government in general. And so if that’s impacted, then it gets harder to hire people. That gets to be a problem.

Ryssdal: Alongside this report on the shutdown, sir, you released your economic projections for the next 10 years. It’s a regularly scheduled report that you all do. And I want to talk to you about economic growth. You say the growth is going to slow in the next year or so. Why?

Hall: Well, a lot of what’s happening now with the relatively strong growth is basic stimulus from the tax bill. And at some point, that stimulus is going to wane. In a sense, we’re going to pay for this above-trend growth with below-trend growth for a little while, we think. And, of course, under current law right now the spending caps go back into place, so we see a kind of a drop in federal spending in a couple of years. And also under current law the income tax rate decline from the law is going to go away. Income taxes will go back up in 2025, if you think that’s going to happen.

Ryssdal: Right. So that is the sequester, which people probably haven’t heard of in five or six years. That’s what’s still on the books. And also those tax cuts are due to expire in 2025.

Hall: That’s right, and that’s one of the differences in what we do. We’re estimating things under current law, not under current policy. So there’s always a risk that policy will continue.