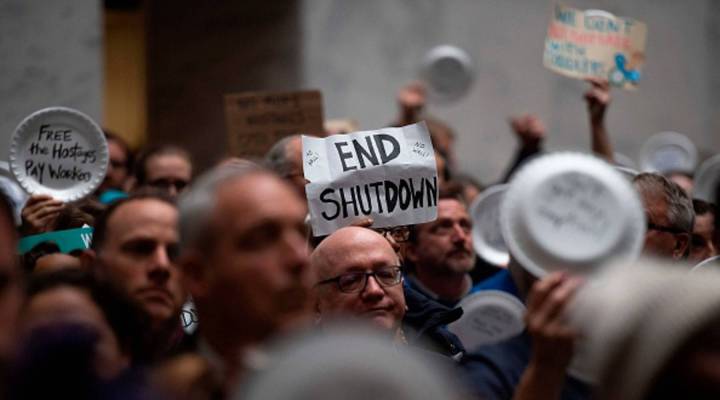 Federal employees holding empty plates stage a rally to call for a vote on the shutdown on Capitol Hill in Washington, D.C., on Jan. 23, 2019. JIM WATSON/AFP/Getty Images
Government shutdown 2019

Federal employees holding empty plates stage a rally to call for a vote on the shutdown on Capitol Hill in Washington, D.C., on Jan. 23, 2019. JIM WATSON/AFP/Getty Images

The U.S. is in the midst of the country’s longest government shutdown in history, which started Dec. 22, 2018.

Congress and President Donald Trump have — so far – been unable to negotiate a deal to fully re-open the government. Nearly 800,000 federal workers have been without pay during the partial shutdown, and about half of those are still going to work because they are considered “essential.”

Government workers aren’t the only ones affected by this closure. There’s a lot of business that can’t happen because of the partial shutdown. Restaurants in Washington D.C. are feeling the pinch without the usual volume of customers to serve. Even logistics for the Super Bowl could be compromised if the shutdown continues.

The only government shutdown that has come close to this one in length occurred from Dec. 16, 1995 to Jan. 6, 1996, a full 21 days. Parts of the government were stuck in limbo because President Bill Clinton and the Republican-controlled Congress disagreed over federal spending.

As this shutdown continues, more and more questions are surfacing about what it means for federal workers, government agencies and the economy over all. We want to help you navigate the uncertainty by answering your questions about this shutdown and what happens when it ends.

Fill out the form below with your query, and we will try to answer it.