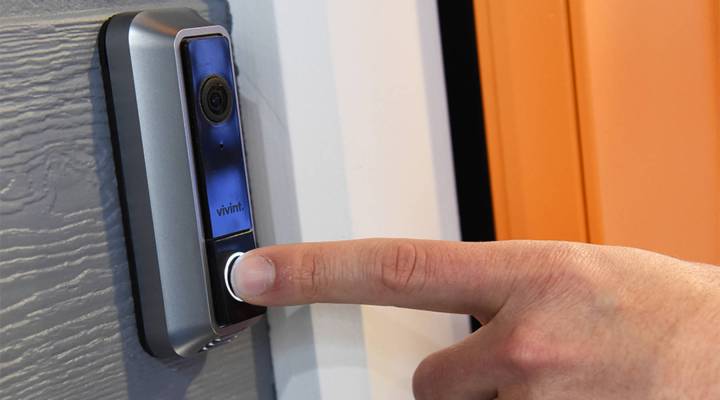 COPY
Part of the problem with doorbell cameras is that their owners are filming a lot more territory than the terms of service say they should, says Laura Norén, director of research at Obsidian Security. Ethan Miller/Getty Images
Marketplace Tech Blogs

Part of the problem with doorbell cameras is that their owners are filming a lot more territory than the terms of service say they should, says Laura Norén, director of research at Obsidian Security. Ethan Miller/Getty Images
Listen Now

Internet-connected doorbells with cameras built in are becoming very popular. Amazon-owned Ring is the best-known product. Google also has the Nest Hello. But the rise of doorbell video has privacy experts worried about the potential for misuse and abuse of these home surveillance devices. Users can shame people or unrightly label people or behavior as suspicious. And the companies that make this tech might have access to the video in ways customers don’t understand. Molly Wood talks with Laura Norén, director of research at Obsidian Security. She says part of the problem is that owners of video doorbells are filming a lot more territory than the terms of service say they should. The following is an edited transcript of their conversation.

Laura Norén: The terms of service put a lot of the onus on the person who installs the camera, and I think a lot of the people who own these cameras are not aware that they’re not allowed to point them at the public street or into their neighbor’s yards. I happen to be on the Ring platform myself as a user, and I can see that people are violating that particular point of the terms of service agreement left and right. It leads to a lot of community policing that might not be fair or just.

Molly Wood: What access does Ring or Amazon have to the videos that are filmed on these cameras?

Norén: Ring is pretty clear in its terms and conditions that people are allowing Ring employees to access videos, not live streams, but cached videos. And that’s in order to train that artificial intelligence to be better at recognizing neighbors, because they’re trying to roll out a feature where they use facial recognition to match with the people that are considered safe. So if I have the Ring cameras, I can say, “All these are safe people. Here’s pictures of my kids, my neighbors. If it’s not one of these people, consider them unsafe.” So that’s a new technology. They need to be able to train their algorithms to recognize who’s a person, what’s a car, what’s a cat. Some subset of the videos that are being uploaded just for typical usage are then being shared with their research team in the Ukraine.

Norén: No, we really have a version 1.0 understanding of consent procedures. I think as it’s framed now, one company taking a fairly substantial amount of profit from a system where most of the people ending up on the app, I’m imagining, are not the owners of the cameras. So the people benefiting from the service and the people profiting from the service aren’t the ones who are sacrificing their privacy. So there’s a big disjuncture there. We don’t have consent procedures that work at the group level.

Ring told us only a small number of employees can see videos and only with explicit consent.