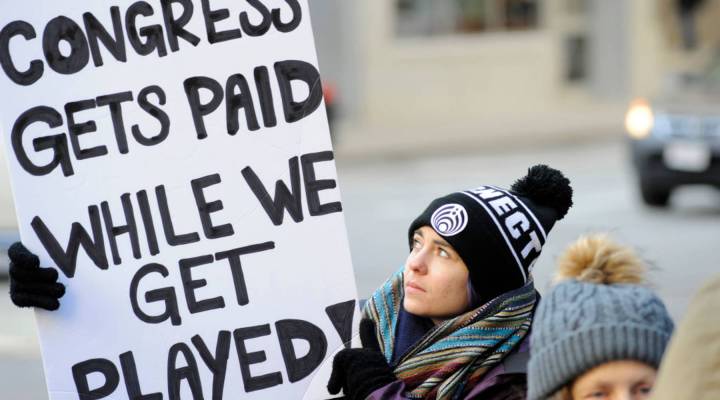 Protesters hold signs during a protest rally by government workers and concerned citizens against the government shutdown on Friday, Jan. 11, 2019 at Post Office Square near the Federal building, headquarters for the EPA and IRS in Boston. The rally was organized by The American Federation of Government Employees. New England has 516 EPA employees that is now down to a staff of 22. JOSEPH PREZIOSO/AFP/Getty Images
Government shutdown 2019

Protesters hold signs during a protest rally by government workers and concerned citizens against the government shutdown on Friday, Jan. 11, 2019 at Post Office Square near the Federal building, headquarters for the EPA and IRS in Boston. The rally was organized by The American Federation of Government Employees. New England has 516 EPA employees that is now down to a staff of 22. JOSEPH PREZIOSO/AFP/Getty Images

As President Donald Trump and Congress remain locked in a stalemate over funding for Trump’s border wall, the U.S. government shutdown entered its 24th day on Monday. According to the Senate Appropriations Committee, about 420,000 employees are working without pay while another 380,000 are at home on furlough. And while last Friday was a payday for these 800,000 workers, there were no paychecks. Officials in D.C. and Maryland told NPR that at least 7,000 unemployment claims were filed by federal workers and contractors in the last few weeks. As the shutdown, which as of Saturday is the longest shutdown in U.S. history, enters its fourth workweek, that number is expected to rise.

Going without a paycheck is a struggle for a large number of the affected workers, many of whom live paycheck to paycheck. They are not an anomaly in the U.S. According to a 2018 report by the Federal Reserve, “Four in 10 adults in 2017 would either borrow, sell something, or not be able pay if faced with a $400 emergency expense.”

Many of the workers who are not getting paid during the shutdown are based in or near Washington, D.C. — where the cost of living is high. In April of last year, the Federal Salary Council said that federal workers salaries are almost 32 percent lower than those of similar private-sector workers. And while some government jobs pay better than those in the private sector, the pay isn’t that much higher, according to a 2017 Congressional Budget Office analysts.

Having to go without two-week’s worth of pay as bills pile up could amount to a lot more than $400. To helps its members, the Coast Guard Support Program issued a five-page tipsheet that recommended those going without pay hold a garage sale or pick up a temporary job as a dog walker, babysitter or a mystery shopper. The tipsheet, first reported and published by the Washington Post, drew some criticism but financial experts interviewed by Marketplace said that the tips listed weren’t actually bad advice.

“Generating additional income by selling unneeded items or working a side hustle is good advice at any time, not just when you’re in a financial pinch,” Greg McBride, chief financial analyst at Bankrate.com, told Marketplace. “It’s probably not the advice people want to hear, but that doesn’t make it bad advice.”

“I actually think this tip sheet is full of sound financial advice. Is it all fun stuff to do? No way! But then a furlough at work is not a fun situation — financially, it can be a very serious situation,” she said.

Here is what advice they and other money experts had for government workers as the shutdown continues.

“If you find yourself in need of cash in a panic, try to resist the urge to use a credit card — which can end up costing you big in the long run,” said Priya Malani, founder of Stash Wealth. “Your best bet is to call the companies where you have bills due and explain your situation. Often they will be able to offer you the most cost-effective short-term solution.”

As the government shutdown neared the end of its third week, U.S. regulators such as the Federal Reserve, the Consumer Financial Protection Bureau and  the National Credit Union Administration issued a statement urging financial institutions to work with customers affected by the federal government shutdown.

“While the effects of the federal government shutdown on individuals should be temporary, affected borrowers may face a temporary hardship in making payments on debts such as mortgages, student loans, car loans, business loans, or credit cards,” the statement read. “As they have in prior shutdowns, the agencies encourage financial institutions to consider prudent efforts to modify terms on existing loans or extend new credit to help affected borrowers.”

According to McBride, creditors like mortgage lenders and car lenders should be your first call, since they tend to report late payments to credit bureaus.

“Explain your situation to see if there is any grace period or arrangement they can work out,” he said. “Try to make an arrangement whereby they will not report you to the credit bureaus as delinquent. This is a well-publicized shutdown and you won’t be the first to call and ask, but it pays to get out ahead of it.”

Don’t spend money on things that are not necessities

“In general, when your income is decreased or stops for a period of time, it’s important to be mindful of flexible spending,” Malani said. “Flexible expenses are those lifestyle-enhancing things that we never WANT to cut back on — think dining out, entertainment, shopping, gym membership, boozy brunch, etc. However, if needed, cutting back on flexible expenses can help you avoid overspending when your income drops. Don’t be afraid to call subscriptions like gym memberships, Rent the Runway, etc. and tell them your situation. They will often let you pause your subscriptions for a few months without penalty and we’ve even seen companies continue to provide full-benefits to government workers during the shutdown. It never hurts to ask.”

Financial experts said to cut out those costs, unfortunately even if those things are what’s making you happy during this difficult time.

“The absolute WORST thing anyone can do — whether it’s this shutdown or just losing a job in general — is to keep on living the same way you have been,” Thakor said. “It’s so easy to want to do that because you are likely quite emotional over this situation — feeling everything from anger to [being] overwhelmed to outright fear. To self soothe it can be easy to justify spending by saying, ‘This is such a @$@# time, I’m going to treat myself.’”

However, you will probably regret that decision later, when your debt and expenses pile up.

Be honest about your situation

“The second worst thing is to keep the fact that you are going through this situation to yourself — especially if you get invited to do social or other activities that will cost money,” Thakor continued. “You may feel embarrassed by not wanting to say this isn’t a good financial time to participate. But by being honest you actually free not only yourself but who knows — maybe your employed friends are also struggling with finances and by bringing it up it’s a blessing as you help them not feel so alone either.”

After missing their paycheck on Friday, federal workers furloughed due to the partial government shutdown apply for substitute teacher positions at a job fair held by the Fairfax County Public School system Jan. 11, 2019 in Falls Church, Virginia.

“If you can generate other sources of income, it can help you avoid having to cut back as much,” Malani said. “Ideally, if you have a side-hustle that you can spend more time on, you may be able to generate some additional cash. Selling items you don’t need on eBay or via a garage sale is a good idea, not just in times of financial hardship.”

Selling your things a few times a year — not just in a time of need — could help you build up an emergency fund, she added.

“Don’t just have a garage sale on your own,” advised Thakor. “Combine with a few other families and create sort of a ‘farmers’ market’ type of sale so you don’t feel sadness as things are sold but solidarity and connection to others facing the same difficult situation.”

Start thinking about the future

Shutdowns seem to be more common nowadays. There was one 16-days long shutdown during President Barack Obama’s presidency in 2013. The current shutdown is the third shutdown under President Trump and — as we previously mentioned — is the longest shutdown in U.S. history. As such, government workers might need to start thinking about how to prepare for such situations in the future.

“There is a lesson here, which is that it is important to plan for the unexpected. Having some, even a small amount of precautionary savings, can help a lot toward softening the hardship and stress associated with a decline in income,” said Annamaria Lusardi, founder and director of the Global Financial Literacy Excellence Center at The George Washington University School of Business.

This is a lesson not just for the workers, but for the government too.

“This is something that the government can also help doing: rather than providing only suggestions on what to do when facing a shock, they could promote what to do to avoid being unprepared for a shock,” she continued. “For example, they could promote setting up an emergency fund for employees or remind employees about that fund, for example around tax refund times, the end of the year and when they get a promotion. Saving is hard, but doing it in small steps and over time, makes it possible to build up that small amount that can help a lot when things go sour.”