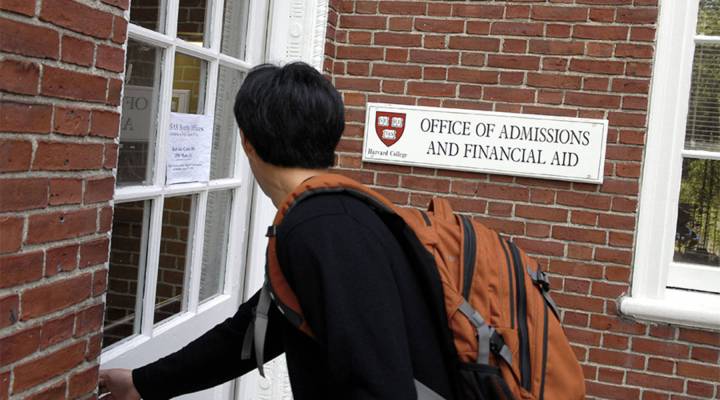 High school seniors across the country have just wrapped up their college applications, and are undoubtedly anxious for decision time this spring. This year, some students worked hard to present themselves a little differently, amid an ongoing suit against Harvard University, which claims Harvard’s admissions policies unfairly discriminate against Asian American applicants.

At Bard High School Early College in Queens, New York, several students of color weighed in on what the college application process was like, especially when admissions policies involving race were making national news.

“There is this notion that once you’re like a black female interested in STEM you won’t be discriminated because it’s such a small percentage.” — Bard student Rachelle Monteau.

“[Race-conscious admissions policies] are helping the few, but [they’re] also excluding the others that are equally as qualified that should get it, but they aren’t, because colleges just need this certain amount.” — Bard student Jeita Maharjan.

Jeita Maharjan, who’s South Asian, said she decided to stop worrying about how race might affect her application.

“It’s not something that I’m terrified about because it’s going to happen regardless, and it’s something I knew that was happening already,” she said.

The idea that schools like Harvard might be limiting the number of admitted Asian students has created a niche industry. Companies like Top Tier Admissions and Asian Advantage College Consulting say they can help Asian and Asian American students remove stereotypes from their applications to break through and appear distinctive.

“That sounds like it’s trying to say to kids ‘don’t be too Asian’ which is kind of just leading to more suppression and more discrimination,” she said.

The question of how to bring up race in a college application had Hannah Oscar, who’s African-American, wondering whether she should include it at all.

“Earlier in the college process, I heard a lot of people saying, ‘you know of course you’re going to get in because of like how you identify as African-American,’” she said. “In that time, I felt like I needed to prove myself in other ways and say I could get into college without having to identify myself as African-American.”

That dilemma can also add to the pressures all students face to enroll in SAT classes, get essay advice, and meet with admissions officers.

“This is a business,” said Bishoy Yacoub, a North African student. “People are making bank over my stress.”

Still, Zoe Donovan said she acknowledges that the college application process is all about being distinctive.

“This whole process is about branding yourself,” she said. “The whole process of like, applying is really just to make yourself look your best and look the most unique.”

Donovan, who’s mixed race, says she struggled with finding ways to look unique on her college applications when everyone else is trying to be unique … at the same time.

“As, like a mixed race person I was like I’m going to be another mixed race person who writes an essay about being mixed race, but I did it anyway,” Donovan said. “I think that’s definitely on a lot of people’s minds, especially people of color, because we’re all fighting against stereotypes constantly.”

In Bard’s class of 2016, 91 percent of students enrolled in college within 18 months of graduation.

When it comes to selecting a school, Jeita Maharjan said a recent trip to a small private school upstate got her thinking about how race factors into the college experience.

“When I was there, I saw like two black faces, I think one Asian, but it just didn’t feel like someplace that I could express myself the way I wanted,” Maharjan said. “And because of that, I decided that I wouldn’t apply.”

Sofia Balayut said when it comes to her college selection, the diversity of the college itself will be a big part of her admission decision.

“Although all of the colleges I’m applying to, because most are are primarily white institutions, I’ve still looked for a certain level of diversity in terms of race because I hope that that would bring diversity of experience, diversity of thought,” she said.

Balayut says that means focusing on a variety of schools, including smaller liberal arts colleges, instead of the Ivy Leagues.