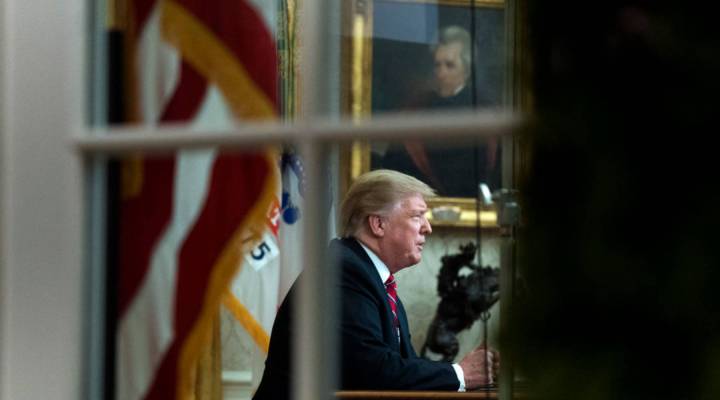 In a somber televised plea, President Donald Trump urged congressional Democrats to fund his long-promised border wall Tuesday night, blaming illegal immigration for what he called a scourge of drugs and violence in the U.S. and framing the debate over the partial government shutdown in stark terms. “This is a choice between right and wrong,” he declared.

Democrats in response accused Trump of appealing to “fear, not facts” and manufacturing a border crisis for political gain.

The back-to-back remarks by President Trump and Democratic leaders appeared unlikely to do much to break the logjam that has left large swaths of the government closed. Three weeks into the shutdown, the strain was starting to show with hundreds of thousands of federal workers on track to miss paychecks this week.

Addressing the nation from the Oval Office for the first time, Trump argued for spending some $5.7 billion for a border wall on both security and humanitarian grounds as he sought to put pressure on newly empowered Democrats amid the extended shutdown. 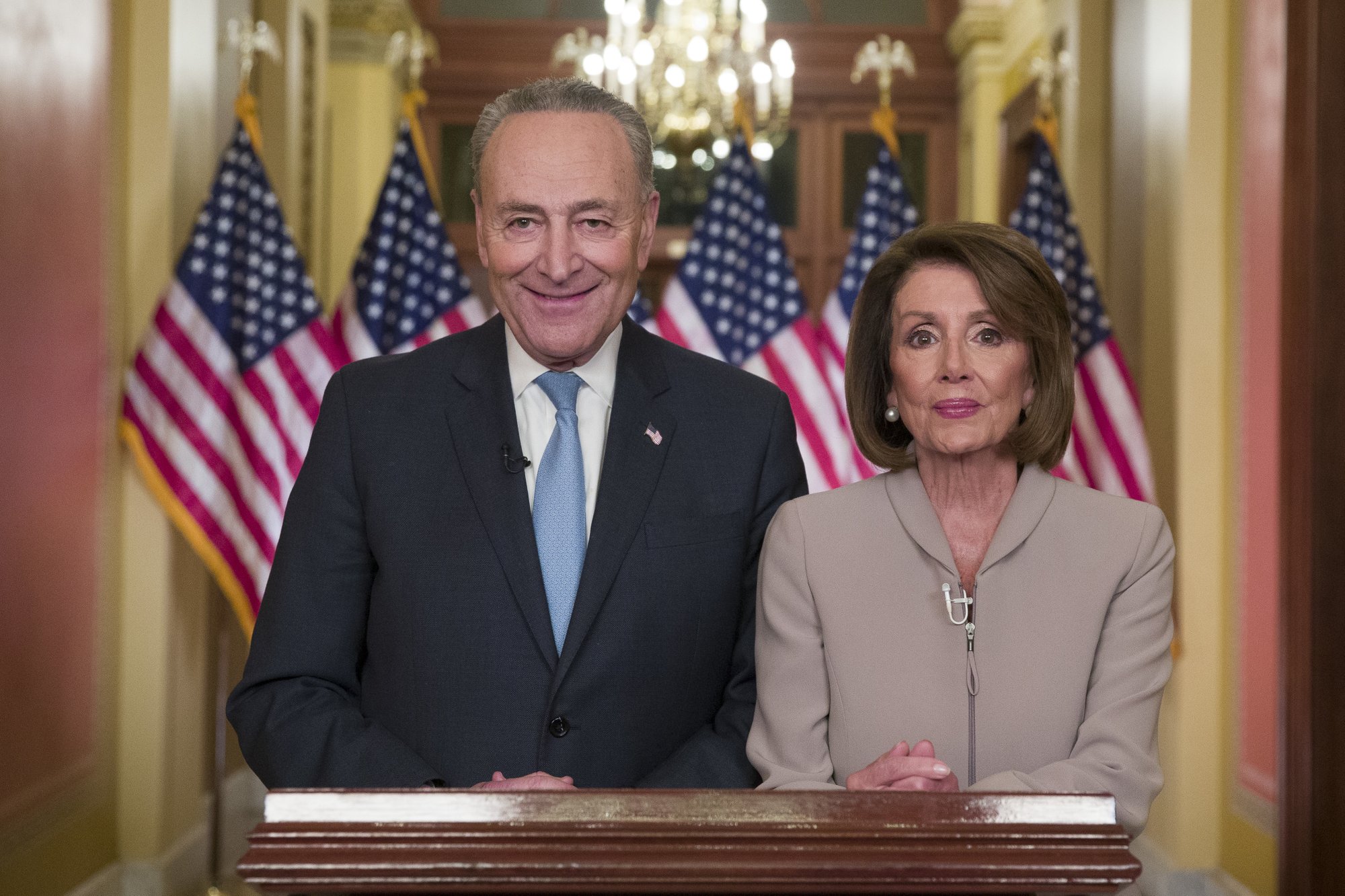 Trump, who will visit the Mexican border in person on Thursday, invited the Democrats to return to the White House to meet with him on Wednesday, saying it was “immoral” for “politicians to do nothing.” He claimed they could resolve the standoff in “45 minutes,” but previous meetings have led to no agreement as Trump insists on the wall that was his signature promise in the 2016 presidential campaign.

Shifting between empathetic appeals and the dark immigration rhetoric that was a trademark of his presidential campaign, Trump asked: “How much more American blood must we shed before Congress does its job?”

Responding in their own televised remarks, Democratic House Speaker Nancy Pelosi and Senate Minority Leader Chuck Schumer accused Trump of misrepresenting the situation on the border as they urged him to reopen closed government departments and turn loose paychecks for hundreds of thousands of workers. Negotiations on wall funding could proceed in the meantime, they said.

Schumer said Trump “just used the backdrop of the Oval Office to manufacture a crisis, stoke fear and divert attention from the turmoil in his administration.”

Overall, Trump largely restated his case for the wall without offering concessions or new ideas on how to resolve the standoff that has kept large swaths of the government closed for the past 18 days. Speaking in solemn tones from behind the Resolute Desk, he painted a dire picture of killings and drug deaths he argues come from unchecked illegal immigration.

Trump ticked off a string of statistics and claims to make his case that there is a crisis at the border, but a number of his statements were misleading, such as saying the new trade deal with Mexico would pay for the wall, or suggesting through gruesome examples that immigrants are more likely to commit crime.

Trump, who has long railed against illegal immigration at the border, has recently seized on humanitarian concerns to argue there is a broader crisis that can only be solved with a wall. But critics say the security risks are overblown and the administration is at least partly to blame for the humanitarian situation.

Trump used emotional language, referring to Americans who were killed by people in the country illegally, saying: “I’ve met with dozens of families whose loved ones were stolen by illegal immigration. I’ve held the hands of the weeping mothers and embraced the grief-stricken fathers. So sad. So terrible.” 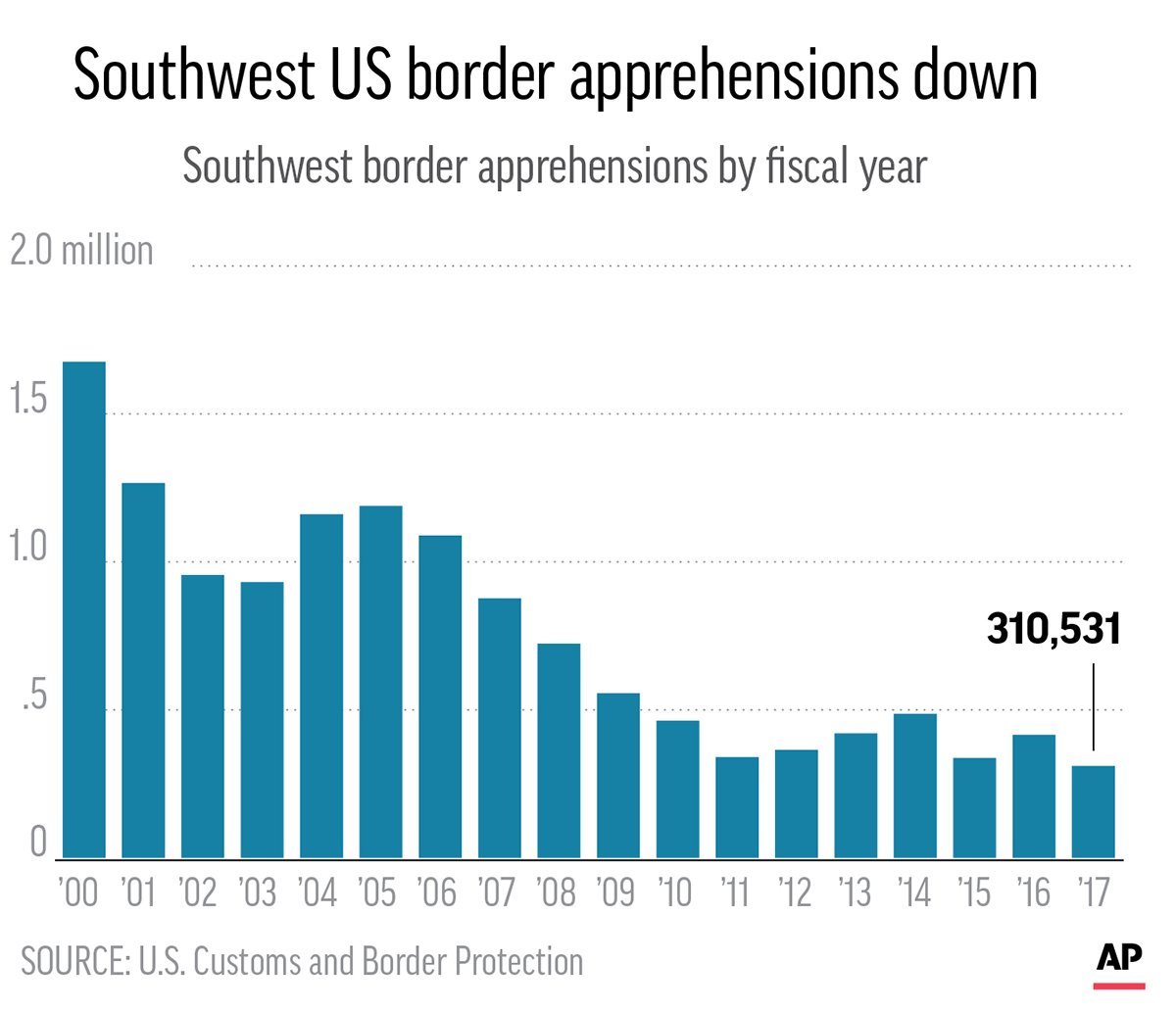 The president often highlights such incidents, though studies over several years have found immigrants are less likely to commit crimes than people born in the United States.

Trump has been discussing the idea of declaring a national emergency to allow him to move forward with the wall without getting congressional approval for the billions he’s requested. But he did not mention that Tuesday night.

The partial government shutdown reached its 18th day, making the closure the second-longest in history. Hundreds of thousands of federal workers are going without pay, and government disruptions are hitting home with everyday Americans.

Trump was nearly halfway through his 9-minute address before he mentioned the wall, describing it as a request from law enforcement rather than his longstanding political pledge. He also suggested that his proposal to build the wall from steel, rather than concrete, was a concession to Democrats.

Trump sought to put the blame on Democrats for the standoff, saying they “will not fund border security.” In fact, House Democrats passed legislation the day they took control of the House that offered $1.3 billion for border security. And Senate Democrats have approved similar funding year after year.

Seeking to keep up pressure on Trump and the Republicans, Pelosi said the House would begin passing individual bills this week to reopen some federal agencies, starting with the Treasury Department to ensure Americans receive their tax refunds. The administration says it will act on its own to ensure the refunds.