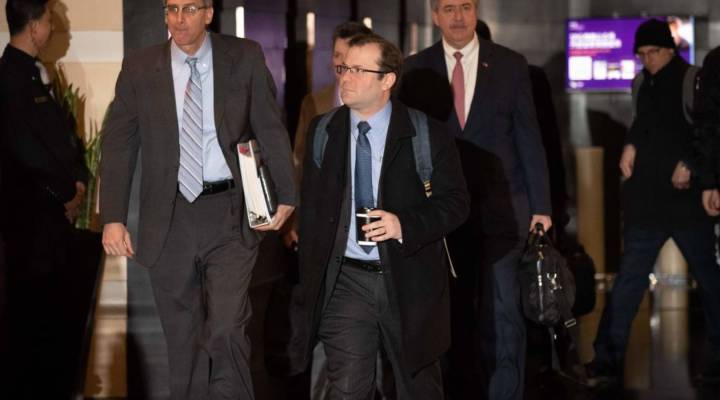 Members of the U.S.trade delegation to China leave a hotel in Beijing on Jan. 7, 2019. U.S. negotiators are headed into talks with Chinese counterparts as the two countries seek a deal to end a trade war that has raised fears of global economic turmoil. Wang Zhao/AFP
Trade showdown

Members of the U.S.trade delegation to China leave a hotel in Beijing on Jan. 7, 2019. U.S. negotiators are headed into talks with Chinese counterparts as the two countries seek a deal to end a trade war that has raised fears of global economic turmoil. Wang Zhao/AFP

A new year, a new round of talks between the U.S. and China.

Officials from both countries are meeting in China this week in the first face-to-face interaction they’ve had since last November, when they agreed to a 90-day cease-fire in their trade dispute.

Since March, the U.S. has slapped tariffs on $250 billion worth of Chinese goods, while China has placed a series of retaliatory tariffs on U.S. goods totaling $110 billion. The U.S. is pushing for greater market access in China (which has been accused of making U.S. companies share tech secrets in order to do business there) and it wants China to buy more of its products.

But, given who’s been sent to the negotiations, don’t expect any major breakthroughs this week, said Joshua Meltzer, a senior fellow in the Global Economy and Development program at the Brookings Institution.

Given the stakes involved, meetings like these are typically handled by the Treasury Secretary or the Secretary of Commerce, according to Eswar Prasad, an economics professor at Cornell University.

This time around, though, the U.S. has sent members of the Office of the U.S. Trade Representative, including Deputy Jeffrey Gerrish, USTR Chief Agricultural Negotiator Gregg Doud, and Ted McKinney, the Under Secretary for Trade and Foreign Agricultural Affairs at the U.S. Department of Agriculture.

The reason? Prasad said the Trump administration views Treasury Secretary Steven Mnuchin as being too soft against China.

Mnuchin has been a more moderate voice in trade talk discussions, with reports indicating he’s against the trade war between the two countries, whereas U.S. Trade Representative Robert Lighthizer and his deputy Jeffrey Gerrish view the need for a tougher stance on China and trade.

Not even Lighthizer was sent, though — Gerrish is leading the talks instead. Before they bring Lighthizer to the table, Prasad said the U.S. is trying to see exactly what sort of offer China is willing to put on the table first.

China is very particular about hierarchy, Prasad explained. Which is why it was unexpected when the country’s top economic adviser — Chinese Vice Premier Liu He — attended the first day of discussions.

“Liu’s participation in the meeting, held at the ministry’s premises, signals that China is attaching high importance to the talks, even if the main participants this time are mid-level officials,” Bloomberg wrote.

China is in the midst of an economic slowdown and its stock market ranked as world’s worst performer in 2018, ending down by 28 percent. President Donald Trump said the state of the country’s economy is giving China an incentive to negotiate.

After these discussions, Trump is expected to hold talks with Chinese Vice President Wang Qishan later this month at the World Economic Forum in Davos, Switzerland, according to the South China Morning Post.