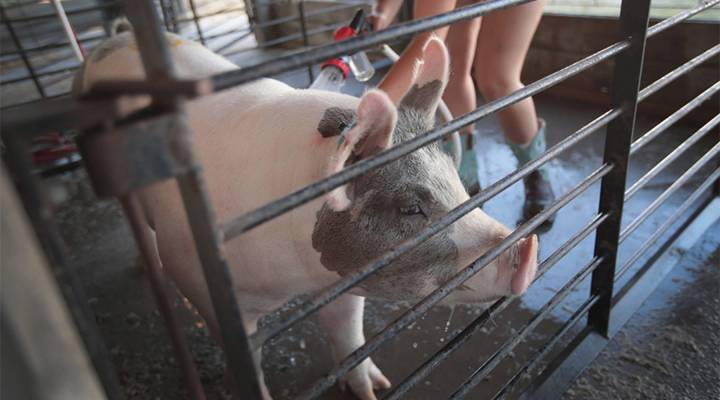 COPY
A hog is prepared for showing at the Iowa County Fair in July in Marengo, Iowa. Scott Olson/Getty Images
Government shutdown 2019

A hog is prepared for showing at the Iowa County Fair in July in Marengo, Iowa. Scott Olson/Getty Images
Listen Now

Valuable economic data from the federal government is not always released during government shutdowns, which can leave American farmers unsure on how to price and sell crops. It’s already been a volatile year for American agriculture. Soybeans and pork, among other products, were slapped with tariffs by China, Mexico and Canada. The Trump administration offered aid to help relieve the financial burden of these tariffs, but with the partial government shutdown, that aid is no longer accessible to some farmers. Brian Duncan, who raises hogs and crops on his family farm in Illinois and serves as the vice president of the Illinois Farm Bureau, spoke to Marketplace host Kai Ryssdal about these issues and the future of American farming. The following is an edited transcript of their conversation.

Kai Ryssdal: There are a couple of things we want to talk about. First of all, the shutdown — is that affecting you at all in terms of being able to get market prices for the hogs or any of that sort of data stuff?

Ryssdal: What kind of data would you be depending on? What does the government have, what does the [U.S. Department of Agriculture] have that you want?

Duncan: Well, sure. Coming up on Jan. 11 is a major supply-demand report which projects prices for the upcoming year, usages, things like that, on a national and global level. So that’s data that’s important to us as we plan for next year — actually now this year’s crops. In other shutdowns, we’ve lost access to that data, but so far, we are getting that. As we go on, the supply and demand report will be one that we’ll miss going forward.

Ryssdal: What about the federal aid that the Trump administration put on to help some of the farmers and folks like yourself who are being hurt by the tariffs? Those payments, it’s my understanding, have stopped, right?

Duncan: Sure, they have. A lot of farmers, myself included, went in and were able to sign up last year prior to the shutdown. I still have not signed up for the corn aid. We didn’t finish harvest until New Year’s Eve day on corn, rotten weather here. And I’ve spoken with some farmers who would like to go in here and apply now, prior to the Jan. 15 deadline, but obviously because our offices are closed are unable to do so.

Ryssdal: Well look, this is actually really interesting because as I talk to you it occurs to me that you’ve got a bunch of time-sensitive things that are dependent not on man but on nature, right? You’ve got to plant, you’ve got to get the sows in to breed them, or whatever you do with hogs, and it’s not like that stuff waits.

Duncan: No, it doesn’t. And, you know, this is the winter here. We’re three or four months away from planting season. So there’s not the sense of urgency out here. Kai, if we were having this discussion in three months, my tone would be a lot different.

Ryssdal: Fair enough. Let me take a very quick turn to trade and the tariffs. As you know, better than most probably who are listening, the Chinese government put tariffs on American hogs, and the Farm Belt has been hit by those tariffs. There are negotiations now happening in Beijing. You taking any hope, any solace from that?

Duncan: We are keeping a very close eye, especially what’s going on in China, this week and hopeful to see some resolution, some steps taken on both sides to resolve these ongoing disputes.

Ryssdal: One hates to pry here, Mr. Duncan, but between the shutdown and the trade stuff and the tariffs and the [United States-Mexico-Canada Agreement] and China and Mexico and all of that, how long until this really starts to bite you in the shorts?

Duncan: Oh, it already has. Agriculture’s taken a huge hit. And you just don’t have to take my word for it. Iowa state economists talking about the pork industry in general, losses in excess of $2 billion on an industry between China and Mexico. I mean we are on the front lines of this war and paying some pretty high economic costs. The Farm Belt has already gotten to experience the realness of these trade wars.