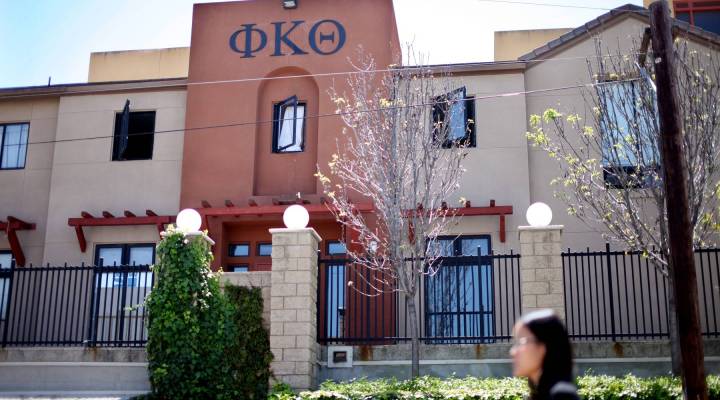 COPY
Greek organizations "occupy this unique position where they are both dependent on universities and separate from them, and they are big businesses," author Alexandra Robbins says. Above, the Phi Kappa Theta fraternity house at San Diego State University in California in 2012. Sandy Huffaker/Getty Images
Shelf Life

Greek organizations "occupy this unique position where they are both dependent on universities and separate from them, and they are big businesses," author Alexandra Robbins says. Above, the Phi Kappa Theta fraternity house at San Diego State University in California in 2012. Sandy Huffaker/Getty Images
Listen Now

This time of year, parents and students all over the country are making choices about college. It’s one of the biggest investment decisions they’ll make in their lifetime. In addition to choosing what school to go to and what to major in, another big part of that decision is whether they should join a fraternity or sorority. Journalist Alexandra Robbins followed two real-life fraternity brothers for an entire school year to get a picture of Greek life today. She talked with Marketplace’s Amy Scott about her upcoming book, “Fraternity: An Inside Look at a Year of College Boys Becoming Men.”

Amy Scott: I think a lot of us have images in our minds of what fraternities look like. I mean, I grew up in a college town. There was a house we knew to avoid because a stereo might come flying out of the window and that’s not really an exaggeration. What was the biggest surprise for you following these two students for a year?

Alexandra Robbins: Well, you know, it’s not so much as a surprise as I was trying to look at this from a different point of view. I didn’t want to write what everybody sees in the media because that’s just sort of a general stereotype. People don’t usually think about fraternities this way, but it’s a major reason they continue to thrive. When you send your son to college, he might be nervous or a little lost or unsure of how to make friends. Healthy fraternities can actually be comfort zones for these teenagers, especially on campuses that don’t have other resources specifically for young men. A number of the students I interviewed said their fraternity is sort of like a second family to them.

Scott: This is big business. I mean, you write in the book that fraternities and sororities control at least $3 billion in student housing. How does that relate to the power these organizations have on campus?

Robbins: Greek organizations are very powerful on campus. They kind of occupy this unique position where they are both dependent on universities and separate from them, and they are big businesses. Predominantly white fraternities and sororities do own at least $3 billion in college student housing and they manage several hundred million dollars in annual revenue and foundation assets.

Scott: Predominantly white. That’s an issue that you talk about in the book, the lack of diversity.

Robbins: When groups are diverse, they are less likely to succumb to group think, which is what can get some fraternities in trouble. But some chapters are cost-prohibitive in the predominantly white groups. I don’t think it spoils the plot of the book to share that Jake, a freshman I’ve followed through recruitment and pledging, was really disappointed when a minority guy who was otherwise doing great in the pledge process had to drop out because he couldn’t afford dues. I think diversity is an area in which fraternities could improve and doing that would ultimately make them much healthier.

Scott: You’ve mentioned the dues. I mean, how much does it cost to be a member of a fraternity these days? It’s not just the dues, but the dress code and in some cases the gear they need for activities.

Scott: You know, the image in some ways is justified. I mean, the fact is that fraternities do wind up in the headlines for things like sexual assault or racist, sexist or homophobic behavior. Are those just, you know, individual bad apples, or did you find something inherently rotten in the system that allows this to happen?

Robbins: Actually, my researcher and I conducted an analysis of every negative incident we could find publicly reported online between January 2010 and June 2018 and what we ended up finding is that the percentage of fraternity chapters that we see in the headlines is actually pretty low. About two-thirds of fraternities are not the ones that we see negatively depicted in the news, maybe even more if you count the multicultural fraternities the service fraternities and all the other kinds of fraternities out there that we don’t often hear about.

Scott: When you talk about the bad behavior that does happen, what are some things that colleges and the larger national organizations themselves can do to try to mitigate that?

Robbins: Some fraternities can bring out the best in students, some can bring out the worst. But schools can provide more resources to young men to show them that they don’t have to fall within this box of what’s been called toxic masculinity, that there are other ways to express masculinity and other ways of becoming an adult than what stereotypes and societal expectations might suggest.